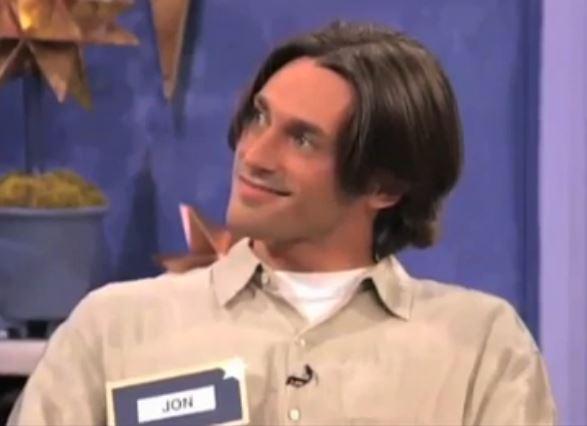 Watch a 25-year-old Jon Hamm Lose on a Goofy Dating Show
Mad props to whoever unearthed a video of a young Jon Hamm, with a seriously questionable haircut and goofy grin, competing on a ridiculous dating show called The Big Date. While it looks like something from an SNL sketch ...it's 100% (all too) real. I bet the woman who rejected him (!) on the show is cursing the stars right now. Because an "evening of total fabulosity" with Jon Hamm pretty much sounds like the most amazing big date ever.

Fast Food Chain Bans Putin
In an effort to take a stand against Putin's Crimea strong-arming—while drumming up sales to boot!—the Mexican fast food chain Mighty Taco has announced the Russian leader can't eat at any of its New York-based restaurants. But hey, they're nothing if not fair; Putin will apparently be welcomed back if he stops "picking on people." A taco-less existence shoudl teach him a lesson, right?

Man Breaks Into Massage Parlor, Eats All the Hot Pockets
A Notre Dame student, for reasons that remain unclear (except for the obvious delicious factor) decided it would be a grand idea to break into a massage parlor using a flower pot, smash stuff, mow through half a box of Hot Pockets and some Drumsticks in the kitchen, then put mac 'n' cheese in an antique oven before passing out and nearly starting a fire. To be fair, though, who hasn't been in that exact situation before?

Details Revealed on Rift Between Anderson Cooper and his Brother
Weird. Sad. Weird. Delightful TV host Anderson Cooper has apparently been on the outs with his older brother, Chris, for 35 years. Apparantly Chris got so upset about his mom's therapist meddling in his love life, he cut off all contact with the family (um, drama queen much?) Meanwhile—Anderson—who along with his brother is a Vanderbilt heir, recently made a crack about inheritances being a "curse"...which some have interpreted as a putdown of Chris, who lives off the estate.

Whew. And we thought our family life was complicated...