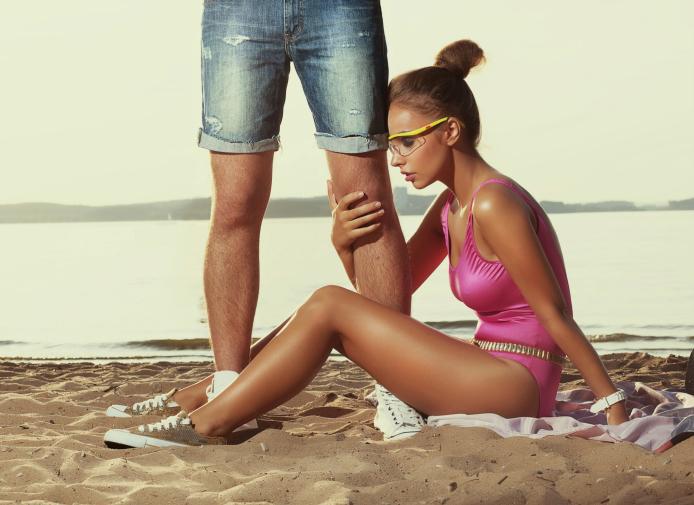 Raise your hand if you've ever fantasized about an ex. Arm up? Because mine sure is.

But here's the thing: as much as we'd like to believe the pretty little lies of romantic comedies, running back into the arms of a former flame rarely turns out pleasantly. Sometimes it's your fault. Other times it's your ex's. More often than not, it's simply that the stars (still) aren't aligned for you two crazy kids to make it.

Knowing that it likely won't work, why do we do continue to covet our exes? Below are the most common reasons we succumb to the yearning...and why it won't (or may) work.

If you want to return to the good ol' days, wear some jellies and listen to a mixed tape. Don't use nostalgia as a reason to run back into the arms of your banished boo. Though you never believe it when you're suffering, there will be others. Lots of others.

Sure, you had some good times with your former lover. But remember: your ex had time to get familiar with your body and kinks. You two might not have had earthquakin' romps in the beginning, but you'll probably only (conveniently) recollect the nights of burning passion that came later. Someone else can get you there—but these things don't always happen overnight.

Maybe you were in a bad place when you dated. Perhaps you destroyed everything and realize that you missed out on something awesome. If you're aware of your errors and want to give it another go, it's worth a shot. Just know: your ex might not be so forgiving.

Allow me to contradict my previous statement—people (usually) don't change. It is possible though. For example, did you date an alcoholic whose addiction tore your relationship apart? If your ex has made a conscious effort to fix the problem (therapy, AA, etc.), a second chance is worth consideration. Key word here is "consideration," however. Don't enter this situation blindly.

5. Your Family Wants It

It's a tale as old as time: your family can't stand your current squeeze and begs you to reconsider your ex. Your family may know best, but inquire why they clamor for your former love. Maybe they saw something that a detached diva like yourself missed. Or, more likely, it could be that they're nosey and bossy. It's worth a conversation, but don't let their opinions be the do all, end all.

6. You Had Amazing Chemistry

While it's easy to forget this, chemistry does not equate with compatibility. Being able to stare longingly into each other's eyes doesn't mean you have what it takes to last as a couple. An explosive, magnetic chemistry with another person is often just fickle hormones talking.

7. You Don't Think Anyone Else will Love You

This is a dreadful feeling. I wish I could say something wise to evaporate the gut-wrenching insecurity we all experience at some point or another, but I've got nothing. So I'll just say this: don't run back to your ex if you're doing it to feel better about yourself. This is the sign of an unhealthy relationship. It may take awkward first dates, an OkCupid account, a matchmaker and a fortune teller, but it is totally possible to find another love. Promise.

No. No. No. No. NO! Just no. This is evil. Don't toy with another's emotions because you can't get laid. Find a FWB (not your ex) if necessary, but don't delve back into the valley of the past just for cheap kicks.

This one is tricky. Usually, this feeling stems from chemistry, nostalgia or boredom, but we're too wasted on a crazy cocktail of hormones to identify the source. Talk to your friends and try to figure out why you're really craving this person. Is it a legitimate reason? Side note: movies don't portray love accurately and are not a good measure for relationship accuracy. So do not base your feeling on a wine-fueled evening watching The Notebook.

You have the same friends. You like the same music. Geez, we might as well just fall back into the same pattern! Hold up—no. Don't do it. Maybe this is a sign that you two were meant to be just friends in the first place. Because guess what, those things that irritated you back then aren't going away.

Bottom line: you're not doing anyone any favors by re-enlisting in a love war.

Image: Let it go, let it gooooo. Courtesy of, ThinkStock