A Frozen Virgin No More: What Happened When I Finally Watched Disney's Mega-Hit 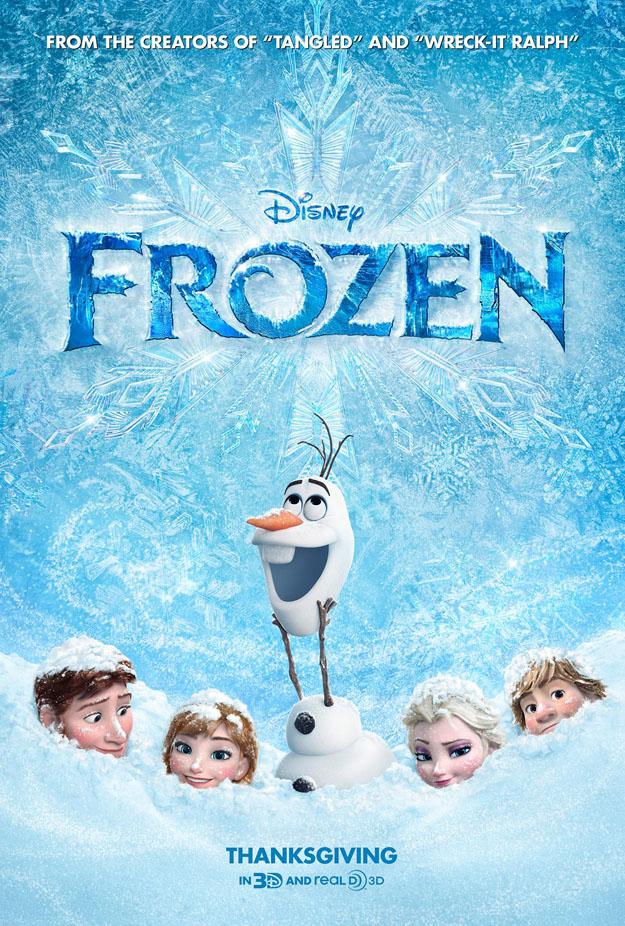 ​Until last night, I had managed to stay almost entirely insulated from the cultural phenomenon that is Disney's Frozen. The entirety of my knowledge about the film was:

1. The poster has a blue background and some cool font.
2. The main character is a girl. Don't remember what she looks like.
3. There are some animals involved. I think.
4. Apparently there's a boatload of awesome songs because they've all become YouTube cover sensations (not that I've actually watched one yet).

Finally, I decided to see what all the fuss was about, so I rented the DVD and plopped down with my keyboard to take some notes while watching this supposedly insanely awesome movie that everyone and their mother and their dog and their dog's mother loves.

Below are my thoughts as this grand saga unfolds. (If you've managed to stay under a rock longer than I have . . . spoilers abound!)

Oh Disney, you and your love of all things "exotic." Of course this movie opens with some pseudo-tribal rain dance choir shit. Of course.

So there are two princesses of Arendelle (the kingdom's name this time around): Anna and Elsa. One (Elsa) has magical powers, while the other (Anna) does not. Do I foresee a storyline about the power of sharing?

Well this got serious fast. Elsa just bombed Anna in the face with a magic snowball, and I'm slightly concerned that this movie has opened with infanticide. Now these two sisters can never hang out because, well, Elsa might kill Anna. Isn't that kind of a universal issue with siblings, though?

Elsa and Anna's parents are about to leave on a trip for "two weeks," which means: Death shall abound! After a predictable RIP to the 'rents, the masses gather for elder sister Elsa's coronation. A snazzily tuxedoed (and touped) man struts onto the scene and exclaims, "Arendelle: a most mysterious trade partner. Open those gates so I may unlock your secrets and exploit your riches!" There he is, our evil capitalist, courtesy of Disney, the evil capitalist. (No capitalist will out-capitalist Pocahontas' corrupt Governor Radcliffe, though, am I right?).

Anna's stoked about the possibility of getting laid now that there's a party at the castle . . . "At least I've got a chance." Eye roll.

Oh wow, I've barely finished typing and there he is, Prince Hans. Jesus, she ordered a boyfriend and got her delivery faster than a pizza.

OK, what the fuck language is this coronation in? Latin? I'm not smart enough for this.

Prince Hans to Anna approximately 1.7 minutes later: "Will you marry me?" Really? REALLY?

OK good, lovebirds Anna and her hot-and-heavy Prince Hans are separating so Anna can go find Elsa (after the Queen predictably froze, like, everything and then fled). Maybe Anna will go on a solo journey where she'll discover herself and her independence and come back and have a longer-than-5-minutes conversation with this guy pre-matrimony so she can, yanno, make sure he's worthy of THE REST OF HER LIFE.

Now I'm concerned: How is Anna going to find food in the middle of this snow desert she's crossing after running from the castle? I guess I'm "involved" at this point. Maybe.

So Elsa's song while building her new dream mansion (you go girl, very Beyoncé) is just . . . whoa. They've added some serious vocal range to Disney tunes since my day. She's shooting frozen fractals from her fingertips and belting about it.

Holy Hans Christian Andersen . . . Elsa's totally sexed herself up for her new solo life. I kinda love that.

Seriously though, how is she eating?

Oooh, now Anna meets a new guy (ice merchant Kristoff). A Disney romance storyline involving a parallel pursuit? I'm trying to rack my brain as to when Disney's done this before . . . John Smith had, like, five minutes of competition with Kocuom before his army bro shot Pocahontas' betrothed dead, but that's about it.

I'm liking this sleigh ride convo between Anna and Kristoff. Pretty thrown by this more realistic dialogue as the two get to know each other (and Kristoff points out Anna's flat-out insanity over this Hans dude).

Well, Anna finally gets her damn snowman (named Olaf). And, aw, he loves summer. Cute. The three amigos make it to the castle, together. Yay for camaraderie and teamwork, yada yada. Now let's see what comes of the sisters' reunion.

SERIOUSLY, ELSA? YOU'RE GONNA SHOOT HER WITH THE ICE AGAIN? AGAIN?

So now Anna's heart is "frozen" (movie title tie-in!) and her cold heart can only be healed through an act of true love. Obviously they should go back to Hans for that, seeing as he's her fiancé and all. I see where they're going with this . . . touché, Disney.

Oh good, here's Hans about to give what will be an obviously ineffective smooch, and then Anna's almost gonna die and then Kristoff's gonna come back. Get to it.

Oh. My. Fucking. God. Disney has gone Fight Club. This is an EPIC twist!

Anna saves herself with an act of love, by blocking Hans' blade as he tries to kill Elsa. That. Is. Awesome. Didn't even need the dude. Love it. (Heart bursts.)

And love will unthaw the ice that covers Arendelle! Aw yeah.

All in all, I think I definitely get the mass appeal of this movie. This was different than many other Disney films, most notably in the romance department. The heroine played the field (albeit unintentionally, but it's progress) and even though she made the wrong call, went back to the wrong dude, and had to have a half-melted snowman explain to her that she and Kristoff might be more than just homies, it's still a major upgrade from a lot of Disney (and all other kids') movies. Even though the love story was a big focus, it ultimately led to Anna rescuing herself, sans dude (not that Disney's always knockin' on the ladies—don't forget Ariel not only spearheaded her own release from Ursula's clutches, but also hauled ass to save a zombied-out Eric).

Were there parts when my mind wandered out of vague boredom? Sure. Would I tweak the style of animation? Yep. But, as much as I've fought it, I've totally joined the ranks of the Frozen freaks. Now, where can I find those YouTube covers . . .