My Abortion Was A Hard Choice—But The Right One 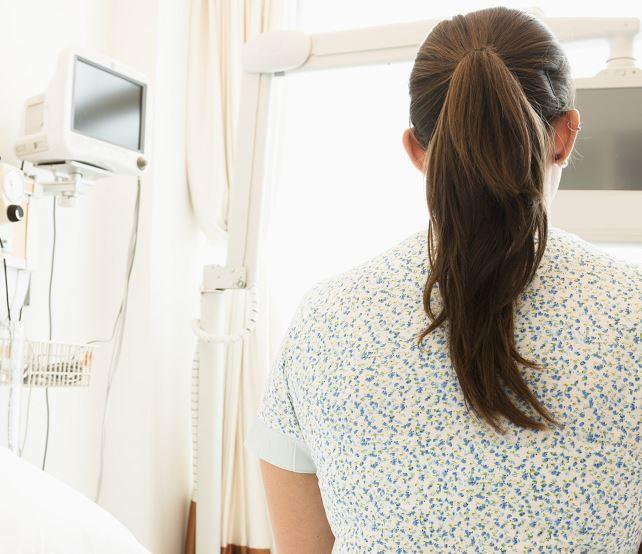 For all the pro-choice fervor that has always, and always will, thrive in me, I was shocked by the staggering sadness that overcame me in the wake of this choice.

There is blood on my hands. The nurse, a young woman in pink scrubs, apologizes as she sops up my excess blood from the table, from the floor. She was just supposed to draw a sample, but having pulled the stopper almost all the way out before inserting the syringe into my vein, she accidentally created a hungry vacuum that was already at capacity. My blood flows freely, with nowhere to go except everywhere.

I feel distant from myself, from the blood that's all over. It's mine but not a part of me anymore. It is useless now. It is waste.

It drips down my arm, forming a pool in the palm of my hand. And even then, I remember thinking: It was too on the nose, too obvious a symbol. Very fucking funny, universe, I thought. But try a little harder, hm?

Outside, in the waiting room, my then-boyfriend, Will, waits. He is not allowed in until the procedure actually begins. By the time the procedure will actually start, I'll be so high on painkillers that I'll hardly need him. But now, as my anxiety and my guilt stack upon one another, now is when I wish he were here, to hold my stupid, bloody hands.

"These things happen," the woman from our college health center tells me. "When you're irresponsible."

She doesn't know that I'd been taking birth control when I got pregnant. It was the kind that allows you to purposefully skip periods, so I was already more than eight weeks pregnant by the time I realized something was amiss. By then, it was too late for a chemical procedure (just a cocktail of pills, some water, no problem).

The abortion takes place during my next trip up from the Claremont Colleges in Southern California to the San Francisco Bay Area, where Will, who graduated a year before me, lives. I am 22 years old, just weeks away from the honors art show I've spent all year preparing for, just a month shy of college graduation.

Will does not love me, but I cannot accept that yet. We've been together for three years, and I love him with the breathless desperation you can only love your first love with.

"What are you going to do?" he asks. Get an abortion, I tell him, and even then, I know he's relieved.

They make Will turn away when I take off my pants. This is so absurd to me that I laugh out loud, a belly laugh. It makes everyone, Will included, uncomfortable. Surely, they know how we got into this predicament? They cover my lower half with a paper gown, and start me on the IV of drugs that will take me so far away from myself, from understanding what is happening, that when the horrible, sucking sound starts, I giggle.

Later, the memory of this sound will fill me with guilt.

Will holds my hand just like he is supposed to. I stare at the ceiling and laugh some more. There is a stupid poster with the most ludicrously tacky dolphins swimming through a rainbow above me. Just look at the dolphins, ladies, the poster says. And it'll almost be like the baby you made isn't being sucked right out of you.

When the abortion is over, Will holds me as I weep, ugly, deep heaving sobs, because I know an ultrasound was performed, but I never got to see the baby. Somehow, this feels like the greatest injustice, the greatest loss. Will does not say anything.

We are in the basement of his parent's house, his high school room with the Tiger Woods poster on the wall. It is a ludicrous place to tear yourself apart with guilt over an abortion. It is also the perfect place to do so.

I know my abortion was the right choice. I was in no place to have a baby. I was too young, not ready. And as in love as I was, I was also with the wrong man.

I have never once wondered if I should have had that baby. Nor have I ever questioned, on a macro level, if it was right for me to have that choice.

Still, I think of the blood on my hands.

For all the pro-choice fervor that has always, and always will, thrive in me, I was shocked by the staggering sadness that overcame me in the wake of this choice. Later, I would realize, it was my body that was sad, not me. A division that is dubious at best, I know, but there are moments when the divide throws itself into stark clarity. This became one of those times.

Pregnant bodies do not want to have an abortion, no matter how sound a choice to the brain. The body howls with grief at the absence. It's my body that tears up now at the sight of happy babies in strollers, and that cramps and coils as if searching for the baby that is gone.

Several weeks after my abortion, I get a job as a children's bookseller. "Do you like kids?" the hiring manager asks me. And I practically jump out of my seat, reassuring him. "YES, YES, OH MY GOD, YES," defending myself against the accusations that never come. I assure him that I love kids, that I am awesome with them, that my experience as a tutor and as a softball pitching coach will be invaluable. He believes me, even if I don't believe myself. He shows me pictures of his kids, and I coo and pretend to sneeze when I feel tears, unbidden, welling in my traitorous eyes.

The job ends up evolving into the beginning of my career in children's literature. I become the Children's Department Director for that company, a chain of bookstores, and then leverage that position for one in marketing on the publishing side. I shift my focus in graduate school from short fiction to children's writing. My first children's book comes out next year. It turns out, I do love kids. But I didn't when I started that job, a job I wouldn't have wanted so badly if it didn't prove to me (and also, prove to Will; I was always trying to prove things to him), that just because I had an abortion didn't mean I couldn't deal with children.

The blood that pooled in the palm of my hands—it was not a waste.

If I had never had an abortion, I may never have sought a job that would lead me to a career I love. I would have never written the manuscript that was inspired by a career of storytime with children.

It's true that a pregnant body does not want an abortion. It subjects the woman who lives there to misery in the wake of one. But that may be a good thing.

If I had not known what the misery was, hadn't felt it on my shoulders, would my desire to have children now be as powerful? It certainly wouldn't be as well informed. I have suffered morning sickness, and I suffered the loss of life that grows inside of me. I have looked at myself as a potential parent, and found myself wanting. Now when I say I want to bear children, it comes from a place of experience. Certainly not the experience I had anticipated. But experience nonetheless.

I still work with children, and I still write for them. I do this with blood on my hands, and I do this with pride. My body and I are on the same team now, and we agree. We are ready.

If you like this article, please share it! Your clicks keep us alive!
Tags
abortion
advice
essay
pro-choice
health
wellness