Sometimes I Regret Becoming A Mother 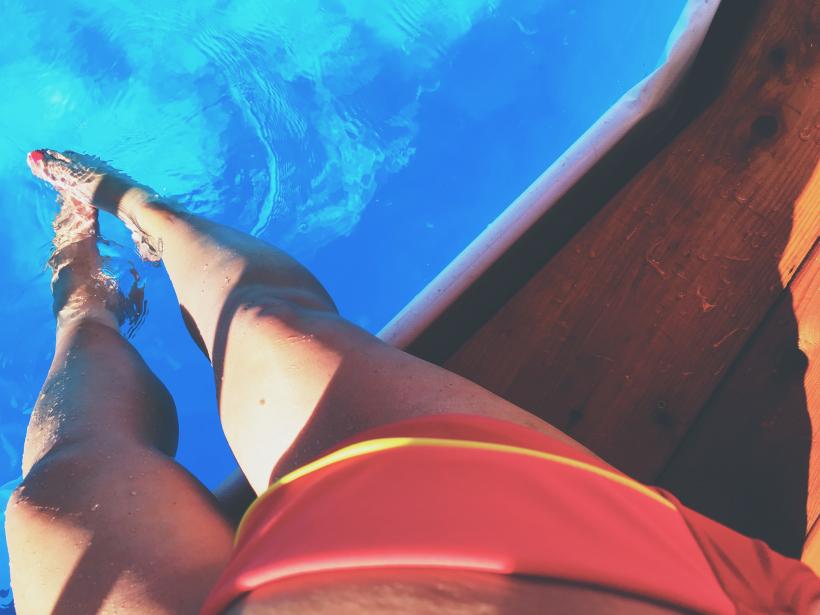 Sometimes I just need to say “I don’t want to do this.”

I feel pretty shitty about it, if I’m being honest.

There is the smallest sliver of light blinding me through the gap between our blackout curtains, the only indication that morning is coming.

Well, the light… and the 4 year old tapping on my face.

Religious people: “Sunday is the blessed day of rest.”

I use the sliver of retina-piercing light to find the pajama pants I discarded at 11:57 PM, after I spent the previous two hours cleaning up the hurricane that is my house.

They are on the floor; I only have to step on two Hot Wheels, a Lego, and a dog to find them.

I follow Max, taking the stairs one at a time because I have a tendency to fall, and it’s FRICKING DARK STILL.

The only reason I’m even willing to entertain this bullshit is because 5 am is a no-good time for Max to build a wooden block skyscraper, which will inevitably crumble, waking his sister; OR an equally poor time to chase the cat, which will end in a wound that invites a shitshow of hysteria.

We made this rule, thinking, like the ingenious parents we are, that a delayed opportunity to watch Mighty Machines for the 763th time would encourage his overzealous brain to give in to the darkness and go the hell back to sleep.

There are some moments, days even, I just genuinely wish I hadn't had kids.

I want to drink my now barely-lukewarm tea — ginger-peach with honey — in solitude, sitting in my favorite green chair, which is in the center of the living room, despite being shredded by the cat that Max likes to torment when I'm too busy picking up toys to notice.

I want to never get up and get anyone waffles, butter applied to every cranny equally, and melted, god forbid it not be melted — I CAN SEE THE BUTTER, COLD BUTTER IS GROSS — cut in perfectly symmetrical squares — NO, THOSE ARE RECTANGLES — served with the — BLUE FORK, ONLY THE BLUE FORK — and a glass of milk — BUT NOT THAT CUP, THAT IS NOT MY FAVORITE CUP — ever again.

I don’t mean this in the exaggerated, Wow, parenting is just really challenging, but I LOVE IT SO MUCH! way.

I mean it in the I am packing my bags and going to the beach. I’m going to lay in the sand and sip a beverage — a blended one, made by someone else — and read a book, one with words that have more than two rhyming syllables, one without any illustrations at all. I’m going to sleep all night, all the way to 6 am instead of 5, and I’m going to have tea that is still hot. In SOLITUDE! I am not going to be a parent anymore. Parenthood was an awful decision way.

I mean this with the conviction of a toddler with an iPad.

I feel pretty shitty about it, if I’m being honest.

What kind of mother doesn’t love all of the precious moments spent with her child? The snuggly stories. The kisses. The moment of awe when they discover the magic that is a butterfly in flight.

There are some moments, days even, I just genuinely wish I hadn't had kids.

When I’m writing $1500 worth of checks for summer camp, and thinking, I could go to Hawaii. ALONE.

When I’m cooking a dinner that I know someone isn’t going to eat because THE THINGS ON THE PLATE CANNOT TOUCH EACH OTHER.

When I’m mopping up the fifth spilled cup of water/juice/milk in TWO HOURS.

When I’m trying to plan a family trip that is absurdly limited to, like, three houses on Airbnb, because I need a place with SIX BEDS, two bathrooms minimum, and a TV. With Netflix.

When everyone else is like, “Man look at all of this FOOD. I just did my monthly trip to Costco!”

When I'm up all night (OK, from 2-4, but that's long enough) because my 4 year old wants to talk about the origin of man/how a car engine works/where the moon goes during the day/why we have to be in a hole when we die.

Until I take the show away and then they both start screaming — at me.

My first baby, a girl, died at 21 weeks of pregnancy. Because getting pregnant with her was infinitely more difficult than I thought it would be, and because she subsequently died, motherhood just seemed theoretical.

I thought I’d never get there. I wanted it desperately.

I swore to the universe, to God, to whatever thing might be listening, that if I could just get pregnant, just this one time, and if a baby could grow in me and be born, whole and complete, and not at 21 weeks, I would never complain. Ever.

I would never complain about middle of the night feedings or dirty diapers or colic or the cost of raising a child.

If I could just have a healthy child.

And then I got pregnant. And I had the child. And the awesome reality of motherhood, the depth of affection, its life-altering power, the way it would change me, set in.

But with that awe comes the exhaustion.

The exhaustion of a baby up all night, of endless loads of laundry, the act of servantry that is being a parent. The fear of the incredible responsibility that you have just undertaken.

And the relentless nature of it all.

The smell of a freshly born infant brings with it the weight of a mountain, the disorienting nature of a thick fog.

The thousand screaming tantrums of a toddler who cannot be soothed or contained makes you question if you’ll even survive to see their adolescence.

And the adolescent that tells you they hate you, refuses to eat what you cook, tells you they love their dad more than you, after you puked for three straight months and then had to replace all of your shoes with a size larger because your feet never went back to the size they were before they swelled with the progesterone of pregnancy.

And maybe, sometimes, you just don't want to do it.

Maybe, a lot of times, you just don't want to do it.

We've been made to believe that the joy is in the gratitude. That we should be thankful for all we have.

Write in your gratitude journal.

Remember all of the people who want children so desperately and can’t have them.

We have been made to fear that should we complain, lest it might be snatched from us, should we for even a moment wish we hadn't done this. Some sort of universal karma. A punishment for your lack of gratitude.

Because if we are not deeply affected in the most profound way, all the time, we must not be doing it right.

I can't sustain life under the weight of that expectation. I can't get back up the next day and go out again and make the waffles under the mountain of pressure that is “appreciate this moment, because it’s fleeting.”

Sometimes I just need to say, “I don’t want to do this.”

But I won’t promise to love it.

Many days, there will be moments that there is no job more appealing, more rewarding, more sacred than motherhood.

But there will also be moments that almost anything seems like a better alternative.

If you like this article, please share it! Your clicks keep us alive!
Tags
motherhood
parenting
Children
I quit
toddlers
babies
pregnancy
miscarriage
mental health
Selflessness