3 Great Things About Me — Because Of My Mental Illness 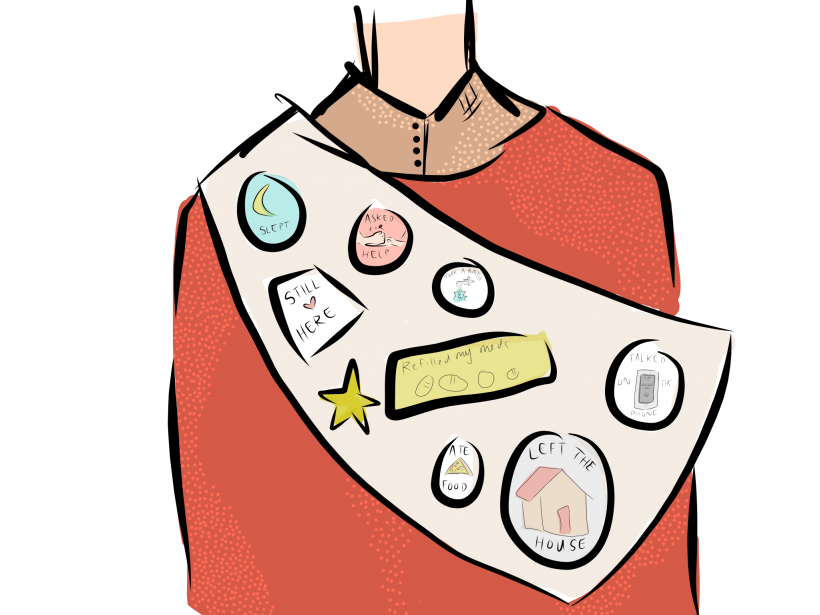 My first course of action in just about any situation is to stop and remind myself that everyone involved is bringing just as much baggage and human weirdness to the table as I am.

There are many parts of living with a mental illness that are less than awesome. That's what we tend to focus on, even in mental health activism, which isn't by any means a bad thing. It's important that the world gets a realistic representation of mental illness when our culture is constantly churning out hyperbolic, romanticized depictions of the mentally ill.

But that doesn't mean it's all doom and gloom. I tend to view my mental illness as value neutral, just something I have, like hair and eyes and fingernails. There are some things, though, that I really appreciate having gained from living life on the neurodivergent side. It's not all rainbows and butterflies, but there are a few face-up pennies and surprise bonus chicken nuggets thrown in the mix. Here are three of them:

I’m still here, and that’s a huge deal. As someone who once lived a full week without the presence of their actual mind and sanity, I have a pretty high-tolerance for the amount of shit that can go down in this thing we call life.

I’ve completed exposure therapy twice, once for childhood trauma, and again more recently for the PTSD I developed thanks to that very week I spent completely out of my mind. If I can sit in a room for weeks on end and voluntarily face the worst moments of my life over and over, I can grit my teeth through just about anything.

I never feel comfortable when people tell me I’m “strong” for having survived a mental breakdown, because it implies that the helpless and vulnerable (ie: weak) moments of my mental illness are some sort of failure to my recovery.

But resilience? I don’t need to wait for anyone to tell me that’s what I am; I know it already.

I’ll admit that my neurotic little head is not the best at more “real-world,” common sense markers of observance. My obsessive-compulsive brain is hardwired to turn inward, so things like directions, instructions, and spatial awareness are super difficult for me. What I lack in concrete street smarts, though, I more than make up for in my ability to read other people. I know how to ~feel~ shit out.

I am often the first to recognize that someone is “off.” I know how to approach people who seem unapproachable. I can tell when someone is asking for immediate interaction, and when they’d instead prefer an empathetic gesture followed by respect for their personal space.

I am extremely sensitive to nonverbal feedback, and I know how to articulate the abstract intricacies of a given conflict when someone asks me for advice or input. I know when to listen and when to offer help. I may struggle with more casual conversations and fumble through small talk with new people, but my ability to engage with others on an intimate, one-on-one level is what makes me appear to so many as outgoing, social, and friendly.

Full disclosure: I’m predisposed to feeling everybody else’s feels. It’s part of my nature. That being said, the empathy I’ve gained from both loving and being a person with chronic mental illness is some next-level Regard For Your Fellow Man bad-assery.

The idea that absolutely everyone — regardless of their circumstance or personality — is a complex and valuable slice of life worthy of respect and regard is the Life Lesson that has felt the most natural to me. And to be perfectly candid, it is my absolute favorite thing about myself, even if we’re including being double-jointed and knowing that cool trick where you fit your entire body through a Post-It note.

My first course of action in just about any situation is to stop and remind myself that everyone involved is bringing just as much baggage and human weirdness to the table as I am.

This isn’t to say that I’m some perfect saint who never screams at cars that cut me off or thinks of Tea Party members as “Those People,” but I’m much better at catching myself in those situations than I would be were I not born with the genetic psychiatric luck of a black cat shattering thirteen mirrors under a ladder.

Being Othered is the actual worst, and pretty much the driving force in 99.9% of what’s messed up in the world. I try to use my empathetic disposition to combat that in whatever small way I can.

So many of my symptoms make me feel like a self-centered trial to endure for my loved ones (AKA: human garbage). It’s hard to expect others to like being around you when you don’t even like being around you. While it’s not something I’d ever wish on another person, it sure makes me an A+ companion for people who are not exactly a pizza party to hang out with.

Divorcee? Addict in the middle of detox? Fellow mentally ill person? ALL THREE AT ONCE?! Hi, hello, I’m here for you. And I’m still totally going to throw you a pizza party..

If you like this article, please share it! Your clicks keep us alive!
Tags
mental illness
mental health
recovery
PTSD
OCD
anxiety
Depression