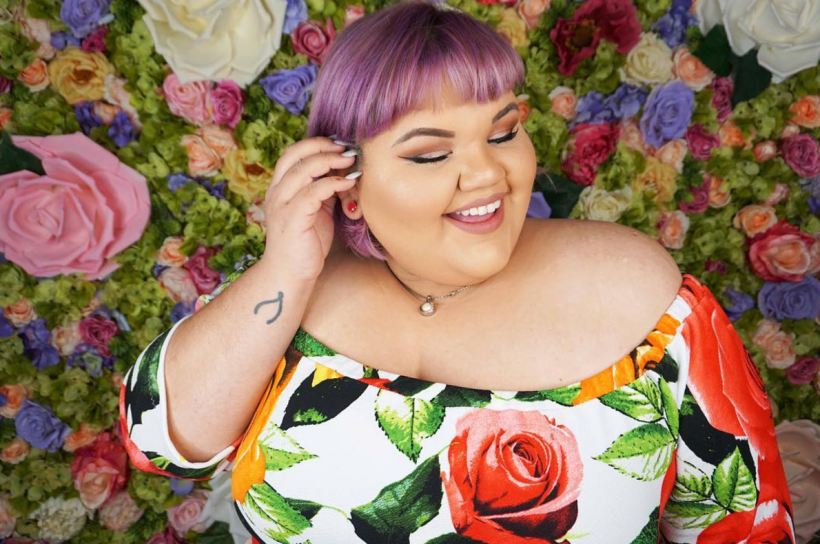 This very callout culture so enamored with gaslighting routinely and systematically gaslights anyone with so much as a single chubby toe out of line with their personal politics. (Image credit: Ashley_Nell_Tipton via Instagram)

Ashley Nell Tipton is in the news again. This time, instead of breaking the style status quo with gorgeous lavender hair and her vibrant JC Penney clothing line, she's losing weight.

Ashley is another public figure in a line of public figures who have undergone weight loss surgery. Gabourey. Rosie. I'm sure there are others but I'm not going to research it because it's irrelevant.

And in true militant activism form, the world is giving her shit about it.

Fat activism is one of the few branches of social justice in which fellow activists seem to feel entitled to comment, degrade, harass, and otherwise police the bodies of their peers.

Fat is complicated, no doubt. Fat is visible, conspicuous. Where fat historically was evidence of wealth, it's now most often associated with stupidity, sloth, disease. There are few other forms that the body may take to earn itself the designation of “disgusting.”

Is it so shocking that a fat person might not want to remain fat?

Compounding the negative association of fat as a general state of being, there's also the difficulty of finding clothing, the public spaces not designed for fat bodies, the discomfort of squeezing yourself into situations, both physical and emotional, that aren’t safe for you. Once you've navigated all of these obstacles, you've still got the health implications that not infrequently accompany the fat that our culture already loathes.

All of this being said, does Ashley’s gastric bypass reek of capitalism, of a misappropriation of choice feminism? Is it buying into “diet culture?”

Ashley has said she feels “trapped in her body.” Isn’t this a feeling many, if not most, of us can relate to? Living inside a body that doesn’t allow you to accomplish the things that are important to you, and to your life, that is not a life many folks would choose. I know this, I’ve lived this.

Ashley’s weight isn’t just problematic in terms of her lifestyle, her health is negatively impacted as well. In an interview with People Magazine, Ashley revealed two very distressing physical findings.

“I found out that my blood pressure wasn’t okay and that I had a fatty liver. All these health risks were coming up. I was like, no wonder I’m not happy, because my body is working 10 times harder to try to be healthy.”

And even further, she was hospitalized with an infection that had taken up residence in the folds of her skin. Intertrigo (the fancy medical word for this) can range from simple (but incredibly itchy) yeast to things more problematic, including bacterial and fungal infections. The panniculus (fancy name for the lower abdominal fold), damp and deprived of air circulation, is the ideal breeding ground for pretty much everything that’s not good.

All of this being said, does Ashley’s gastric bypass reek of capitalism, of a misappropriation of choice feminism? Is it buying into “diet culture?”

I recently lost a pretty significant amount of weight — at least a toddler’s worth. Even without the employ of surgical measure or dieting, I’ve been told there is no place for me in the community I once loved. I’ve been told I wasn’t fat “enough.” I’ve been told I have no place at the table. I’ve been accused of stepping on the shoulders of the oppressed to achieve success.

And to make matters infuriatingly worse, this very callout culture so enamored with gaslighting routinely and systematically gaslights anyone with so much as a single chubby toe out of line with their personal politics. If you see their community as harmful, it is not the community’s fault, but your own. There is no effort to assess or interrogate the harm stated. Instead, you are accused of being the one who is harmful by speaking out. I don't know about you, but that sounds like the literal definition of gaslighting to me.

I’ve done nothing but my very best. That’s all a human can really do, isn’t it?

The scope of criticism reaches much further with Ashley. How must it feel to have your very survival scrutinized?

I am fucking fed up with this kind of activism.

The hatred has worn me down and left me questioning what this community really wants to achieve. Are people defending the right to care for and love, or at least accept, their own bodies, or are they simply constructing a new Mean Girls club?

In circumstances where the most destructive kind of loathing prevails, all I can conceive is that folks with this fire of hatred burning inside them, are deeply pained or profoundly afraid. Hatred isn’t born, it’s made.

Hatred like this is the root of the pain so many feel.

There is suffering in humanity alone, it’s the common denominator that binds us all. It is enough.

Ashley is enough, regardless of her choices.