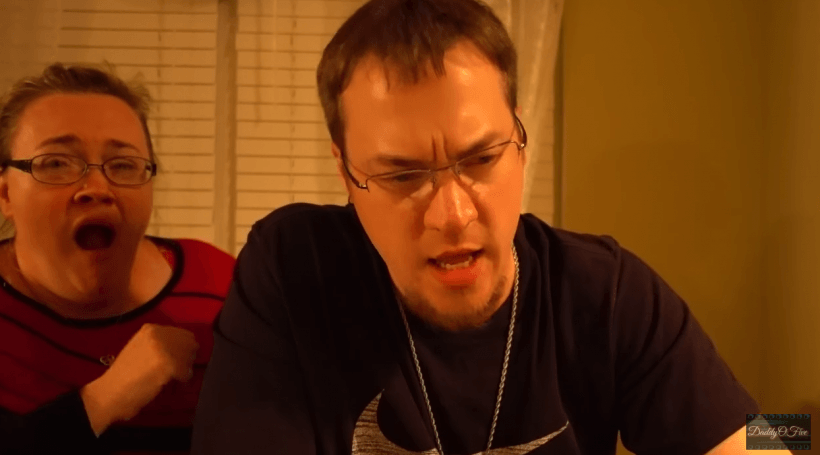 In today’s One More Way The Internet Is Screwed Up, YouTuber DaddyOFive thinks it’s hilarious to abuse his kids.

I cannot believe this is even a thing I have to write about.

IT IS NOT FUNNY TO ABUSE YOUR KIDS ON THE INTERNET.

Mike and Heather Martin, two not cool people who live in Maryland, like to play “pranks” on their kids.

Wherein “prank” = throwing a stack of Uno cards and invisible ink all over the floor and subsequently screaming “WHAT THE FUCK DID YOU DO?” and “WHAT THE HELL IS THAT?”

Also, wherein “prank” = letting your son actually slap his sister IN THE FACE, while yelling “YOU KNOW YOU DON’T HIT GIRLS BUT SHE’S YOUR SISTER SO THAT DOESN’T COUNT!”

Phil DeFranco picked up on this bullshit pretty quick and, in typical Phil fashion, let these two have it.

Phil has approximately one zillion YouTube followers (it’s actually 5,293,301, but dang that is a lot), of which 2.7 million have watched this video, so, as you can imagine, it spread like wildfire. Also as you can imagine, when 2.7 million people watch parents being unbelievably awful to their kids, said people get kind of angry.

Mike and his wife posted a response video, in which they claim their family has been “destroyed over false accusations.” And now because of Phil’s video the Martin family is in “REAL danger” over “FAKE VIDEOS.” He further claims that the kids are "in on" the videos and that many of them are scripted. NOPE.

Mike further claims that this YouTube channel is “for them.” ("Them" being the children.) Mike wants everyone to "feel comfortable" and know “these kids are safe.” He also wants you to know they will continue to make videos but "change their style."

Well, there's nowhere to go but up from here, Mike.

Mike and Heather have since deleted the videos.

Since this horrible situation broke Monday, the children’s biological mother has been interviewed. Yes, Heather Martin is not the biological mother of these children, but claims the kids are "better off" with her. “Better off” I guess now means that being screamed at is somehow a more safe and secure home environment than anything else, which is a pretty steep claim.

I’m just going to go out on a limb here and say that Mike and Heather are less worried about their kids and more interested in how much money they might make on YouTube.

It is not funny to scream and curse at your children, whether they are “in on it” or not, it will never be funny.

This is what’s wrong with America.

If you like this article, please share it! Your clicks keep us alive!
Tags
DaddyOFive
abuse
allegations
video
Children
Kids
parenting
pranks