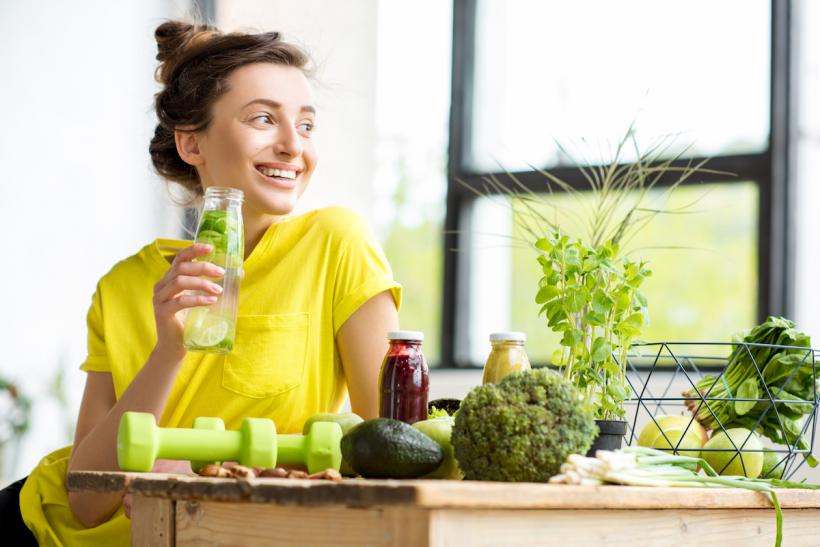 GIRL, PUT YOUR SPINACH IN THE FRIDGE AND THROW OUT THOSE SUSPICIOUSLY OPAQUE BEVERAGES.

January has come and gone, and with it leaves a maelstrom of diet talk and targeted advertising from your nearest gym franchise. Scraps of the New Year weight loss linger in guilt-tripping gym newsletters and the few remaining participants in the communal 60 Day Cleanse(s). For the most part, though, the word “resolution” has all but disappeared from the internet. Those goals we were so enthusiastically reaching for back in the single digit days of January feel years away.

There are two main scenarios that play out here:

Both of these experiences are often chalked up to laziness. People are flawed and fickle, but I think there’s more to our collective experience with resolution making and breaking, especially when it comes to bodies and dieting.

It’s like the teacher who finds fault with the students when the whole class fails their test, as if the fault can’t possibly be with the test or system being used.

A4: I've never had a resolution that made a lasting impact. Never. Only had guilt and feelings of failure. So destructive. That's why I don't make resolutions anymore lol. #RavChat

Making the yearly tradition of failing at our January resolutions out to be the fault of the consumer is a pretty fail-safe way to ensure no one thinks to wonder if the problem just might be the products they return to year in and year out.

Let’s dissect the general narrative we spin about the resolutions we’re supposed to be making and the shame we are supposed to feel when we don’t keep them.

Laziness, Inconsistency, And Lack Of Willpower

Laziness is one of my least favorite descriptors in the English language. Most of the time, using it is an ironically lazy reading of the complex contexts that surround human beings, the energy they have, and the decisions they make. It's nothing but a bunch of assumptions. The sting of a (usually self-inflicted) insult like “lazy” is that it carries a heavy bit of cultural baggage wherever it goes. The rest of the noise is just reiterating what lazy already implies.

If we’re “lazy” for not keeping our resolutions, we are also inconsistent and lacking in will power. We’re glutinous and indulgent and unable to maintain control of ourselves.

Basically, if we’re lazy, we are fat. Or at the very least in danger of becoming fat, that distinctly feminized fear that so many diet companies make a fortune out of exploiting.

A6: We're up against a billion-dollar WL industry that DOES NOT WORK! Yet, I do see a shift and it's beautiful to watch. Set resolutions that speak to you and make you feel good - and it doesn't have to be about health. Let's try kindness to others AND ourselves. #RavChat

The truth is, a lot of us fail to keep our resolutions because they simply aren’t the ones we truly want to be making.

They’re the ones we think we’re supposed to be making, which these days can be a bit tricky to discern from our own desires.

The two most common New Year’s resolutions are about food and exercise, often with the ultimate goal being to lose weight. Many people sign up for diets like Weight Watchers or pyramid schemes selling tummy tea. “Cleanses” are very popular, because apparently no one has a functioning liver. There are a lot of socially sanctioned, publicly celebrated ways to embark on the timeless quest of making your body smaller and taking up less space. The most common thread is that they all cost money.

They all want you to buy something. They want you to do the thing they expect you to hate yourself for doing: consume.

I don’t know if you’ve noticed, but “health” sure is expensive these days. Raw non-GMO no-dairy vegan agave vapors don’t come cheap. Gyms cost money, and those fancy fitness classes aren’t included in the standard membership fee. And hey, while you might not be able to shell out the money for a routine check-up from a qualified medical professional, Sharon from Health Science class 12 years ago has some upholstered saran wrap you can buy to suction around your stomach and solve your health with lost water weight through excessive abdominal sweat.

When we give our time to the ideals we’re taught to desire instead of the personal truths we hope to embody, we’ve failed before we’ve even started.

None of it sounds particularly like the sort of venture you’d like to keep up for 12 months. Some of these “healthy lifestyle choices” are actually unsafe to practice for an entire calendar year. A year-long juice cleanse would kill you no matter how many antioxidants flow through your heart chakra.

Your heart chakra doesn’t even want you to do that.

Your body doesn’t want you to shrink it just for the sake of being smaller.

Your gut doesn’t need you to flush out any toxins; it just wants some fucking yogurt.

Almost three quarters of America made resolutions this January, and most of those resolutions centered around diet and exercise. Being mindful of what you eat and moving your body aren’t bad things! They’re great things, even! But we make the same resolutions every year, and we still eat the same “cheat meals” and skip the same early morning gym sessions. Because health isn’t the thing we’re aiming for — thinness is.

A5: My most revolutionary resolution this year is compassion for myself. I tend to overwork, aim for perfection, and beat myself up when I am human. This year, I want to be compassionate towards myself and make self-care a priority. #RavChat

Resolutions should be a time for renewal and reflection, not guilt and obligation. When we look at the year ahead of us, our focus should not be on how to best make our lives fit normative standards of success. Our focus is much better served when we turn it instead to our individual wants and needs. Sometimes, that includes changing how we move or feed our bodies. But using a formula won’t solve that, and weight loss isn’t even sort of the best metric to measure it by.

When we give our time to the ideals we’re taught to desire instead of the personal truths we hope to embody, we’ve failed before we’ve even started.

And if we only reflect on our behavior and talk about ways to be better one month out of each year, then what the hell are we doing the other 11?

Make your resolutions things that won’t just make your life look better — they’ll make your life better, period. Ask yourself how you want to reach those resolutions. Ask yourself what misleading messages people or entities might use to distract you from going for what you want, when you want, how you want. And then listen to yourself. Take your own advice. Aim for the goals that make you feel most yourself, and get rid of the things that don’t.

The tweets used in this essay were part of Ravishly's #ResolutionRevolution chat on Twitter. To find more of the conversation, click here. Join us next time @ravishlydotcom using the hashtag #RavChat.