I Love Solitude, But I'm Terrified Of Being Alone 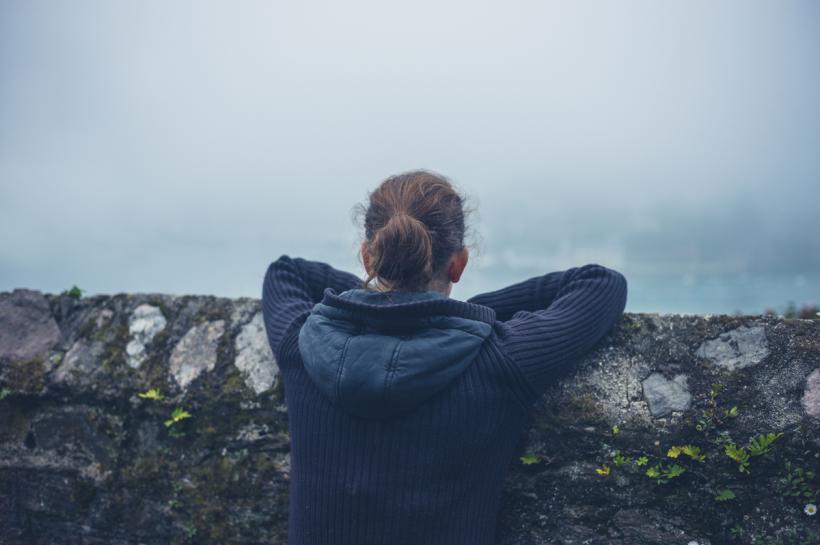 I had spent so much time yearning for solitude that I had never really confronted the reality of being alone.

I have sought out solitude my entire life — up until pretty recently, it was a hard thing to come by.

I am the oldest of four siblings within an even larger, close-knit extended family. I did not spend much of my early years alone. And oh, how I wanted to! I had elaborate dreams of tree houses and woodland forts, where I could escape from the cramped quarters and chaotic dinner tables and loud, messy family gatherings. I would sneak books into the bathroom and prop myself up on the toilet seat, legs balanced on the edge of the tub, reading until someone banged on the door screaming about how badly they needed to poop.

And then, when I was around 8 or 9, my mom gave me my own room. She moved my baby sister from the nursery and into the room I’d been sharing with my other sister. She drug out a little trundle bed that smelled like moth wings, bought a tartan comforter (a “Harry Potter blanket,” per request), set up a rickety bookshelf, and found an old CD player no one had been using. She bought me two Avril Lavigne CDs and attached them to a card welcoming me to a new stage of Growing Up. She even sprayed it with her Chanel perfume.

It was all very cosmopolitan, and I felt like a bright-eyed ingenue freshly arrived to New York City, if New York City were a small room at the back of a ranch house where fourth graders lip synched to Hillary Duff and daydreamed about being Wolverine’s long-lost daughter.

I think I lasted about half a night.

I had spent so much time yearning for solitude that I had never really confronted the reality of being alone. The attempt at a room of my own proved unsuccessful, as did many subsequent attempts in years to come. I would last a handful of months on my own, only to inevitably beg a sister to move into my room so that I could sleep through the night. Whenever I found myself with the ample solitude I had spent so many childhood hours yearning for, I fell into a dark pit of worries and neurosis that felt impossible to crawl out of. I was terrified of being the last person awake each night, truly alone in a house full of people.

And yet, it was all I ever wanted. I felt an intense need to spend time with just myself, and an equally intense fear of being left alone with my own mind. I had come to believe it was a dangerous place to be. I still often feel that way.

"I think that part of my lifelong obsession with solitude is largely a desire to feel a sense of peace when it comes to the business of inhabiting myself completely."

I can’t pinpoint the exact moment I realized how treacherous the twists and turns of my mind could be, but it had to be very very early. I was a smart kid with a lot of nervous ticks, so the inclination to turn inward has always been there. But I eventually learned that it was possible to go too inward, to enter a part of my mind that felt just about impossible to escape.

I would entertain a small worry with every intention to move onto the next thought that captured my attention, but I would get stuck on the worry, burrowing deeper and deeper inside of it.

The worry would spiral into obsession, then panic, then phobia and compulsion.

I tried to externalize these fears through ritual and routine, but the more I thought about them, the more complex the rituals became. So intense was my fear of bedtime and sleeping alone that I had to spend an hour before bed “checking.” I had to check every corner of whatever room I was sleeping in, literally. Every single ninety degree angle that I could find in a room had to be checked and re-checked, all in a specific order. I had to check the inside and outside of every drawer, the points made by each piece of furniture. Only after I was sure that my room was free of serial killers or hidden cameras or, worst of all, secret bombs waiting to be tripped by the opening and closing of any door or drawer (fuck you, The Pelican Brief).

If the outside was safe, then my inside had permission to relax — at least for a few hours, which was how long it took me to fall asleep each night.

I no longer have to check every corner of a room before I can sleep in it, but I do find it hard to spend time alone doing anything other than worry and obsess. When I moved out of my family’s house two years ago, I spent the first two weeks of my newfound freedom sobbing inconsolably. Despite all my fears of being left alone with my mind, I still craved the chance to carve out my own space and live life on my own terms. I needed that independence like air, but I found my new apartment asphyxiating. I was terrified that if I had no one there to ground me in reality, I would go insane. Which, of course, pretty much drove me insane.

I spent weeks at a time camping out on my parents’ couch, falling asleep to the lullaby of the TV, not trusting my brain with silence even in sleep. I wish I could say that I no longer retreat to the family couch on occasion, but I do. A panic attack by myself is worse than five panic attacks in the company of someone I know and trust, even though in both cases I have to be left alone in order to calm down.

Several times, I’ve found myself outside my apartment with a bag of clothes and a cat carrier, not quite sure of when or how I got there, but fully intent on running far away from my home and my self.

I sometimes struggle to even call it that: my home. It implies that I actually have to live there, rather than just exist.

I am slowly learning to live on my own, but the process is painful. It requires me to learn how to trust my brain again — something I haven’t done in so long that it feels like I’m learning to do it for the very first time. Maybe I am.

I have spent so many years avoiding both my mind and my body. When I am alone, I have no choice but to confront both of those things. I think that part of my lifelong obsession with solitude is largely a desire to feel a sense of peace when it comes to the business of inhabiting myself completely. I want to get to know me — the actual me, not the me who busies herself with tasks and rituals and worries in an attempt at avoiding the more destructive aspects of mental illness.

I think that underneath the layers of self-imposed rules and strict mental and emotional barriers, there is a part of me that aches to be known — a part that I ache to know. Something so bright and vital that it has been calling out to me since the very beginning of life. I catch glimmers of it now — especially when I am alone. I hope that with time and solitude, I can uncover even more of it. To deny myself a mind of my own is far lonelier than any night spent being the last person awake.