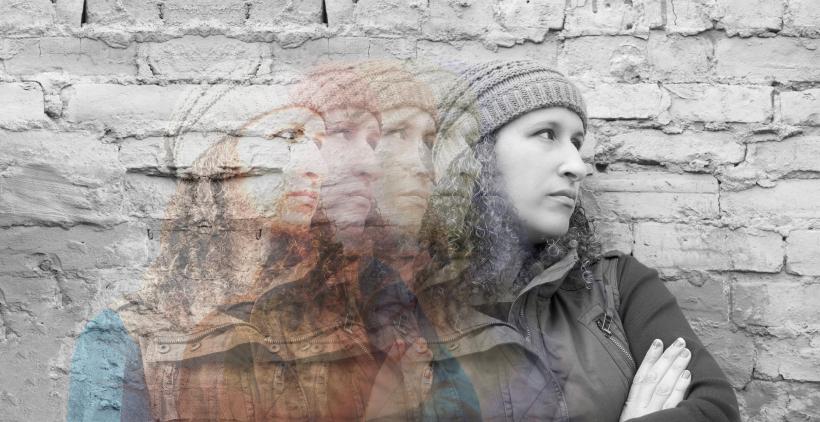 Mentally ill people are not separate from us — they are part of us.

In the wake of yet another act of  domestic terrorism, Donald Trump — who is so diabolically incompetent that I have to continually remind myself that he is, in fact, the president of the United States — excused a Texas church massacre as “a mental health problem.” The shooter, he said, was “a very deranged individual.” And that was that.

I am not quoting this out of context. That was the sum total of his comments on the matter — a marked difference from his reaction to an earlier act of terrorism committed by a brown Muslim man, wherein he called for immediate legislative action. But that’s what mental illness is: the ultimate conversation killer.

Nothing makes people uncomfortable like the idea that the human brain is as vulnerable and fallible an organ as any other.

That’s why we like to make it sound like an anomaly — one that makes you immediately, inherently bad. We are very attached to the idea that to have a flawed brain is to have a flawed character, mostly because it takes the work out of examining and interrogating our bad behavior. People who do bad things do them because they are crazy, not because they are people. The adversary is not our own flawed hierarchies and norms, but rather an individual outsider whose crimes are of an external origin.

According to Trump (and even a good many wading pool-grade leftists with far too much faith in the system), the Texas shooting didn’t happen because it is ridiculously easy to obtain an unconscionable range of lethal weaponry both legally and illegally in this country. It’s not because we’ve fostered a culture where there are men who feel powerful and entitled enough to exact violent revenge on women who have “wronged them.” No, the dude was just crazy. Nothing to see here! Just another “deranged individual” who couldn’t possibly have been acting with a shred of his reality intact. We don’t share our reality with people like that, and theirs has nothing to do with ours, so the only problem, really, is that those kinds of people exist in the first place.

We do ourselves no favors with the ironically delusional idea that there is villainy lurking in a brain merely because it is a brain that is sick.

We’ve been vilifying mental illness for as long as we’ve been telling stories with villains in them. Where do all the villains in Batman go? An asylum. The Joker was insane, and poor Two Face was smart and sensible Harvey Dent before trauma and disfigurement rendered him alien and deranged.

The true villains of Harry Potter — the ones Sirius Black was only able to elude because of his lion-hearted innocence and willpower — are dementors, physical embodiments of depression. We see their handiwork in Voldemort’s own leading lady, Bellatrix. Voldemort himself was a bad apple from the start — the sociopathic product of a love potion, never mind that more complicated bit about his being aided and abetted by the wizarding media and government.

Frankenstein was a mad scientist, and let us not forget all those satisfyingly pathological killers we are so fond of tracking down on TV crime dramas. Mentally ill villains are all around us, and we’re terrified of them and their insanity. It’s no wonder that the definitive Hollywood horror film is called Psycho.

I find all of this frustrating because while it’s certainly true that there are mentally ill people who do bad things, the reality is that we are also the heroes, the bystanders, the victims — the human beings who make up every part of every story. One in every 25 adults lives with a serious mental illness (I am one of those adults!), and one in five experience some form of anxiety or depression in any given year. Only 3-5% of violent acts can be attributed to this huge portion of the American population, yet they are 10 times more likely than their neurotypical counterparts to be a victim of violence. Anyone with a modicum of sanity could tell you that the stereotype simply doesn’t add up.

The issue here has far less to do with mental illness than it has to do with the very human proclivity for violence, hate, and destruction.

Things so complicated we’ve been trying to solve them for literally thousands of years, in large part because we are so terrible at taking responsibility for them.

Mentally ill people are certainly capable of such things, seeing as we are just as human as anyone else. We are also capable of the equally human virtues of compassion, empathy, and creation — often in ways that are informed by our experiences living with and being marginalized because of mental illness. We do ourselves no favors with the ironically delusional idea that there is villainy lurking in a brain merely because it is a brain that is sick.

And if we dig a little deeper than the crazed antagonists of popular culture, we can find mental illness woven between the lines of our heroes and saviors and all the normal people that fill up the gaps — no matter how convinced we may be that mental illness is monstrously abnormal. We don’t talk about how Harry Potter’s PTSD made him a resilient and passionate agent for change. We forget Batman’s phobic origins and his many parallels to the Joker. Hannibal Lecter is what a certain beloved band might call a “psycho killer,” but Clarice and Will both serve as protagonists with far-from-typical neurologies in their respective story lines.

We struggle to see the diverse and deeply relatable experiences of mentally ill people already imprinted onto our stories because we only ever look for them when we’re trying to find someone to blame.

Mentally ill people are not separate from us — they are part of us. One in 25 people is eight people in every full movie theater; three in every church congregation; two in the average college classroom. Rarely are we the armed and murderous man who walks in and massacres all of those people. We are far more likely to kill ourselves than we are to kill another person. If there’s any mental health problem in this country, it’s a severe lack of accessible and affordable mental healthcare, which, last I checked, is something Trump’s administration is actively seeking to make yet more inaccessible.

Mentally ill people aren’t the problem — the people in power are, from Trump to the NRA to the “lone wolf” terrorists our sensationalist media encourages and excuses. They're just pointing at us so that people will stop looking at them.

OCDame is a column about chronic mental illness by Jenni Berrett. While she’s no doctor or counselor by any means, she does have extensive experience in being batshit crazy — which she doesn't think is as bad a thing as the world would lead you to believe. Each week she puts that ongoing experience to good use by writing things that have been stuck inside her heart for too long in the hopes that they will help unstick somebody else’s heart, too.

If you like this article, please share it! Your clicks keep us alive!
Tags
mental illness
mental health
psychopath
scapegoat
mass shootings
violence