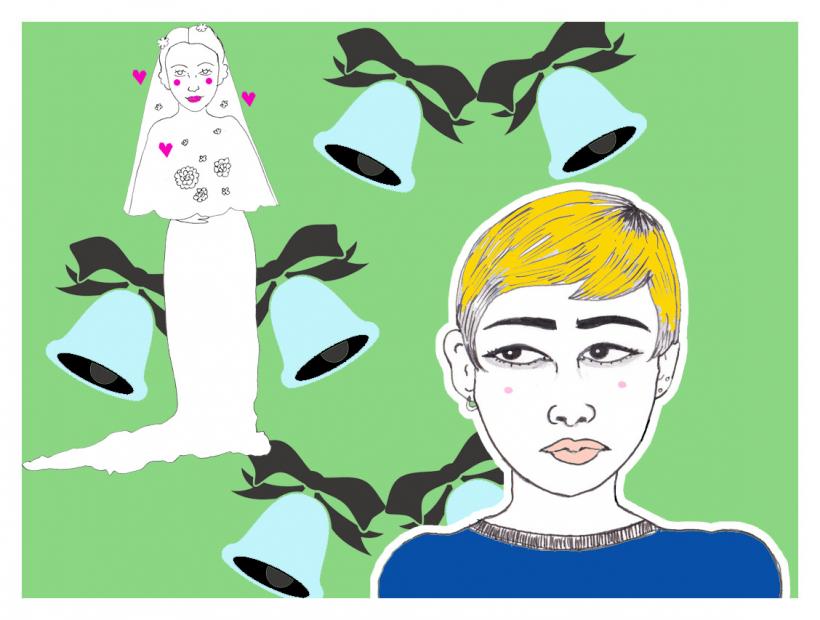 My question may be one that you get a lot from people: my best friend is making a huge mistake, and obviously, I know I can't interfere, but supporting her also feels wrong.

We've been friends since childhood, for about 20 years now, and we've been there for each other through horrible struggles with low self-esteem which we both dealt with over the years. I've been a train wreck myself in the past, but fortunately, I think I've got things sorted out now and have a normal set of values and sense of self-worth. She, however, is in her first relationship for the fourth year now; up until she was 29 all she'd ever experienced was the bitterness of unrequited love and the occasional one-night stand (not the good kind. The semi-rapey, humiliating kind).

I think it's great that she's gotten to experience a monogamous, serious relationship with a guy who has often treated her nicely — but I strongly believe he's not the guy for her.

They moved in together pretty much right from the start — the reason being that he got evicted from his apartment (red flag!). They rented a flat together, the expenses of which she has paid almost entirely, working 12 hour days for about three years, while he was jobless and constantly letting her believe he was on the brink of launching a new enterprise (I really think he believed it too).

He now has had a job for about two months, but it seems to me from the evenings I've spent at their place since then that he has absolutely no idea how to deal with stress, and when he gets home, he's so mean to my friend. On the flip side, though, she's super-clingy with him, and I get that he feels suffocated.

What breaks my heart is that my friend had this idea recently that she wants to get married to this guy.

He didn't propose or anything; she just decided to discuss it with him, and he seemed reluctant to say no. She even told me, very unemotionally, that she only wants to marry him "because I'm at an age where I should be thinking about kids, and I can't think of a valid reason not to marry him.”

It also breaks my heart that the guy is doing the postponing game that he always does: "why don't we wait till the spring…," never wanting to tie himself down to anything specific, but also too weak to flat-out say no.

I find it more and more difficult to spend any time at all with my friend, even though I love her dearly. She's always spewing negativity, and I feel like she's setting herself up for either a lifetime of chaotic suffering or a huge disappointment (and for her sake, I hope it's the latter). I really feel like I can't smile and nod at her wedding plans anymore, but I'm also afraid of making her angry and her cutting me out of her life.

You Might Also Like: Ask Erin: Help! I Hooked Up With My Best Friend, And It’s Not Working Out

It is understandable why you are so concerned about your friend.

Getting married to someone is a big decision, and it sounds like your friend feels like that it’s what she is supposed to do, rather than following her heart’s desire.

So what can you do?

Mainly… listen. You certainly can express your concerns, but ultimately you are not going to be the one to change her mind about this. As you know from getting out of your own unhealthy relationship, it takes what it takes to arrive there. Talk to her from your perspective, using your personal experience with untangling from a toxic situation, to shed some light on what it is you see that she may be unable or unwilling to see right now.

The good news is that he is playing the postponing game. Let’s hope he keeps postponing away. If nothing else, at least he’s not eager to get to the proverbial altar.

Now, there is something else you can (and should) do for your own peace of mind.

Set boundaries with your friend around the wedding talk and negativity.

Might she react poorly? Yes. But, if you speak to her from the heart, coming from a place of compassion, she is more likely to hear you. It’s the only thing you can do because pretending to be there for her and listen while secretly resenting her is not good for anyone.

Lastly, it is absolutely possible to support a loved one and not support a decision or behavior. And, you can even tell her that.

My gut says that your friendship will outlast her crappy relationship.

The information within Ask Erin should in no way be interpreted as medical advice because I'm not a medical professional. But I am here to help — to share with you the wisdom I've gained after years of making mistakes. If you have a question for me about relationships, addiction, dating, friendship, depression, sex, consent, what I’m reading, what I’m watching, Pyrite, or anything at all, use the contact form below or email me at askerin@ravishly.com. As always, your anonymity is golden. Lastly, I’m so excited to share my Ask Erin Self-Care Guide, free when you sign up for my weekly newsletter. xoxo

If you like this article, please share it! Your clicks keep us alive!
Tags
Friendship
advice
Ask Erin
boundaries
getting married
toxic relationships