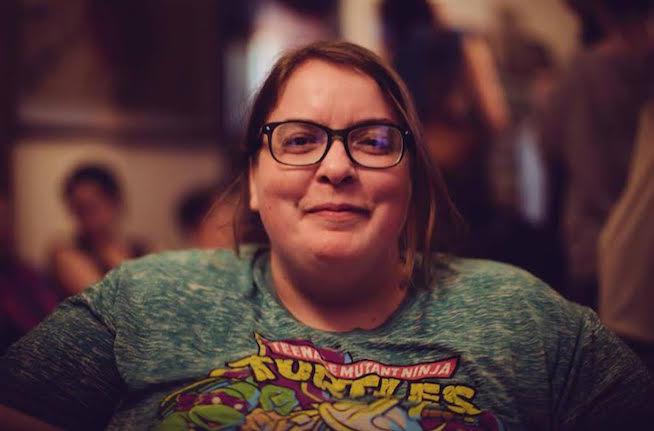 You may not know it, but you already know who Rebecca Shaw is. As the woman behind Woman Against Feminism, Rebecca runs one of the most beloved Twitter personas on the Internet. With her signature idiosyncratic spelling and charming tongue-in-cheek "anti-feminist" commentary, Rebecca pokes the flawed logic thrown against feminism in all the right ways. She was gracious enough to answer a few questions about comedy, grammar, and speaking at the Sydney Opera House (!).

You do about a million different things, but you are perhaps best known for your parody persona on Twitter, Woman Against Feminism. What made you start the account, and did you ever expect it to develop such a cult following?

The Twitter account was essentially just a direct reaction to the Women Against Feminism movement that got some coverage last year. There was a lot of discussion around it that was quite serious, and my natural instinct is to try and use humor to get a point across instead. I also think there is only so far the conversation can go when you have two groups so sure that they are correct, and that can become frustrating, so it was a way to let off some steam. Also I just like making dumb jokes on Twitter.

I honestly thought I would just send out a few tweets from the account, they would get no traction, and then I would give up immediately like I do with everything else that I’m not good at straight away. But for some reason it just hit and took off, and it’s been really amazing to see the reaction.

Your comedy, both as Woman Against Feminism, and in some of your blog posts (the one about the feminist toe ring comes to mind), employs a uniquely butchered sense of grammar and syntax. It’s done so well — how did you develop that wordplay?

When I started the Twitter account I knew that I wanted something to make it identifiable and to have a running thread, so I decided to spell ‘feminism’ wrong in every tweet, and keep everything else spelled correctly. The grammar and syntax kind of just developed after I decided to start each tweet the same way, and I thought it was funny so I kept doing it. Most feminists I know are hilarious but have to deal with so many serious issues all of the time, and I think getting these small chances to engage with something that is silly and absurd is really enjoyable for a lot of them.

You’ve been on a panel about satire (in the Sydney Opera House!!!). What were some of the points shared at the panel you’d like to share with others?

I know, the Opera House! They’ll let anyone in these days. I really enjoyed the diversity of satire that was on display in that panel — there was political satire of varying types using platforms, there was social satire done via a YouTube series satirizing cooking shows, and then there was me with a Twitter account. I think it really showed that the Internet gives a lot more scope for a lot of different kinds of voices in satire or comedy to be heard over more traditional outlets like television. Basically anything that helps elevate the voices of people alongside (or above) voices of straight white dudes is a beautiful thing.

How do you think satire and comedy can work as political activism?

I think they are particularly effective ways to draw an audience in, which then gives you the opportunity to share your ideas and hopefully bring about some sort of change, even if it’s just altering someone’s perspective on an issue or starting a conversation.

Are there people who have assumed Woman Against Feminism was not a parody account? Like a people-taking-an-Onion-article-as-actual-news kind of thing?

Oh yeah, heaps. Every day. I can write a tweet saying something like "I’m sad my husband turned out to be four squirrels" and I will get a very earnest "WHY DO YOU HATE WOMEN’S RIGHTS!" reply. But I can’t be mad at those people, because they love feminism and are going out of their way to defend it. They are just accidentally defending it to a parody feminist account run by a feminist.

Everyone with an online following, especially the lady kind, attracts an accompanying following of trolls. Woman Against Feminism really seems like the kind of online presence that would garner a LEGION of trolls and general dissenters. How do you navigate “not feeding the trolls” while also encouraging a dialogue and keeping people responsible for their words?

I have a lot of feminist friends who are in the public eye, and I have seen the kind of feedback they get. When I started the account I decided that I would never respond to any tweets, whether positive or negative. I don’t think a parody Twitter account is the place for nuanced discussion, and I really couldn’t be bothered wasting my time on obvious trolls. But I do respond to people with genuine concerns or ideas in private messages, because I want to be as thoughtful and considered as possible, and that does include engaging with criticism.

Tell us a little bit about your podcast, Bring A Plate! In the past, you've covered a vagina weight lifter, amongst commentary on Australian politics and Britney Spears' cinematic masterpiece, Crossroads.

As you can tell, it is a very subtle and serious podcast. It came about when I met my (now) good friend Peter Taggart through Twitter, and we discovered we share very similar senses of humor and taste in pop culture. We both also love comedy podcasts, but at the time the majority were still just a bunch of straight dudes being funny. We thought that it was time for a gay man + lesbian + Australian + '90s pop culture podcast to be brought into the world, and it’s silly and heaps of fun.

OK, so you podcast. You’ve written for the Guardian. You run a really successful parody account. AND THEN you have some beautiful photography. What do you love about photography? Is it sort of like a break from your other professional ventures?

That’s so nice, thank you! I just really love looking at something and trying to find a unique way to capture it, especially while traveling when I know I might not get back to that place. But mostly for now it is just an unpaid hobby I enjoy doing on top of all my other ventures that also earn me no money.

This interview series is all about celebrating the people whose work we admire and love. Who are some people you are loving right now?

I am really loving this period in time when more and more women are taking the opportunity to approach comedy with a feminist bent. I have been obsessed with The Toast for a while now, and in particular Mallory Ortberg’s writing and Twitter account. I think she is hilarious and if she is reading this she should consider being my friend. I also have been enjoying Reductress, which is a fake women’s news magazine that has articles like “Sure, I’m a Feminist, But If I Support Other Women, How Will I Become the Highlander?” I also always love everything that Roxane Gay touches, I think her humor is subtle and brilliant. In general I just love all kinds of funny women forever and ever, amen.