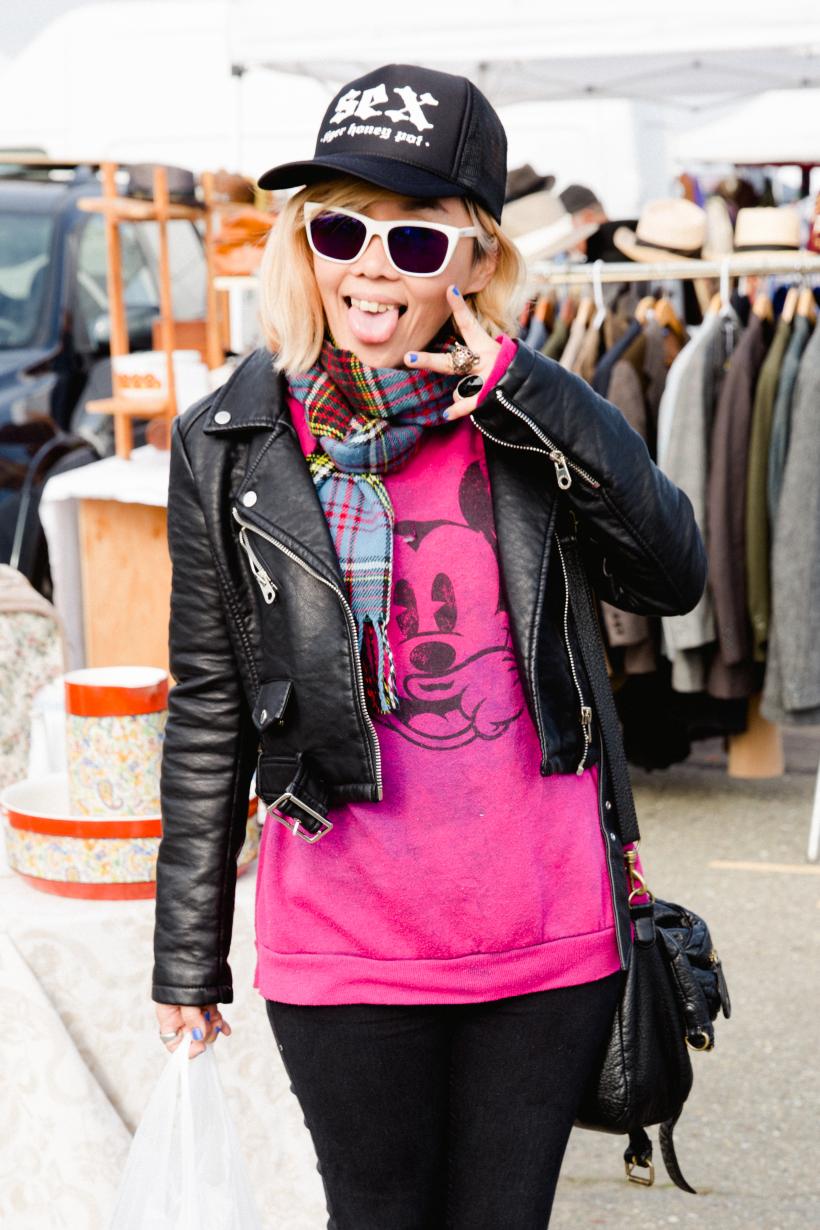 What do you usually look for when you're out here?

Basically everything—sometimes even furniture and stuff.

Did you find anything good lately?

Today actually they had this—[pulls a Def Leppard t-shirt out of bag]. It's a rock t-shirt. Usually rock t-shirts are really expensive, but this one is just $20!

I know! The other things I got are these really cute bowls. I got four of them, and then they gave me a discount—all four for $15.

Are you local or visiting?

I live in San Francisco.

Housewife basically, but I do comedy in Japan.

How did you get started with that?

I was in Japan, and then I moved to the United States a long time ago. When I was in Japan, I had an agency and stuff. I still have an agency, so I go back there and sometimes do comedy over there.

Have you done comedy here as well?

Well, I'm in a band here—or used to be. We don't do that too much anymore.

What do you do with the band?

I'm the singer. Basically my job is screaming.

What was the name of your band?

Ass Baboons of Venus. We started in New York, and then we moved to San Francisco. We used to go on tour a lot, but we don't do that anymore.

Is it more of a noise band? Any similarity to like, Melt Banana?

Yeah, pretty much noisy stuff like that! We played with them before.

So back to your comedy—are there any particular sensibilities to doing comedy in Japan?

How is it different?

Well, Japanese sense of humor is very twisted—like torture and body kinds of things. Here it's healthier! When I go there I'm teasing other people or stuff like that. I mean, American people do that too, but in a different way.

How often do you do comedy in Japan?

I go back to Japan once a year. And besides that, I have kids. I'm really busy with being a mom here too.

Have you had any difficulties juggling your careers with being a mom?

No, not really. I've been doing it a long time.

I just wear whatever. I don't think I'm "cool" today, but today I'm wearing this hat. My friend made it and I like it. He's in a band called Tiger Honey Pot.

Where are your favorite places to visit in the Bay Area?

So tell me about what you're wearing today!

This sweatshirt I actually got here! I love the tie-dye, Micky Mouse, and the mustache. The jacket, I forgot where I got it.

I also noticed some eyeballs peeking out of your socks!

I'll show you—they're Bambi socks. And the jeans are Forever 21. I cut the knees. The rings are mostly vintage, one is from Forever 21.