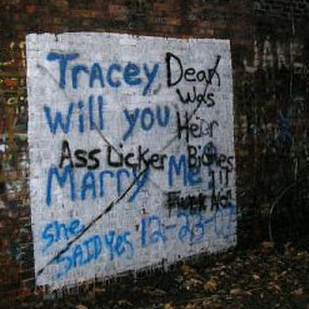 Geez, we looooove our social media. Some of us even love it more than the people on it. You know, their friends – and fiancés.

You’ve probably seen a trazillion “BEST PROPOSAL EVER!!!” videos on le internet by now. So we’re just gonna go ahead and say it: STOP.

How the hell is anyone supposed to live up to the dude who proposed via Angry Birds? You can't!

The proposal should be about the love and the excitement of spending forever (gulp!) together, but people have become entirely too focused on theatrics.

Louise Hung of xojane questioned this bizarre phenomenon after receiving numerous “mehs” regarding her sweet, yet understated, proposal story:

If so many women are supposedly displeased with the way they are proposed to, why don't they set it up the way they want it and do the proposing themselves? If we are enlightened, smart, equality-minded women, why are we falling back into the crusty old traditions of expecting our man to control the trajectory of our relationship?

Yeah, why be disappointed?! A study showed that 1 in 5 women "were so disappointed by the proposal that they wanted to cry" because it wasn't orchestrated in an exciting way.

Seriously? There are a slew of vibrator-wielding ladies out there who would love to switch spots with ya. The answer lies in the narcissism encouraged by social media. In the days of Madonna and acid washed jeans (i.e. the glorious ‘80s), psychologists Paula Nurius and Hazel Markus developed a theory that perfectly explains this:

Each individual is comprised of the “now self” and the “possible self,” which – besides being less complex than id, ego, and superego – is visible in social media. Your “possible self” wakes up at the crack of dawn for a yoga session before sipping on fine foam art coffee – all while rocking uhhh-mazing wingtip eyeliner. On the flip side, your “now self” probably overslept, wore pizza-stained leggings and violently cursed out the car that cut you off during your commute.

The point is, you can't sit around and wait for someone to read your freakin' mind. Actualize the love – and the helicopter, rose-strewn proposal – that you want, need and pine for. Strive for your best “possible self” but don't bully the "now self" either – she's tryin' b*tch!

A reconciled version of "possible" and "now" is the woman who's gonna attract a mate who wants to stop traffic just to broadcast their love.

Trust us, you don’t need the world to “like” your engagement. Most of 'em don't have any taste anyhow.

If you like this article, please share it! Your clicks keep us alive!
Tags
engaged
Relationships
Love
marriage
proposal
narcissism
social media