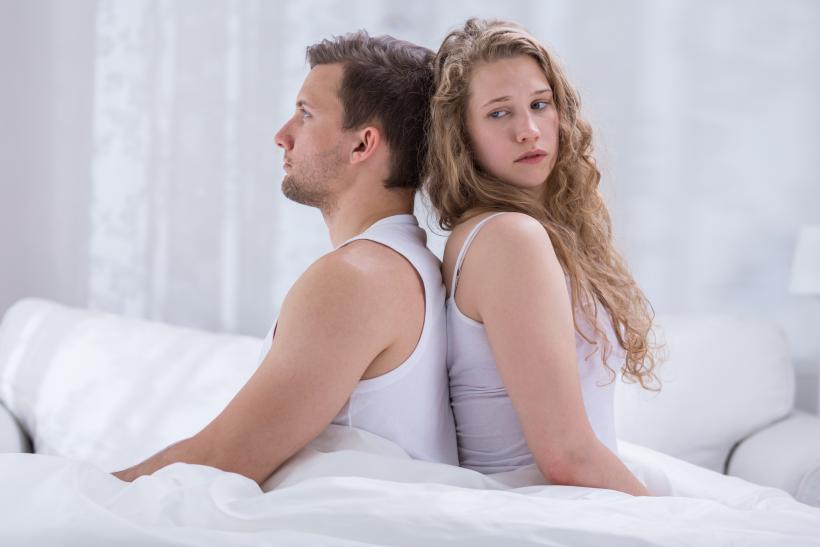 Why aren’t the feelings of the woman valid? Shouldn’t she be listening to her body? Her mind? Image: Thinkstock

Men are led to believe, often since they are young boys, that women should have sex with them when they want it.

You’ve no doubt heard this complaint from one of your married friends:

We’re not having as much sex anymore.

It’s a complaint that plays right into the stereotype that once couples get married they have less sex. And there’s probably some truth to it because, as we all know, our lust and bong-hit-high-in-love feelings inevitably wear off a bit as the relationship wears on. I’d say that’s pretty normal throughout the course of a romantic relationship.

Low libido is a very common issue for new mothers as they are healing from childbirth, grappling with fluctuating hormones and extreme sleep deprivation.

While we know adjusting to a new baby can profoundly impact a couple’s life (including sexual intimacy), we, as a society, act like it shouldn’t. We act like there’s something wrong with a new mother needing a time out from sex.

New mothers who admit to having less sex drive are often met with people urging, “Just do it anyway,” and, “You’ll get in the mood.”

But, what if you don’t get in the mood, even when you take this advice? What then?

Why aren’t the feelings of the woman valid? Shouldn’t she be listening to her body? Her mind?

I’m not sure where we got this idea that a husband owns his wife’s vagina. Or that he is entitled to intercourse, oral sex, fondling, or groping. I’m pretty sure I didn’t see that covenant in the paperwork. But, I have an inkling that this entitlement is very much based in misogyny and male privilege.

Men are led to believe, often since they are young boys, that women should have sex with them when they want it. Even when their wives are not “in the mood.” Because sex is the way he feels intimate. Sex is the way he connects. Because putting your husband’s sexual desires first is supposedly the best way to avoid divorce.

These antiquated and sexist designs for marriage are damaging to women.

When a married mom doesn’t put out, she’s called “cold” and “selfish” and the dreaded “bitch.” She’s told she must have “something else going on” mentally. Outsiders to the marriage and maybe even therapists, will question if the wife was ever sexually assaulted. Does she have a history of trauma? They’ll try to make connections that aren’t there. Because how could a wife possibly not want to have sex with her husband?

Excuse me while I vomit in my mouth.

It is sickening and horrific to think of a woman having sex against her will, married or not. It’s disgusting that we automatically assume something must be “wrong” with a woman that is having a gap in her groove. Beyond all that, it’s dangerous.

Suggesting that married women and mothers should just “do it anyway” is sexual bullying and coercion. If a husband acts on the “just do it anyway” cliché and forces it — that’s called rape.

When we attack married mothers for not putting out, we’re reaffirming once again what’s important in this society.

We turn a blind eye when husbands pressure their wives for sex, because how could a husband demanding sex from his wife possibly be harassment? His sex drive is considered natural. His pleasure a given.

Marriage traditionalists are the most vocal about the importance of sex in a marriage. Their arguments, though rooted in hoary misogyny, sometimes draw on the more modern notion of “love languages.”

The love languages phenomenon started in the 90’s with a Christian-based book about relationships and marriage. One of the “love languages” is touch or physical intimacy. Marriage traditionalists will claim that if a partner loves through “touch,” it must be satisfied to have a successful marriage.

This idea in itself wouldn't necessarily be a problem. It could mean something as simple as: hey, my partner needs a little hand holding. (Fine. You got it.)

But, the troubling part of this book is when the author suggests that a wife in a toxic (and borderline-abusive) marriage should submit herself to her husband sexually for six months in attempts to repair her relationship.

Encouraging this coercive behavior on the part of a sexually demanding spouse is irresponsible and reprehensible. By not speaking out about spousal sex intimidation and abuse, by not holding husbands accountable, by not calling their pressure what it is — coercion and assault. It’s morally wrong, and it’s a crime.

We turn a blind eye when husbands pressure their wives for sex, because how could a husband demanding sex from his wife possibly be harassment? His sex drive is considered natural. His pleasure a given.

This type of erroneous thinking lends itself to less obvious assaults, manipulation, and even, in some cases, violence.

But because it can be done in a marriage, it’s even deemed normal and acceptable.

Mismatched libidos among couples can be frustrating. I get it. But, it’s also very normal and prevalent. So many factors can contribute to sex drive — external stressors in one’s environment, diet, sleep, medical issues, etc.

Postpartum women are given the green light to bone at six weeks after birthing a baby. Never mind the fact that pregnancy literally tears a woman’s body from limb to limb, molecule by molecule for nine solid months. Bah! You’re fine, get back on the horse!

Never mind that a new mother may have had full abdominal surgery, in the form of a C-section. That doesn’t take immense healing or anything. Never mind episiotomies. Seriously? Are you looking for a pity party, postpartum women? We all know it’s super easy to heal when your vagina is ripped from front to back. If you don’t want sex after vaginal stitches, what’s wrong with you, women?

Forget those postpartum haywire female hormones and sleep deprivation after giving birth. Those are just theories; that shit ain’t real!

Sarcasm aside, when a woman is out of the postpartum stage, her menstrual cycle returns. A period comes with its own set of hormone fluctuations that vary and change all month long.

Why are a man’s sexual needs the ones always tended to? What about what the women need? The mothers? What about the support they need to feel sexy?

Women are not only impacted by biology, but they are sexually influenced by social and cultural factors in their environment. For example, married mothers tend to work the majority of the “second shift.” Second shift is the domestic work done at your shared home, after working your paid job all day.

The conversation regarding mismatched libidos in heterosexual couples, in this culture, is completely backwards.

Instead of telling married mothers that they should do it anyway, even if they’re not in the mood, we should encourage men to do something that would contribute to a woman’s arousal.

A man’s actions, or inactions, in the household affect a woman’s arousal environment. We should expect married dads to pick up more of a woman’s second shift duties. That means helping equally with parenting and domestic tasks.

From the outside, people who berate and belittle women for not satisfying the sexual needs of their husbands are bullies. They are unsupportive. Their unfair, and frankly, deeply flawed marital criticism is rooted in years of oppression against women.

Their cultural kool-aid is pretty contaminated. Their moral compass is malfunctioning. No one, I repeat, NO ONE should think it’s okay for a woman to have sex against her will. Not even with a spouse.

Because sexual coercion in a marriage IS assault. And, sadly, in some cases, it’s rape.