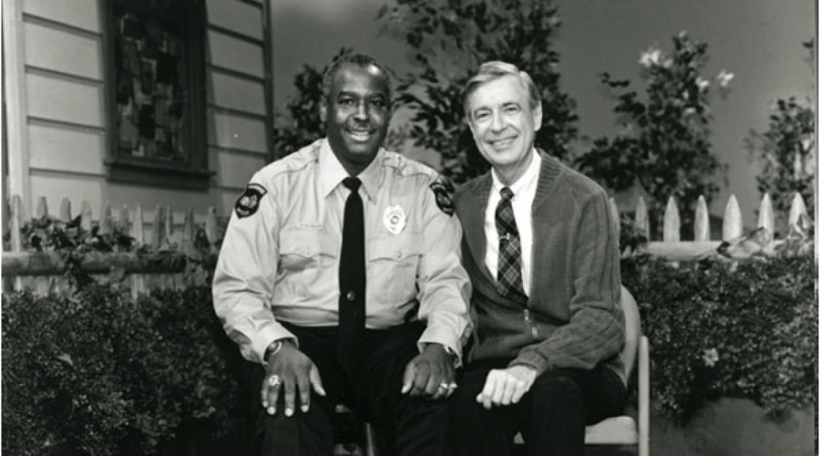 This year the face of Fred Rogers will be gracing a forever stamp, a documentary of his life has recently been released, and a biopic starring Tom Hanks is reportedly in the works. All of this makes perfect sense, as the original Mister Rogers Neighborhood television show premiered fifty years ago, in 1968. But all this talk about Fred Rogers, or Mister Rogers, as so many of us affectionately remember him, has got me thinking about my own lessons learned from his “television neighborhood.”

I’m not talking about lessons learned as a kid, but rather what I learned by watching the show all over again as an adult, with my own toddler.

I’m a very particular brand of millennial parent, one who loves research and is as anxious about not being a “helicopter parent” as I am about all the things that make me want to be a helicopter parent. You know the type, we talk big about not forcing ourselves to be perfect but also explain 90% of our parenting decisions with statements that start with “studies show.” As such, I was incredibly nervous about letting my precious child take the plunge into the world of TV. But like nearly every other idealistic parent before me, I found that desperate times do in fact call for desperate measures, and eventually found myself looking for things to watch with a kid who wasn’t yet two years old.

Either because I didn’t have time to preview new shows, or because I’m an insufferable hipster, I eased into the magic of screen time by putting on programs I remembered from my own childhood. Which is how I ended up binge-watching Mister Rogers’ Neighborhood with a totally delighted and enraptured toddler.

If you haven’t watched the show since you were little, I’ll tell you that it’s significantly better than you remember. Rogers is calm, friendly, and personable, and manages to talk directly into the camera in a way that is on a level with kids and never veers into the territory of condescension. It’s the way you wish you could talk to kids if you weren’t so exhausted, both relating to them where they’re at and yet owning that you’re the grown up. It is freaking mesmerizing.

While I had turned the show on for the benefit of my toddler, I quickly found myself sucked in.

The earliest episodes were shown in black and white, and Mister Rogers’ hair was still dark. As I settled in, I worried that a modern day toddler’s imagination couldn’t possibly be captivated by a black and white TV show, but I was completely wrong. His simple songs and inquisitive nature were already there, and rather than having to rely on the flashy and outlandish, he could turn asking his own son how to make a paper hat into entertainment.

Rather than each episode standing alone, they were originally shown in five episode (week long) interconnected blocks. There are a few advantages to this format, one of which is that it allows Mister Rogers and his cast of characters to approach a single theme from multiple angles. It also allows for a continuous “neighborhood of make-believe” plotline, which gives the world of talking puppets more depth and nuance. Thanks to the magic of the Internet, you can now watch Mister Rogers’ Neighborhood the way it was meant to be watched.

At the time, I had recently started therapy, mostly due to PTSD symptoms that had begun to really take over my life. I was struggling to be the caregiver that I thought my child deserved, while also failing at taking care of myself pretty miserably, and generally just wishing that I was someone else. I felt out of touch and panicky a lot of the time, and most of my energy went into avoiding my own emotions so I could get through the day and get things done.

Then, one day I realized that Freg Rogers wasn’t just singing silly and simple songs. He wasn’t just being comforting and easy going. Instead, he was repeating and rephrasing many of the things I was hearing in therapy. He was talking about emotional intelligence. From, “It’s such a good feeling to know you’re alive!” to, “What do you do with the mad that you feel?” he was giving kids a consistent and important message: You are fine the way you are; your feelings matter.

It’s a message adults need, too.

Most children’s programs try to spin every episode with a positive message, but those messages are fragmented and singular, and can sometimes feel lazily tacked on at the end. Kids get a dose of “it’s important to share” and “don’t be a jerk to your friends” with their entertainment. There’s nothing wrong with that, but what makes Mister Rogers brilliant is what separates the show from the pack. While the topics generally celebrate curiosity and learning (even through things as simple as blowing bubbles), the undercurrent remains more or less the same. For thirty years, this one man was on television, telling kids to listen to themselves and express where they were at.

In one of my favorite plotlines, King Friday (of The Neighborhood of Make Believe) is excited about a comet that will be passing through the night sky. He gets it in his head that it will be his comet, and he wants the whole neighborhood to celebrate with him. When it finally comes, he learns that he can’t actually own it, and he accepts this with some mild embarrassment. The show doesn’t take this opportunity to label him as selfish or greedy, instead his wife celebrates him. “My husband had a disappointment,” queen Sarah says, and points out how well he handled it.

I found myself thinking about it for weeks after the fact.

In his time on the air, Fred Rogers tackled some difficult subject matter, including death and loss. But it was the seemingly simple stories that got me. There is a timeless gift in simply acknowledging what one feels and then letting it pass. And there’s a joy in uplifting one and other by just seeing each other. How much better off would we all be if we heard, “Hey, I know that totally sucked, but you are doing great” a little more often?

As a parent, I often judge myself harshly and demand a ridiculous level of perfection of myself. I expect myself to always be on, and don’t give myself much room for bad days or even bad moments. Fred Rogers taught me that none of that is really necessary. I can meet my kid where he’s at, but also meet myself where I’m at. And that is a very good feeling.

All That Stuff You Said You'd NEVER DO When You Had Kids. #RealRavishly

Should You Ask Your Baby For Consent To Change Their Diaper?

If you like this article, please share it! Your clicks keep us alive!
Tags
binge-watching
Mister Rogers
Fred Rogers
parenting
parenting lessons