Sex Dolls! A Brief History and the Latest Incarnations 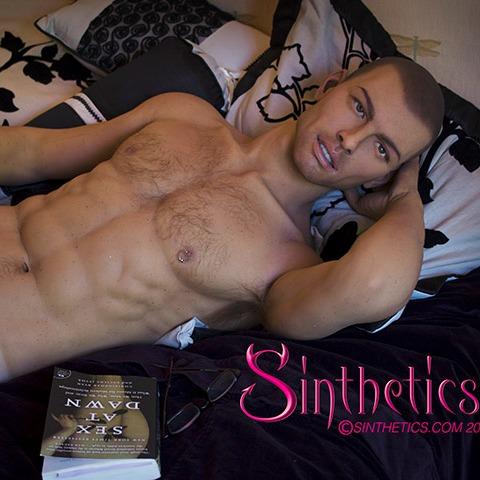 Sinthetics has launched a spankin' new line of male sex dolls and aside from the more obvious—why God why?!—reaction we're having, we're also duly impressed by just how eerily dead-on—off—these human renditions are. Rather than capturing the beautiful human spirit, these sex dolls look more like an exotic alien life form's dire attempt at disguising itself as an Earth dwellers. Oh, and they also have removable, ahem, parts depicting the various boner stages. You know, just in case you prefer a half mast one.

The abs on these things are admittedly desirable, but . . . those eyes. Sinthetics prides themselves on their nightmare/orgasm-inducing "manikins" (as they should.)

...we are proud of the beautiful, hand-crafted items we produce and want them to be appreciated as multifunctional rather than simply pigeon-holing them into the easy go-to connotation of the word 'sexdoll.' We view our products as usable art, and our clients as art collectors.

There you have it. Usable art, folks. And there's no doubt they take their craft seriously. Each figure starts with a digital scan of an real human (how do you get that job?!) but a hands-on sculptor (how do you get THAT job?!) actually morphs the figures into more pornolicious bods and imbues some personality into the face. And while we're fairly put-off by their creations, we've got to admire the skill of the design. Plus, these sex dolls (sorry, Sinthetics, that's what I'm calling them) remind us of just how far our flesh-toys have come.

The first record of a sex doll was technically in a story—in Ovid's Metamorphoses no less. (You know, that book you pretended to read in college). Back in the good 'ol days of 8 AD, sculptor Pygmalion hated and shunned all women. Alone in his craft, he sought to make life stem from ivory sculptures. He fell so deeply in love with one particular statue—Galatea—he lavished her in kisses, presents, witty conversation and generally just Swimfan level obsessed over her. Aphrodite, hearing Pygmalion's pleas to give Galatea life granted his wish instead of saying, "shut yer yap and just talk to an actual woman, already!" Needless to say, Pygmalion avidly banged the real woman 'til death did they part.

It wasn't until the 1400's that physical sex dolls surfaced however. Called a "dame de voyage" in French, these dolls were made out of cloth to, errrrr, accompany the sailors on their snatcheroo-less journey at sea. Awesomely, the same doll is called "Seemannsbraut" in German.

Speaking of which, the Nazis invented the modern sex doll. No shit! Seriously. Back in 1941, Hitler wanted his troops to stay STI free and the local prostitutes weren't helping. SS Heinrich Himmler set to work and commissioned 50 almost life size silicone sex dolls. Turns out, the soldiers were embarrassed by them. The project barely lasted a year before the cord was pulled. Imagine that.

Since then, sex dolls have only gotten more sophisticated. In 2009, the Germans upped the ante on their "Seemannsbraut" and developed a line of android sex dolls. These figures "breathed" and even had a "pulse" for a more lifelike feel. By golly, they even invented a male version! Nax, as it was called, looked utterly creep-tastic (appreciate: shaved head + ponytail) and supposedly had "artificial automatic ejaculation." Because, you know, everyone loves the messiest part.

Then, here we are today. Sex dolls are "usable art" and you can detach their penises. Hooray! Even the mighty Aphrodite would be pleased, right?