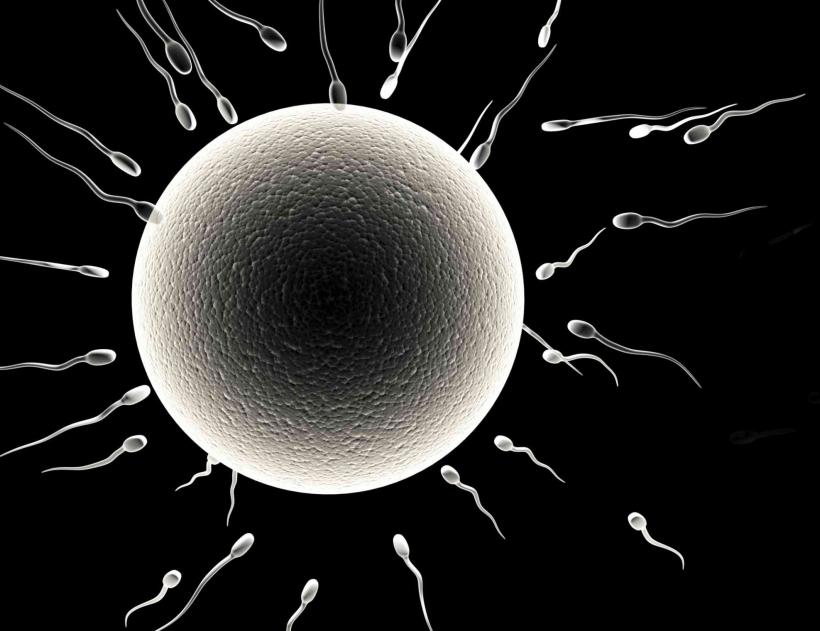 18 years ago, Maureen Ott became the first woman to undergo an experimental in vitro fertilization process—involving the cytoplasm of another woman's egg—that still remains a hotly contested and highly controversial topic.

"Regular" in vitro fertilization (IVF) involves the combination of an egg and sperm outside of a uterus—hence the term "test tube baby." The idea is that under the right conditions, the previously reluctant participants in fetus-forging will get their shit together under the close watch of scientists, and grow into a healthy, viable embryo that is then implanted in a woman's uterus which—fallopian-tubes crossed—will grow into a gurgling bundle of joy.

Now as life, society and everything in the solar system seems to do, this process has evolved quite a bit over the past two decades, culminating in a new procedure—the three-parent IVF—which for some, is drifting dangerously close to eugenics and a dystopic vision of humanity's future.

How the Procedure Works—And Why It's Controversial

1. Cytosol: Comprising about 70% of the cell volume, this gel-like substance is composed of water, salts and organic molecules.

2. Organelles: Literally translating to "little organs," this variety of "structures" are suspended in the cytosol and serve a wide swath of different functions.

3. Inclusions: Also suspended in the cytoplast, inclusions are non-soluble substances, like granules of energy-storage materials such as starch.

OK, herein lies the rub. One of the major organelles in human cytoplasm is mitochondria, which happens to carry its own DNA—37 genes to be exact. When an egg is injected with somebody else's cytoplasm, it's also being injected with minute bits of someone else's make-up, meaning that the future child will in essence have three parents.

The problem (among other, vaguer, more existential, Nazi-based fears of Franken-people) is that mitochondrial DNA can carry with it some nasty latent genes, namely mitochondrial disease, which renders mitochondria unable to produce energy for every cell in our body (including our brain, heart and respiratory systems, but with the exception of blood cells).

So in addition to providing the possibility of life for infertile women, there was also the chance of passing along this disease (among others) to the unborn fetus. This had the FDA up in serious arms; it believes this procedure should be considered a "drug treatment" and has yet to approve it to this day.

A curiosity of mammalian biology is that all the mitochondria an individual has are inherited from the mother. So, if the mother carries a mutation in her mtDNA, her children will have the same mutation. — Maureen Condic, Public Discourse

Currently there are still three research groups (two in the U.S. and one in Britain) that are doggedly pursuing this technology under the auspices of preventing disease—not countering infertility. By swapping out all the DNA of one egg with the mitochondria of another, the scientists believe they can eliminate the chance of passing along mutated mtDNA and counter otherwise dastardly diseases.

Not surprisingly however, these arguably good intentions are being eviscerated by questions of ethics surrounding the "bastardization" of our DNA:

Proponents of conducting human experiments to generate “three-parent embryos” cast this procedure as a beneficent therapeutic approach to treat women with mitochondrial disease and allow them to bear healthy children. In reality, it is a macabre form of eugenic cloning, in which a human being with a medical condition is killed and his or her parts are used to create a new human being with an improved biological state. — Dr. Maureen Condic, Assoc. Professor of Neurobiology and Anatomy, University of Utah

While these advancements are couched in the kind of utopic medical visions that are poised—at least theoretically—to eradicate much-dreaded degenerative diseases like Alzheimer's, Parkinson's and even aging itself, there is a tremendous amount of fear wrapped up in this particular procedure. People can't help but conjure Hitler's sinister and sickening plan for eugenics; a world comprised solely of blond, blue-eyed Germans forged from hate and suffering and blood. At best, three-parent naysayers liken this cellular tweaking to the realm of eerie science fiction a la Gattica; do we really want to live in a world where we design our own children?

To me, so much of the medical field operates in a deeply gray area. There are millions of people who—if we were to stride in lock-step with Nature—"should" die from a host of diseases and maladies of every year, but modern medicine saves their lives instead. From cancer and HIV to heart failure and multiple sclerosis, we've long been playing God. Organ transplants, vaccines, steroids, the use of stem cells, transfusions, and yes, even in vitro fertilization have been met with controversy, push-back and a barrage of ethical quandaries . . . and yet, have slowly been absorbed into routine medical procedures.

(And—which I posit for musing's sake as opposed to a steadfast belief—wouldn't it kind of be amazing to design our children? What if we could eliminate all disease and in its wake a tremendous amount of suffering? What if we could eliminate the fucking maddening fixation on physical beauty by rendering everyone "ugly" or "beautiful" . . . just level the entire aesthetic playing field all together so we could move on to more interesting topics of discussion? What if we were able to fundamentally alter society as we know it through the manipulation of DNA?)

What hadn't occurred to me in all this banter is the very stark reality of money. These procedures offer the possibility to create a perfectly healthy child . . . for a price. A high price. Daily Beast writer Jean Twerge explains that when the smokes clears, an IVF procedure will run a couple about $50,000, which is more than most American families make in a year.

The Latent Classism of IVF

While "designer babies"—meticulously crafted children that are auburn-haired, brilliant at math and ballet, etc. etc. etc.—are nothing but salacious dreams of science fiction (for now), three-parent embryos surface a troubling elitist classism of their own.

Will the fiscally flush fat-cats be the only ones who will benefit from these advancements? And how long will it take for this procedure to become routine enough that poor families could afford to bypass diseased offspring of their own? Twenge, who had a little child via IVF, has a bevy of her own questions at well:

Will we reach a time when only poor women have to worry about miscarriage? When rich couples will never have to receive the devastating news that their fetus or baby has a chromosomal or genetic abnormality? When lower and middle-class women will have their children in their 20s and 30s, while rich women wait until after 40? And will families like mine, with children all of the same gender, someday signal poverty? — Jean Twenge, The Daily Beast

Are "designer babies" a harbinger of Dark Days to come, a profound advancement in humanity's control of its own destiny—or something different all together?

If you like this article, please share it! Your clicks keep us alive!
Tags
Eugenics
pregnancy
in vitro fertilization
mitochondria transplant
three-parent embryo
Designer Babies