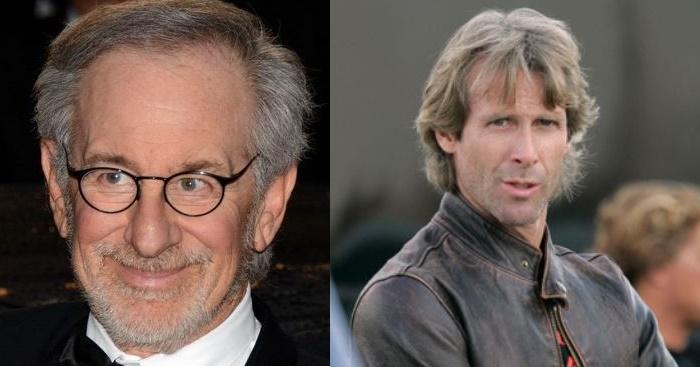 Let’s get right to it without any preamble, shall we? Steven Spielberg—the ‘80s and ‘90s wunderkind of film—needs to quickly and without apology or lengthy explanation disassociate himself from current mega-blockbuster director and producer Michael Bay.

Spielberg, I’m sure you recall, was the mastermind auteur of such visually dazzling nouveau sci-fi fairy tales as E.T.: The Extraterrestrial, Jaws, Close Encounters of the Third Kind and Jurassic Park. These films helped establish Spielberg as the god-head of modern American cinema (with his buddy George Lucas comfortably seated at his right hand).

Spielberg, having built such an incomparable and solid foundation of highly praised and financially successful films, has now reached the place where he can take a break from the rigors of writing and directing and assume the more stationary rigors of producing. One of the horses he has consistently backed as an executive producer? Filmmaker Michael Bay.

Certainly, I can understand why.

Over the course of several big-budget actioners beginning with 1998’s Armageddon, Bay proved himself to be the prince in the anteroom of Spielberg’s empire. He was to become Spielberg Lite.

Not unlike Spielberg, Bay creates fantastical worlds that are often unapologetically big; he fills the perimeters of a camera lens with as much depth and breadth, color and sound as possible, all in an effort to fully and completely immerse his audience in his fevered imagination. Unlike Mr. Spielberg, however, he's a racist, sexist hack.

The greatest difference between the two men is what appear to be their worldviews. While the King, i.e. Spielberg, seems a benevolent visionary set on providing nourishing storytelling meals to his audience, the Prince, i.e. Bay, seems to have more Machiavellian plans that involve feeding his ego and bank account(s) through a rigid, unimaginative and humorless formula.

In particular, Spielberg over the years has revealed a cinematic empathy for minorities and women. You have only to watch Sugarland Express or Close Encounters of the Third Kind (actress Melinda Dillon’s portrayal as a single mother in a frantic search for her small son and answers to otherworldly questions is surprisingly intimate and moving) to get a sense of his empathy, understanding, intellectual curiosity and appreciation of these groups.

In fact, I would venture to say African-Americans owe Mr. Spielberg a debt of thanks (though I'm sure I won't hear the end of invectives on this from a select few of ma brothas and sistahs) for bringing Alice Walker’s deceptively simple, touching, harrowing and incendiary novel The Color Purple to the screen. Spielberg’s convincing of studio heads to join him in producing and distributing a feature film about the life of an African heritage slave girl in the brutal American south (Whoopi Goldberg no less!) could have proven career suicide. Instead, the film was made of such undeniably powerful stuff that Oscar couldn’t casually avert his eyes from minorities again (at least for that particular year).

The Bay formula, on the other hand, revolves around a curiously odd, frozen-in-time view of minorities and women. Which is odd considering he attended Wesleyan University, a liberal arts college in Connecticut founded by Methodists.

Then again, maybe that’s exactly why his views of minorities and women appear to be rarified.

Witness the character of Glen Whitman in the first Transformers movie. This character was played by actor Anthony Anderson—most recently of the last few seasons of Law & Order and currently playing the father on a TV sitcom titled Black-ish. The character of Glen Whitman was that of a master computer hacker; a brilliant young coder and decoder on the wrong side of the law. I can only imagine the character that Anderson read on the page (from a script credited to Roberto Orci and Alex Kurtzman) differed wildly from the character he was directed to play on the soundstage: On screen this “brilliant hacker” seemed nothing more than a compendium of the broadest Steppin’ Fetchit comedic stereotypes: loud, foul-mouthed, disrespectful, wide-eyed and clumsy.

A pity, since Mr. Anderson has, over his underrated career, played a variety of comedic and dramatic roles. And with each role—from the ridiculous Louis Booker in Kangaroo Jack to the steadfast Trooper Brown in The Departed—Anderson has proven himself a more than capable if not enviably talented thespian. And even in the embarrassing role of Glen Whitman, it seems Anderson choked down his bile and fully committed—I’m sure in an effort to stun the audience and other filmmakers into remembering him much the same way as Chris Tucker served as the thousand-volt electric shock that woke audiences up during the second half of Luc Besson’s sleepy sci-fier The Fifth Element.

Unfortunately, Ms. Fox—yet another actor I believe to have talent that has yet to be mined—appeared to have been directed to be little more than eye-candy for the teen boys and boys-masquerading-as-men who grew up destroying LEGO towns with Transformer action figures. She was a character used as a prop.

Now, don’t get me wrong: I love looking at the ladies.

I could look at sexy, butt-kicking, wise-cracking and witty Angelina Jolie all day long in movies such as Tomb Raider and Mr. and Mrs. Smith. I, however, cannot watch Ms. Jolie for a minute in Salt or for a second in The Tourist because, well, the movies and the characters that inhabit them just aren’t that interesting or memorable.

Which brings me to this conclusion about Mr. Bay: There is something clinical, antiseptic and calculated about the use of women in his films. It’s not even soft-porn. His use of women seems, in point of fact, to be devoid of any sexuality at all. Perhaps this is why his female characters—regardless of how scantily dressed and body-oiled they are—seem completely lifeless. Like less than mannequins.

In conclusion, consider this my open message to Mr. Spielberg:

Certainly, you are a big boy with big bucks who can look out for yourself. But as a consumer of movies, I simply must protest this continuing executive producer relationship you have with Mr. Machiavelli—er, Bay. You, Mr. Spielberg, seemed at one time to care about the cinematic cuisine you fed your audiences. Now it seems you’ve let a man into your kitchen who is content to feed his audiences shit dipped in sugar and served with caffeine-infused energy drinks.

Yes, he’s making you money. In no way can it be argued that Mr. Bay’s shit-and-sugar movies don’t make money. They make loads of money! They are the crystal meth of movies; highly addictive and at the end of the high, leaving viewers with a prevailing feeling of emptiness.

But when it’s two-dimensional stereotypical shit about me as a black man, and when the sugar is simply this year’s Victoria’s Secret’s go-to model pouting in a negligee and high-heels as buildings explode behind her, then it’s about time somebody stood up from the King’s banquet table and shouted, “This is shit! It’s all shit! Why have you given this pretender to the throne run of your kitchen?”