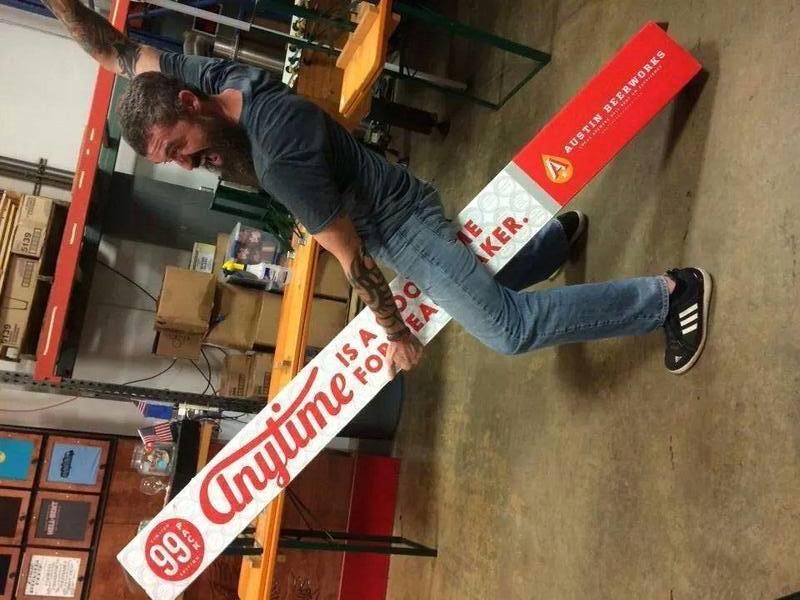 For the first time since I've moved to San Francisco, I want to pack my bags and start a new life somewhere else immediately. Why? Because Texas now has a 99-pack of beer. On sale. In stores. Right now.

Hailing from Austin, the small craft brewery Austin Beerworks is selling these 33x3 packs of their Peacemaker Anytime Ale for the summer delight of everyone. The package is about seven feet long and weighs 82 pounds, which means that it's the height of the tallest person most will ever meet, but weighs about the same as a Justin Bieber fan (or Bieber himself). Best yet: It's only $99.99. Talk about bang for your buck!

The packs were initially released as a joke, but unsurprisingly, customers in Austin are snatching them up fast. The company only produced 20 packs at first, but high demand has required them to produce more. All of which leads me to wonder two things:

1/ Why wasn't this around when I was in college? Oh, the possibilities.

2/ What's up with that old school-bus song "99 Bottles of Beer on the Wall" anyway? When you think about it, an alcohol-promoting kids' song is pretty damn weird.

I did some research, and discovered that the tune is derived from a British song called "Ten Green Bottles." That version is both G-rated, as alcohol is not referenced, and anti-sharing economy (its lyrics are "if one should accidentally fall" vs "take one down, pass it around"). Somehow from there, the song morphed into a drinking jam for kids, perhaps as a way for youth to feel cool and adult without actually having to imbibe.

Another fun fact: Bizarro comic Andy Kaufman, famously played by Jim Carrey in Man on the Moon, used to perform the song in its entirety during his "comedy" routines, much to the chagrin of his audience.

The song is also much-beloved, strangely, by mathematicians. One wrote a whole dissertation about using an "infinite loop" version of the song to teach complex math concepts. The song, he claimed, carried "pedagogical value." Or something. Meanwhile, another adorable nerd once translated the lyrics into over 200 programming languages.