How One Pastor Is Using Sex To Sell Faith 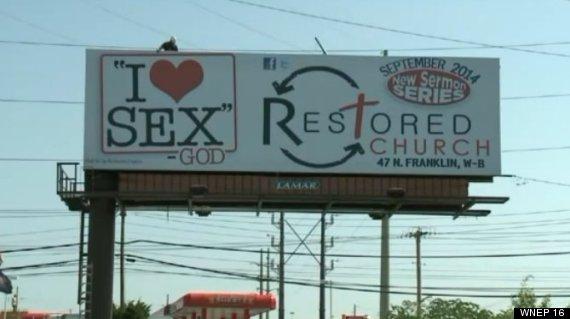 It's no secret that secularism is rising in popularity, leaving religious institutions scrambling to recruit new members. Recently, we wrote about one inventive attempt to lure more people to the church: the Lacy Chabert film Christian Mingle. Now, we bring you the tale of a 26-year-old pastor who's using the oldest adage in the book to overcome religious apathy: "Sex sells."

Pastor Dan Nichols of the Christian Restored Church in Wilkes-Barre, Pennsylvania, recently erected a giant billboard that reads "'I Love Sex' - God" to advertise his church services. As he explained to the Huffington Post:

The Bible is relevant to everyday life. When it comes to sexuality . . . God is the the inventor, author and creator of it.

The Restored Church is fresh on the bible block, with a history that makes it an outsider among traditional religious institutions. Instead of keg stands and marathon study sessions, Nichols and his dorm mate, Tim Walker, spent their college years dreaming up the idea of the Restored Church. The two added more to their team, underwent proper religious training, then opened their doors. In true university fashion, the church's first location was situated in the middle of the school's known party area.

Quickly, the Restored Church attracted a large crowd. And now, with this billboard, it's poised to grow more. Though Nichols admits they've faced some serious backlash from other Christians, you have to admit the billboard is eye-catching.

All of which raises a question: As faith continues to decline, can movements like this salvage religious participation?

While it's easy to dismiss the billboard as a ridiculous gimmick, its progressive message about sex actually has legitimate appeal. Historically, the Christian church has treated sexuality as something to be condemned in circumstances outside marriage. In recent years, though, this view has shifted considerably; one recent study, for instance, revealed that Christians now have a "broad acceptance" of both premarital sex and cohabitation.

As views on sexuality evolve, churches will have to evolve with them in order to stay relevant. In this sense, this billboard is just a particularly egregious example of more powerful forces at play. Snicker over the billboard today, watch it blossom into a religious revolution tomorrow? I'll bring the popcorn.