Lena Dunham Launches Advice Vlog—And It's So Awesome, I Hate Her 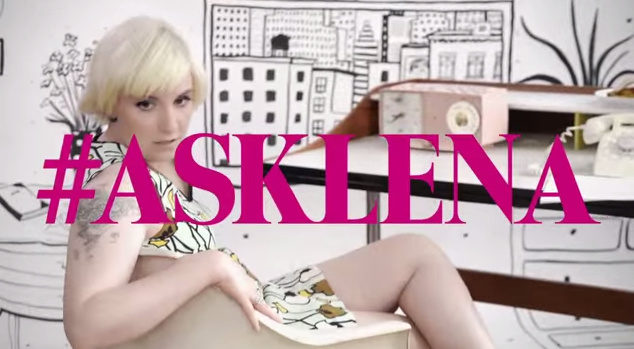 Last night one of my best friends texted me with a mysterious link: "Guys, she's a little bit of a dream really. KT don't you wish this was the Ravishly advice column?"

I didn't know what I was clicking. But then, there it was. Lena Dunham's brand new #AskLena series in which she gives video advice to random readers who have written in. Her weird platinum pseudo bob? Awesome. Her too-short poppy-patterned retro dress? Adorable. Her fucking shaggy dog strewn across her lap? The semi-surreal set that looks like a line drawing? Her honesty, insight and humor to every question? Despite any formal training in the human mind?!

But herein lies the rub. I have a confession to make: I have a very conflicted relationship with Lena Dunham.

Back when I was grad school—like seven billion years ago in 2008—I was interning at The Onion, living in Brooklyn and working on a TV pilot with my best friend from boarding school. Know what it was about? Being 24 and living in NYC. We were fighting to be known, to be loved, to be making enough money for a sixth floor walk up with a bathroom in the hall; to not being trampled by men, rats and a host of exhilarating and often humiliating sexual escapades. We were writing about drugs and jobs and corporate soul-crushing and roommates and body image and female friendship.

Basically, we were writing Girls. Of course I didn't know that then. And if I'm honest with myself, there was probably a host of other women who thought they were going to create the next Sex in the City, too.

The point is, I was so fucking disappointed in myself that I never finished the project or pitched it to anybody (instead I went ahead and took a 9-5 at an architecture magazine, le sigh). And due to my lingering regret, I have not, to this day, watched one episode of Girls. Despite every friend I have telling me it's brilliant and I'd love it.

The problem is that I'm a highly excitable, neurotic and envious person—and I'm frankly too scared that the show will be better than anything I ever wrote or articulated. Lena Dunham is such a charming, unassuming, openly weird and self-loving/loathing human; she feels like an inverted star who's so bright, I can't look directly at it. Instead I squint at her sidelong wishing simultaneously that she would implode and also be my best friend. I imagine many feminist writers feel this way.

The irony is so palpable, so thick and pea-green with envy, it's like old goulash in my mouth. Why can't I just love her? Why can't I watch her show and celebrate her success? Why must I want to be her and destroy her? Why have I succumbed to every bad female stereotype described in every psychology book written since 1945?

In analyzing my neurosis a little closer than usual, I suppose it's because I feel like a very similar female creature. I think the Venn diagrams of our worldviews would have a chilling overlap. Depressive, painfully self-aware, unabashedly into sex, neurotic, scared of dying, unapologetic for being loud, crass and generally an "unconventional" female.

But of course, this is how everybody feels—this is why she's taken society by storm. I am not alone in my feelings of kinship; rather I am surrounded by a deafening chorus of women all screaming, yes, yes, yes!

So I guess when the smoke clears, it's really about my own shit. What am I brave enough to say myself? About myself? What do I have to leave behind that wasn't forged in my uterus, but in my mind and body and words? The trouble is, this remains to be seen.

So. Without further ado I give you my psychological love-thorn: Lena Dunham.

If you like this article, please share it! Your clicks keep us alive!
Tags
Lena Dunham
Not That Kind of Girl
#asklena
feminism
female relationships
girl-crush
envy
Brooklyn