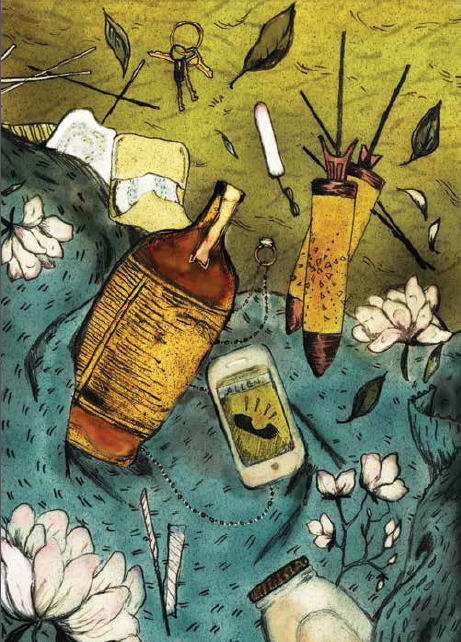 Labor Day promised independence from pawing bosses and boyfriends who thought themselves deities. The moon sauntered out from a curtain of clouds, whispering, “All things must end.” Even freedom—nebulous as a wisp across the sky—eventually ends. Because rent costs more than a wink, and parents fret and call and yell, and starvation in a land of omnipotent fast-food chains is a reality. Because ordering the number one combo does not conclude your choice-making for life. It gives you a sloppy burger and over-salted fries that you have the privilege of scarfing down and resenting for the rest of the day.

So the three sisters flittered through that leg of the city that squats over the river. The girls panted and fluttered like three baby bats carrying a picnic basket full of mason jars. Those jars contained the late liquid lunch the sisters had prepared for an evening of fireworks. Three-hundred and sixty-four days earlier, the front page of the newspaper had shown gold flecks exploding above the shitbrown water. The photo would have made an ugly postcard, but the newspaper had the nerve to sell it as a print, anyway.

If enough grandmothers wanted it to liven up their nursing home apartments, the newspaper stayed in business. But some astute layout editor had
let the wrong date go to print: 2004 when it was 2014. It wouldn’t have mattered except that Facebook had already been invented.

“I don’t even care about that stupid mall goth,” Nissa scoffed. Sheyanked her end of the picnic basket handle too hard and somehow
scratched Amelia in the process. Chandra, who had stopped helping with the basket a few moments earlier, was rubbing her engagement
ring.

Nissa shrugged and muttered sorry. “Anyway, he’s married now. He’s got a baby. This gross thing with alien eyes. What the hell is he
doing friending me?”

Chandra, who was now walking ahead of the younger two, sighed.

“Can we just watch the fireworks?”

“First we have to find a seat near a place where we can bury your bottle of bourbon,” Nissa said. “Then we’ll watch the damn fireworks.”

“Wait,” Amelia said. “You never told me about any bourbon.

“Oh!” Nissa clasped her hands and squealed in a mockingly high voice, “Don’t you know? There’s a Southern tradition where you bury a bottle of bourbon a month before your wedding date so it doesn’t rain. And even though we’re not Southern— “

“It doesn’t matter if we’re not Southern. We’re getting married in the South.”

“Yeah, like Charleston Barbie or something, except that you chose River Rat Central.”

Chandra glared at Nissa. When Amelia placed her hand on her shoulder, Chandra shook it off. Dozens of other city low-lives trekked over the broken sidewalks toward the overlook. All the clean-cut citizens were watching the fireworks at the baseball diamond, but not until after a heartfelt rendition of “The Star Spangled Banner” blared across the stadium, no doubt. They would sing with hot dogs in hand, dimples twinkling
with dewey goodness.

Chandra, Nissa, and Amelia all had the same voice when they sang, which is one of the reasons why they didn’t like to sing together. Another
reason was that singing in unison made them resemble three green-eyed trolls—nostrils flaring, clutching their bellies when their ribs said enough. Thirdly, Nissa turned any song to sex, despite Chandra and Amelia’s protests. “La vie en rose” became “La vie en hoes.” “Jingle Bells” was “Jingle Balls.” Even “Happy Birthday” was “Happy Boob Day.” So they hadn’t sang together since high school.

“Did you know he knocked up Savannah Harrison junior year?”

Nissa stopped and threw down a blanket in one of the only clearings left. The girls plopped down.

“The one with the pierced nipple?” Chandra asked.

“Yeah, but Katie Weatherford had a pierced nipple, too.”

Nissa said, “Anyway, Savannah had to get an abortion.”

“She didn’t have to,” Chandra said.

“She could’ve had the baby.”

“So if you got pregnant now, you’d have the baby?”

She paused and pulled a mason jar out of the basket. “Maybe. I’d have to ask Allen and see what he thinks.”

“How is it at all his decision when it’s your body?”

“What if it’s my only chance? What if Allen wants to keep the baby and raise it as our child?”

“You’re 24. You can try again when you’re older, when you’re ready. After you’ve finished law school.”

Suddenly the fireworks boomed, illuminating the bridge and the Civil War ruins before descending to their death like shooting stars destined for the river. Starting as a deep crimson, the fireworks quickly tapered off into a salmon pink before disappearing into the depths of the James. The city—uncomfortably humid, cars pulled over to the side of the street, lightning bugs living out their last days—was temporarily suspended by the fireworks’ magic. Yet the magic did not touch Chandra. An anxiousness took hold of her for a minute, maybe more, until she felt the familiar bloody warmth
return to her crotch.

“Do you have a tampon?” she asked Amelia quietly, still staring at the fireworks.

“No, I stopped using them.”

“You’re putting them in wrong. Give me a pad.”

Amelia fished the pad out of her raggedy knapsack and handed it to Chandra. “Would you come with me? It’s Noah’s flood down there, and I need a look-out.” Amelia rolled her eyes and stood up with Chandra.

Nissa glanced from the fireworks to her sisters as they slunk toward the woods. “Where are you going?”

“To piss,” Chandra called over the roar of the fireworks as she and Amelia sped up. The outline of a red heart lit up the city’s humble
skyline.

Amelia and Chandra ambled down an alley until Chandra saw a nook in the bushes. She backed up into it, got down, and pulled down her soiled panties. She shivered as her urine carved a little ravine in the dirt.

“I got an abortion,” Amelia said.

Chandra, who had just unwrapped the pad, stuck the adhesive side to her pubic hair in shock. “What?”

“Yeah, the same day as Katie Weatherford. That’s how I know her nipple’s pierced. We were at the clinic together and she got it done
right after. Well, not like right after, but a week or two—“

“I would’ve been. But Henry Newport put a pillow over my face when we were studying at his house one day after school,” Amelia
said very simply before breathing out, “And he raped me.”

Neither one spoke. The crickets chirped loudest with the fireworks sounding like bombs in a distant land. Chandra ripped the pad off her vulva, winced as the adhesive tugged at her curly hairs, and placed the pad inside her panties. She wiped her hands and stepped toward her sister. Amelia froze when Chandra hugged her.

At that, Amelia burst into sobs. Chandra squeezed her tighter and tighter the harder Amelia shook. Chandra thought of every woman who had ever been raped, going back to the slaves who once worked the earth they were standing on, to the Indians who lived there before, just generation after generation of women attacked by men who saw no wrong in their transgressions, whether in sprawling plantation mansions or beneath blooming magnolias. There was no such thing as a picturesque violation.

When Amelia’s tears finally ceased, Chandra grabbed her hand and walked her back to Nissa. But instead of sitting, Chandra and Amelia
stood to watch the last fireworks die, fingers laced. Nissa bolted up at the end of the show, attempting to carry the basket by herself.

“Hurry up! We have to beat the rush,” she snapped.

“I’d have it,” Chandra blurted.

“If I got pregnant now, it wouldn’t matter what Allen wanted. I don’t want a baby right now.”

Nissa did a double take.

Fall Out was the city’s notorious goth bar and fetish lounge. “Are you okay with that?” Chandra asked Amelia, locking eyes. Amelia grabbed the basket handle to help Nissa. “Sure.”

Then the three rushed to the sidewalk where the rest of the crowd was already heading.

“Your phone’s ringing, Chandra,” Nissa sighed. Chandra dug through her purse while she ran to catch up with her sisters. Though Allen’s name popped up on caller ID, she turned the phone off and dropped it back in her bag.

When the sisters loaded into the car, Chandra blasted the radio and belted out “My Moon My Man” along with Feist. Nissa mouthed the words until Chandra urged her to sing louder. When Amelia joined, they formed one perfect harmony, not caring if the strangers on the street couldn’t tell them apart.