They Look Cool In The New Disney Trailer . . . But Were Cinderella's Slippers Really Made Of Glass? 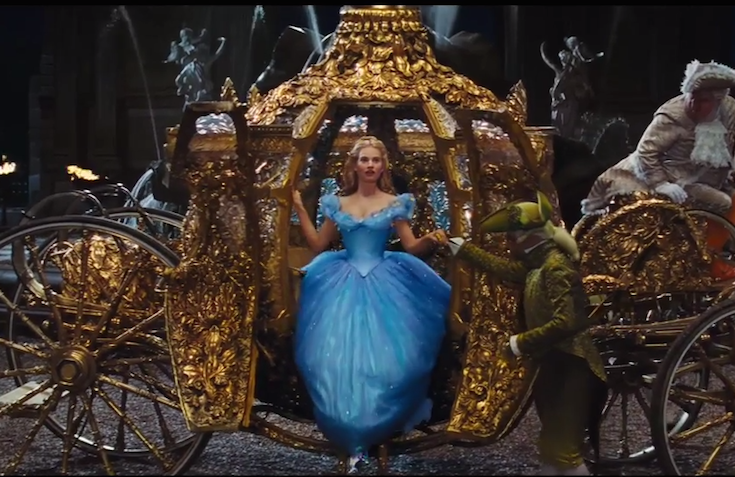 The great cartoonist overlords at Disney studios have dropped a gem on us lowly peons today: the full trailer for the upcoming live action Cinderella flick. Previously, all we got was a spinning shoe. Now that we can ogle at Cate Blanchett's evil smile, the whole thing seems real.

Even though the full trailer provided viewers with a greater glimpse of the glory ahead, much attention is paid to those infamous glass slippers. Fairy Godmother assures Cinderella that they're actually comfortable (not buying it). Women's Wear Daily noted that the shoes in question were made of Swarovski crystals, and based on a pair (roughly) from the same era as the film's setting.

I can't imagine that Swarovski crystals are anything approaching "comfortable"—but I digress. As you likely know, the type of shoe worn by Cinderella in the French version* has been heavily debated by scholars. The prevailing theory was simple: Cinderella wore shoes made of squirrel fur, but a mistranslation occurred (either orally, or in the written word) and, thus, "glass slippers" was born.

But the urban legend sniffer-outers over at Snopes aren't buying this. They argue that it's highly unlikely such a mistake would occur. Why? It comes down to two phrases: either "pantoufle de vair" (fur slipper) or "pantoufle de verre" (glass slipper). We (okay, maybe just I) may think that these words look almost interchangeable, but the same can't be said for a linguist. Snopes researched, and noted that the word "vair" was an outdated way to say "fur" when Cinderella was written. So let's think about it in today's terms. Could you picture a 13 year-old girl excitedly talking about her totes adorbs "frock" that she's wearing to Thanksgiving? Nope. Therefore, the glass slipper was probably a bizarre attempt to tell a tale.

Or is it? A newer theory is emerging: amber slippers. The early Germanic words for "glass" and "amber" look similar—possibly to con people into buying one or the other. Perhaps they were amber to begin with, then translated into "glass." And amber-colored (not actual amber) shoes were popular. Apparently they disguise sweaty feet well—unlike, you know, glass shoes.

Now, won't this curiosity make for a solid excuse to watch a Disney movie in theaters next spring? It's cool lady, you're just researching.

*Note: many cultures have similar stories, but the French tale is the most famous in Western society.