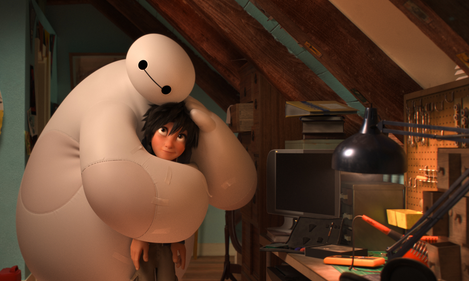 On July 26th of this year, my mom died. Six weeks later, I got laid off from my full-time job.

I'm not in dire financial straits right now—I built up a decent severance package from working there for so long and have been freelancing like a mofo ever since—but even still, I've been in kind of a funk lately.

I start off fine in the morning, coffee in hand, ready to see what lies ahead, but I can barely utter more than a few words by the evening. I just lie on the couch, staring at the TV, feeling obsolete. The only marketable skill I really possess is editing, but all you have to do is take one look at the latest BuzzFeed article to know how little good editing is valued in 2014 (much love, BF, but you need a proofreader. Hire me maybe?). I go to bed feeling like shit.

Baby animal videos are pretty much the only thing that can lift me out of it.

Last Wednesday I went out to the movies to see if it would help quell whatever’s going on in my weird, anxious brain. I saw Big Hero 6, since it looked cute—I, somewhat inexplicably, find it utterly hilarious when big men (or in this case, robots) do dainty things, and the commercials showing a hulking marshmallow man tiptoeing his way through tight spaces never failed to make me chortle. Though everyone in front of me in line was seeing Interstellar, I ordered up a ticket to Big Hero 6.

It was . . . fine. It was cute. It was about what I expected. But what I didn't expect was this (spoilers ahead): It's established at the outset that main character—Hiro—has parents who've been dead for a while now. Then a little later into the film, his brother dies in a freak accident.

Though these deaths serve as the catalyst for Hiro’s self-discovery and myriad other life lessons we, the audience, are supposed to learn, all I could think was, "Holy shit, this kid has gone through an immense amount of trauma for a 14-year-old. He needs some therapy!"

I know that's not the point—losing his brother forces him to discover his own strength, you never really lose someone as long as they’re in your heart, blah blah blah—but more than that, it left me reflecting on how much more mature Disney movies have gotten in the last five years. I'm wondering if the company is finally starting to realize that kids are way more sophisticated than we've previously thought. And pandered to.

Children's stories have always dealt with death: Folktales are full of it, as are a good number of fairytales. Many of which that served as the inspiration for Disney films, treat death as, well, a fact of life. In fact, it's kind of hard to find a children's story before 1900 that doesn't touch on death in some way (the company I just came from had a strict “no death” policy on children’s content, and I can’t tell you how many times I had to rewrite a fairytale so that the villain just kind of . . . disappeared).

The treatment of death in children’s media has trended like all other things, reflecting the reality of the time of production—after the Victorian period, mortality was on the upswing, and it was likely kids could go all the way to adolescence without losing a loved one. As the decades wore on, children’s stories often ditched the death for happy endings.

Disney came to fruition as a company not long after the close of the Victorian era, and you can see it slowly creep away from death as it turned taboo in society. The earliest Disney films treat death as our ancestors did—all I have to do is say ". . . Mama?" to remind you.

But even then, it gutted the majority of the gore present in the original source material. In Snow White, the evil queen is forced to dance herself to death in scalding iron shoes, and in various versions of Cinderella, the stepsisters are either rendered blind or murdered for their wicked ways. And somewhere along the way, Disney became synonymous with safe, milquetoast entertainment that parents could trust to keep kids occupied, even obsessed. When death had to come to Disney, only villains got the axe, and even then it was never a confirmed kill—most of them simply fall of a high cliff, never to be seen again.

But lately? Lead characters have been dying, and so much more conspicuously.

I can't think of a time in the company's history when death itself has been as essential to the plot and character development as it has been in recent years. For at least the last five years there's been a string of films from the company that feature not just the death of villains, but the death of protagonists, spending ample time showing the good guys grieving and coping.

The obvious example you’re probably already welling up over is in Up, which cuts abruptly from happy homemaking scenes to a stark hospital, then a funeral parlor. In the first ten minutes. (BRB, crying). You can even go back a little bit further, to 2009's The Princess and the Frog, where the princess’ scrappy animal sidekick Ray the firefly (there’s always one of ‘em), gets squished by an evil sorcerer, and we watch his—get the tissues—little light go out.

In 2010’s Toy Story 3, Woody and the gang escape the flame-engulfed maw of the incinerator, but just barely—we are purposely made to think they’re about to die, and they, OMG, start silently saying their goodbyes to each other. In Frozen, which earned accolades for taking a huge leap away from the some-day-my-prince-will-come trope, Anna and Elsa's parents die in a shipwreck. The way it's communicated isn't obvious, but it's not subtle either. It plays a huge part in the movie's theme that lantern-jawed Norsemen come and go, but at the end of the day, family's all you've got.

But this new death-obsessed Disney isn't a bad thing. Kids are smarter than we think. By toddler-age, they know that death exists—though they’re spotty on the details—and by age 5, most kids can grasp the universal, irreversible nature of it. While it’s never as easy a lesson as ‘just be yourself,’ death has been done before in children’s media, and done well: Sesame Street was famously forced to tackle the Grim Reaper when one of their own passed in 1982, and they sought the help of child psychologists to explain to their young audience why Mr. Hooper wouldn’t be coming back.

Grief can manifest itself in children in many ways, but normally stems from the death of a loved one—not a cartoon character. In fact, most professionals encourage children be exposed to concepts of death—not so that they’ll become desensitized to it, but so they’ll ask questions that can, hopefully, be answered honestly by an adult they trust. Disney’s new treatment of death is as responsible as it can be—it might cause some tears, but, when done as delicately and truthfully, it won’t scar them for life.

I can’t help but wonder if this is the beginning of a new identity for Disney—in addition to addressing death, they've moved beyond true-love’s-kiss to start dealing with more complex themes like the bond between siblings, the much-dreaded mother-daughter relationship, the difference between love and infatuation, and how tacky it is to announce your engagement at someone else's coronation ceremony.

Maybe they're finally catching up to kids.