Inside Out: How Pixar Fails At Body Positivity And, Well, Everything 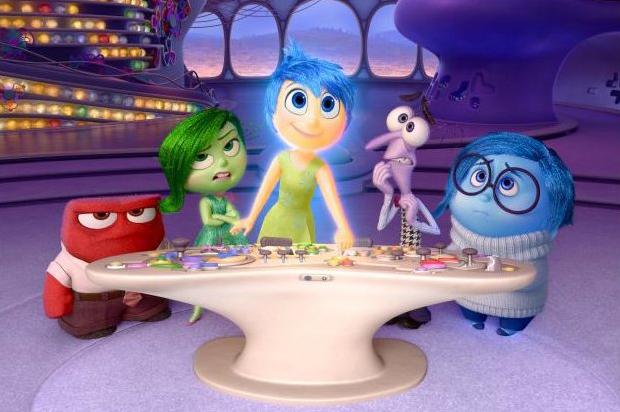 I have five kids. Five of them. We don’t go to the movies as much now that my bigger kids are so BIG (seriously, one of them is 6’1”), and the little ones have pretty much zero interest in movies. We have a TV (we aren’t that weird), but we don’t watch it much. That said, I’m sort of out of the loop when it comes to pop culture. I've only read about the new Pixar movie Inside Out — which will be in a theater near you and all around you on Friday (even tonight in many places). I had no plans on seeing it, really, but now that I’ve read about it and a had a friend confirm my suspicions, I will for sure not ever be seeing it.

Like any good feminist, I object to parts of Snow White (um, Prince rescuing her with kiss? No.) and The Little Mermaid (uh, have fins? Switch for legs? For a man? No.). And like any good body-positivity activist, I question why I can’t even take my kids to a movie for flip's sake (not that I would, but we’re speaking hypothetically here) without a collective sigh and a real, genuine head shake/eye roll.

I can’t write with any true authority about Inside Out, because I haven’t see the movie, but seeing the movie really isn’t required to make this judgment. Because here’s the thing about movies: they are made of pictures. And visual memory is more reliable than auditory or tactile. That’s right folks, we remember what we see.

Just take a minute to think about the implications of that.

And what are we seeing exactly?

Well, the movie is a look inside the mind of an 11-year-old girl named Riley. I’m not sure what we’d expect to see in there, aside from One Direction and the remnants of some forsaken Barbies that now find themselves stored under the bed. Pixar wants us to see in Riley’s mind, and that’s clever. Cute, even.

Except here’s the problem: what's apparently in Riley’s mind is a tall, lithe, human-looking girl with a pixie cut named Joy, obviously. Her counterpoint is a short, chunky, sad-and-blue...person (I presume) with an emo haircut, named, you guessed it, Sadness.

In fact, why have any of these characteristics been assigned to her?

Well. Probably because someone at Pixar thinks fat people are sad. Because they are fat. And how could they be fat and smile? Fat people have some nerve. Also, their poor vision is apparently causing them some distress. Joy doesn't wear glasses. She probably had Lasik. Because she is probably also rich. Rich, white (well, white-ish) people are also Happy. And she gets to wear a cute little dress, which she probably bought at Nordstrom, while Sad is shrouded in what is probably an itchy-ass thrifted wool sweater. Maybe that’s why she’s Sad.

All of this makes me sad. Just when I think we are starting to get it — there’s an African-American lead female protagonist, Rapunzel takes care of herself, Elsa is a general badass — something like this happens. And it’s like Pixar didn’t even know.

People of Pixar, can we stop stereotyping? Now? KThanks.

I wish it were that simple. The fact that someone who works for a major production company — in fact, probably many people that work for that company — cannot even see how this is problematic, is just...I don’t even know. Upsetting. Marginalizing. Saddening. Disturbing. And the fact that most of us will see the movie and think, “Aw, what a cute little movie,” well, it says something about us, our culture, and what we’ve been conditioned to think for so long that it isn’t even something we’d question.

Children are tiny, impressionable sponges. And small children, presumably the movie’s target audience, are the most impressionable. Ours don’t watch commercial TV for this reason. Have you ever really paid attention to commercials? Carl’s Jr. is using sex to sell hamburgers, for crap's sake.

Children simply cannot discern things that are nuanced. They don’t have the capacity in their tiny brains to say, “Hey Pixar. You are being a bunch of jerks.” They see Sadness — blue, fat, glasses on her chunky emo face — and guess what? That’s Sad. You just literally defined Sad for my 4-year-old. THANKS A LOT.

Meanwhile her mother (me) is writing and talking and practically screaming about body image and fat acceptance. Pixar, you are undermining me. I expect more.

Update: I've written a reponse to this article, which you can find here.

If you like this article, please share it! Your clicks keep us alive!
Tags
Inside Out
Pixar
Disney
body image