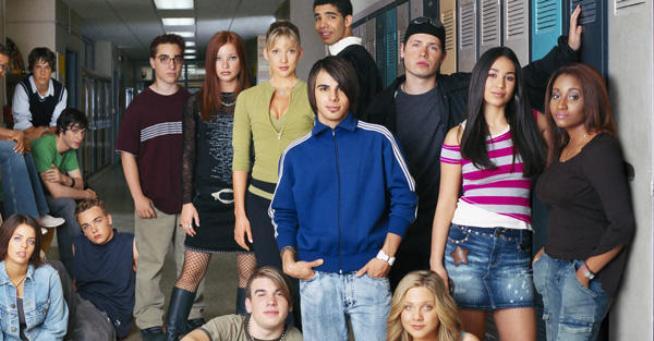 Three months ago, I got some of the worst news I’d ever heard: After fourteen seasons of “going there,” Degrassi (of The Next Generation variety) was canceled.

Multiple people posted the news on my Facebook wall, knowing that, even though I hadn’t religiously watched the show since 2011, I’d be devastated. And I was. “How could this be?” I wondered, my brain flitting back to memories of Spinner boycotting the cafeteria, JT’s untimely death (I don’t want to talk about it), and even Manny’s thong.

And apparently, I wasn’t the only one who felt that this atrocity — the official closing of The Dot! — deserved an uproar. Five days later, it was announced that Netflix would take over the series, revamping it as Degrassi: Next Class, starting in early 2016.

And like someone who was just awarded a new lease on life, I decided then and there that Summer 2015 would be, for me, the Summer of Degrassi. So, for months, I rewatched the entire series — starting with Emma almost getting kidnapped by that dude who tricked her into thinking he, too, was an environmentalist teen online, and ending with the super-weird kind-of-horror movie where, for some odd reason, Zoe kisses Grace (OK, I admit that the cliffhanger kind of worked on me — WHAT WILL HAPPEN NEXT?).

And it has been wonderful, despite having to suffer through characters like Ashley Kerwin and Fiona Coyne (#sorrynotsorry I don’t like Fi). Not only was I able to relive some great memories (that episode-and-a-half when Peter is addicted to meth is out of control), throw my hands up at unnecessary plot twists (Spinner and Emma? What?), and make new friends (I still can’t decide if I like Maya or not), but I also had the opportunity to see the show through a feminist lens and realize just how kick-ass of a series it really is.

So, as we all wallow in the waiting period between now and the start of season 15, let’s talk about why Degrassi is the perfect show for social justice warriors.

There was an old tagline for the show that simply said, “Degrassi: It Goes There.” And did it ever. By its 12th season alone, it had covered over 200 issues.

If you’ve ever had a problem, it’s likely that Degrassi has an episode (or an entire arc) that addresses it — and responsibly.

2. The Characters Allow for Better Examples of Diverse Representation Than On Most Shows

Let’s start here: Every single season of Degrassi: TNG has had multiple people of color as main characters with full-fledged stories both related and unrelated to their race. While I think that the show could have done a much better job at really digging deeply into race (and while I sometimes feel like their representations of black characters get somewhat stereotypical), I have to at least give them props for allowing people of color to, ya know, complex characters with full lives, rather than tokenizing them and sprinkling them throughout the series.

Furthermore, there are plenty of queer characters on Degrassi, too. Marco. Dylan. Riley. Zane. Tristan. Paige. Alex. Fiona. Charlie. Imogen. Jacque. And while some of the storylines are tiring (Riley is a gay football player? Really?), others are incredibly refreshing (like Jacque’s almost-breakup with Imogen because she’s polyamorous — and uses words like “heteronormative”).

Also, THERE. IS. A. TRANS. CHARACTER. Unfortunately, Adam is played by a cisgender woman (no offense, Jordan Todosey!). But the fact is that there’s a trans character who, yes, has trans-related subplots, but is portrayed as an entire human being with charms and challenges outside of his trans identity. Sadly, Adam eventually dies from texting and driving — but unlike how most trans characters are killed off, he doesn’t die in order to teach the other characters (or the audience) some kind of a lesson. (You could argue that the lesson here is not to text and drive, but the episodes dealing with Adam’s death never turn after school special-y. They simply — well — deal with his death.)

While the show could do better to show physical disabilities (aside from Jimmy) and fat characters (Terri was great...but the show never had another fat character), it’s doing a pretty OK job of not falling prey to the typicality of straight, white, neurotypical, cisgender characters.

I’m a little biased because Manny is my favorite character of the entire series (I love you, too, Ally and Imogen!), but she really is such an amazingly feminist character — all without being outwardly feminist.

She starts off as the cute sidekick of the show’s main character, eventually breaks off to explore her sex appeal and come into her own, experiences myriad challenges in the process (I’m still mad at Paige for what she did to her at prom — never mind how I never forgave Peter for circulating the “You can sell this for a million dollars” video of Manny flashing her breasts) and comes out on top, successful and happy and healthy.

She’s one of the most well-rounded characters on the show — and that’s saying a lot for a show where all of the characters, and especially the women, are multidimensional. There are times when you absolutely love her and times when you absolutely hate her (like most of the students at Degrassi), but you can’t help but support her, whether she’s in a weak spot or a strong one.

Bonus: They Use the Word “Feminism” — And Always Positively

People like to avoid the F-bomb when they can, but not the kids at Degrassi Community School. They sometimes talk about feminism outright — like when the school assumes Emma’s last name changed when her mother got married, and she angrily sighs, “Ugh, hello? Feminism?” — and while it’s generally of the white variety, it’s always uttered with a positive connotation.

So, is Degrassi perfect? Well, no. I can admit that. It definitely has a ways to go before it gets any kind of “Super Awesome, Spot-On Intersectional Feminism” stamp of approval.

But compared to a lot of other shows out there right now aimed at teens? It’s fantastic.

So my advice? Give it a chance. Here. I’ll even give you the link.

If you like this article, please share it! Your clicks keep us alive!
Tags
Degrassi
feminism
TV
children's TV