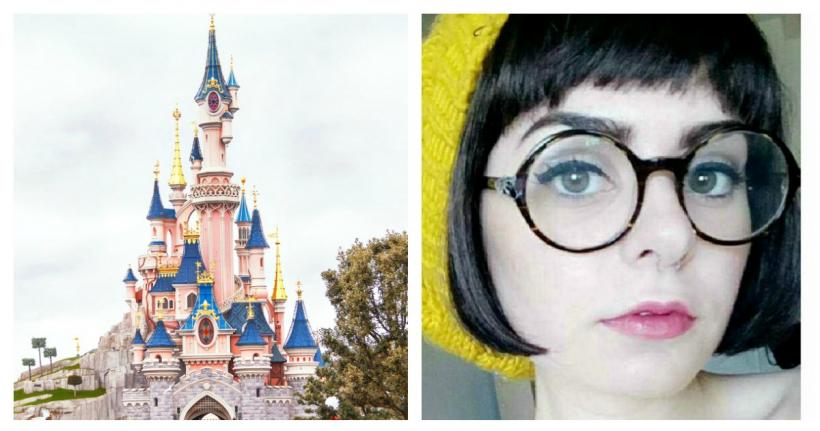 While I didn’t get in trouble, and they let the underage drinking slide, I could feel judgment. I didn’t report my attempted attack. Image: Mamamia team, author.

This article originally appeared on Medium and Mamamia.

This is a sensitive story to tell. Unfortunately, most the people who’ve heard this story, heard it through the grapevine. Not from me. So now you will hear it from me.

I did the Disney College Program in 2014. I was so excited  —  as most program participators are.

Prior to moving to California, the group of accepted interns chatted, found roommates, and made friends in a Facebook group.

There one was one guy who seemed to always be present in Google Hangouts and conversations. I assumed nothing of it. He had been a cast member already for 5 years, and was a DCP alumni. He was going to be “dorming” during the program as well, despite being older than the average age of most people in the program. I believe he was 28. The average crowd was 18-23 year olds.

We chit chatted privately occasionally. I admit to flirting, though I flirt with everyone. And flirting did not justify what happened. I admit to talking about marijuana.

But talking about weed  —  in a state where it is medicinally legal  —  also does not warrant what happened.

The first week of the DCP was filled with parties and excited young people. When I got invited to one  —  I was pretty excited. I had just moved to a new state  —  I was eager to make friends. I did not make any friends from this party though.

My roommate and I showed up, along with a few other characters who we had met. And my attempted rapist, let’s call him “Stephen,” was one of the hosts. From the beginning, I was uncomfortable and alert. Despite my discomfort, I tried to play life of the party. Precocious, flirty, and a little bit weird  —  my usual self.

I was not however, intending to get drunk. I think I had two drinks. This was my comfortable limit. I didn’t know anyone here, and I was still struggling with depression at the time. Alcohol is a depressant, and I knew it wouldn’t help me feel any happier to be getting smashed.

Stephen was insistent that I drink, though. He kept asking me if I wanted more to drink. Kept telling me to drink more. “Come on, it’s a party. Just have some fun.” The typical party boy jargon.

I kept telling him that I was on medication, that I had depression, that I would get sick, that I didn’t want to drink. But despite my consistent refusals, he kept pouring me drinks. And every time he turned his back I would dump them down the sink.

Something just didn’t feel right to me.

Several shots and drinks later, he was drunk. I still had my wits about me, though. Then he asked me to follow him. Not wanting to make a scene, being equally curious, and also easily peer pressured, I followed him. In my mind I was still thinking, This is Disney! It’s a safe place!

He said something about “since I’ve smoked weed before” and offered me a pill. By this point my head was reeling. I was in a locked room alone with this guy I don’t know. He was staring straight at me. I was uncomfortable, unsure if he was violent or aggressive. I didn’t know if I had the choice to just walk out.

But it didn’t look like an illegal drug to me. In fact. It looked like… Benadryl. I have Oral Allergy Syndrome and Hay Fever. I have lived off of Benadryl my entire life.

So I took a gamble. I played the hand I knew I did have. My sex appeal.

I flirted with him and said he should take one too. And he did.

If you aren’t aware, Benadryl can, and has been used as a date rape drug. Especially in conjunction with alcohol. You can read about it here, here, and here. And plenty of other places, but you have Google.

Stephen sat on his bed and I distanced myself and sat on the other side of the room waiting to see if by chance I did feel “something.” I did not. We continued to engage in conversation. But I was short in all my answers. I was visibly unamused.

Stephen continued to ask me to come sit with him. To go over to his bed. Stephen asked me to have some fun.

I was disgusted. He continued over and over again to bring up his history with the company, saying he could introduce me to people who could further my career.

“Coercing someone is a form of rape,” I told him.

And that’s when the most vile phrase dropped out of his mouth. “Oh come on, don’t call it rape, that’s such a turn off.”

I was stunned. Disgusted. Disrespected.

Just then there was a knock on the door. A girl was letting us know they were headed to “play” in the park. I ran to the door, unlocked it, grabbed my shit and booked it out the door.

He went to follow suit, but because he had been heavily drinking, and took the Benadryl, he tripped over a chair and fell over.

If it were not that someone had just attempted to drug and rape me with allergy medication, I would have been amused at how pathetic it was. I disclosed immediately to my roommate and another girl who was with us.

This was a mistake. While my roommate kept my secret  —  this other girl spread the news like wildfire. Not only did she spread it  —  she also twisted the story.

Within a week everyone knew me as either an actual victim/survivor of rape, or a liar.

No one took my side. No one considered I was perhaps telling the truth.

I consider myself very lucky to have survived the situation with mostly just a bruised ego. But I will always feel guilty. If Stephen had hurt someone else, I could have prevented it by speaking up.

I wanted to report it so bad. I wanted to make sure it didn’t happen to anyone else. But I was terrified for my job and this opportunity I was given in the DCP. I would have had to admit to drinking underage which could have terminated me from the program. People get terminated for less all the time. So I kept my mouth shut.

Months later, while at work I was pulled aside by a manager during my shift. The next thing I know I was being escorted to Disneyland Secret Security. There I saw with my female location manager, and two men from security. They asked me if I knew why I was there. There was a lump in my throat. I cried.

While I didn’t get in trouble, and they let the underage drinking slide, I could feel judgment. I didn’t report my attempted attack. My only guess is that Stephen assaulted or attempted to prey on another innocent woman. Which I will always feel guilty about. I don’t know what occurred. My only assumption is that my name was dragged up during an internal investigation of another situation.

I thought having my location manager in the room while I discussed sensitive material was heinous. My location manager now had the perception of me as a girl who breaks the rules and accepts pills from strangers.

For the rest of my time at Disney, I never received marks on my record, verbal or written warnings, from anyone other than this specific manager.

I could not progress within the company and apply for lead, trainer, or cross-train because of the marks against me from this manager. While she told me “you’re a badass” for surviving the attempted attack, I could sense that she did not actually feel this way.

Things rolled downhill very quickly. I had to screenshot messages, block Stephen on Facebook, and find a way to block his texts. “You’re a piece of work,” he told me. He accused me of lying and would have taken his vile lies to the grave, I’m sure. But I know what he said. And I’m sure he does too.

I don’t know what happened to Stephen. I know he did not finish our program duration. I know that I finished the program with no friends, and very few people who even believed me.

I consider myself very lucky to have survived the situation with mostly just a bruised ego, but I will always feel guilty. If Stephen had hurt someone else, I could have prevented it by speaking up. Within a society with such strong rape culture, I knew that had I spoken up and mentioned underage drinking  —  it could have ruined my opportunities. I guess the joke is on me  —  because it ruined opportunities anyway and also probably put someone else in harms way. And it comes full circle to me blaming myself.

But life doesn’t work out or sort into clean lines and boxes. For me, the DCP was an unsafe environment. And I became acutely aware of how unforgiving rape culture really is.

My inboxes have received anonymous messages from others who’ve faced sexual harassment or assault working at Disney that went unresolved.

If you are, or were a Disney Cast Member  —  please consider taking this anonymous survey. Maybe we can have something tangible that shows how unsafe Cast Members can feel in their own workplace.

This post originally appeared on Medium and has been republished here with permission.

This story also appeared on Mamamia. More from Mamamia:

I Was Almost Raped — And When I Spoke Out, Ended Up With Zero Friends.
Caitlín Eagen