How To Overcome The Feeling Of Rejection 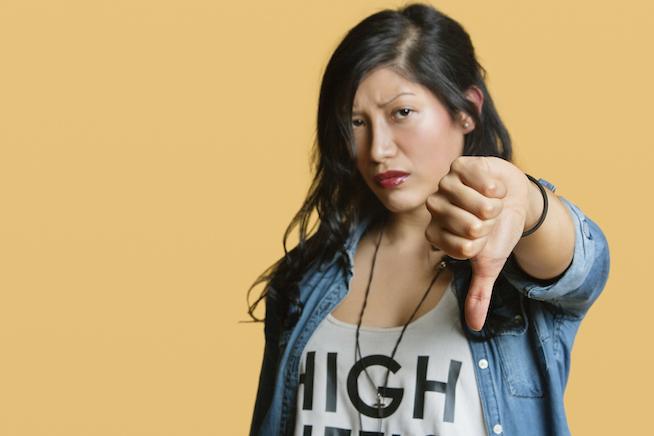 Rejection happens to everyone, in some way: Your kindergarten crush who called you gross, someone you love rejecting your identity, losing a job or a lover. For actors like me, it’s part of the job — but even then, rejection is never easy; the parts of the brain that respond to rejection are the same areas activated by physical pain.

What if there were a way to train our brains to flip the tables on rejection, a way to overcome pain response? Something slightly more tangible than “positive thinking” and slightly less terrifying than, say, swimming with sharks — something we could actually do?

Good news! There are plenty of tips (and even a new game!) to overcome the fear and pain of rejection, but it takes some Olympic-quality mental gymnastics to keep your chin up when life knocks you down. Are you ready? Here are some DIY strategies to retrain your brain to overcome rejection:

It may sound counterintuitive, but one of the best ways to move on from rejection is to first lean in and let yourself respond emotionally. If you’re anything like me, your go-to survival strategy is probably to dismiss and undermine your own feelings in order to make it easier for yourself to “tough it out” or “move on.”

Your pain after rejection is legitimate.

There’s a theory that our pain response to rejection was probably a way to help us survive in the caveman days, a hard-wired warning mechanism alerting us that we needed to change our behavior to find acceptance with the other humans; no one wanted to be left alone with the saber tooth tigers. Nowadays, scientists studying the brain explain “...that experiences of social rejection, when elicited powerfully enough, recruit brain regions involved in both the affective and sensory components of physical pain.”

In other words, when you’re rejected, your brain freaks out — so much so, that taking a Tylenol has actually been shown to soften emotional anguish after rejection. Crazy! That’s how real your feelings are! How’s that for validation?

You’re not weak; you’re human. So have a human reaction to rejection. Ignoring, undermining, or dismissing your feelings — or losing yourself in them — will make the pain worse. That’s where rejection ends and self-destruction begins.

Trite as it sounds, it’s true: rejection is usually not personal. “Fit and circumstance” are more likely to blame, according to Winch on TED. One of my favorite columnists, Secret Agent Man of Backstage, agrees. He explains to his audience of discouraged actors, “Most rejections aren’t about you ... maybe you’re too young for the part. Or too old. It could be anything, but I’ll tell you what it’s not. It’s not you.“

Dear Reader, I realize you’re probably not an actor, but this applies to you. Think about it: a huge part of moving on after a rejection (after you feel miserable for a bit) is learning to accept the agency and choices of the other people involved — and understanding that’s not about you. It’s not your fault. You don’t suck. Someone else made a choice and that is their right. Would you really want to live in a world where they didn’t have that right?

This post-rejection survival strategy is exactly as simple as it sounds: have somewhere to be. I’m again stealing actor wisdom from Ace Your Audition and translating it for you; one of the ways I spruce up my sense of control and self-esteem after a rejection is to schedule something else. Go meet a friend, see a movie, go to a class, or the gym. The point is, give yourself the gift of somewhere to be. Shift focus away from rejection and onto something you can legitimately look forward to, become absorbed in, and enjoy. Remind yourself that you are valued and you do belong — somewhere.

You have somewhere to be.

Winch explained to TED, “Rejection destabilizes our need to belong, leaving us feeling unsettled and socially untethered. Therefore, we need to remind ourselves that we’re appreciated and loved so we can feel more connected and grounded.“

Self-esteem can be a whole other journey, but it’s important to rebuild your mojo after rejection. Not sure how? Write yourself up!

Psychologist John M. Grohol on PsychCentral recommends taking a “self-esteem inventory” by making yourself write a list of 10 of your strengths — and 10 weaknesses. It helps us understand that we’re just as capable of finding good things about ourselves as bad. Also, try Winch’s TED recommendation: write a list of five positive personal qualities, pick one, and then write a paragraph about why that quality is important to you — and how it might be desirable to others.

Even if writing isn’t one of your strengths, you’ll wind up with something concrete and tangible from these exercises -- and you’ll also train your thinking to be self-supportive, realistic, and attuned.

5. Make rejection the goal with Rejection Therapy — the game!

Jason Comey was so terrified of rejection he decided to do something to overcome his fear. He invented Rejection Therapy, a game you can play. It’s easy: “You must be rejected by another person at least once, every single day.” Even I can do that! It worked for Comey, who found himself transformed by this self-challenge. He told NPR: "I was able to approach people, because what are you gonna do, reject me? Great! … You're going to feel great after, you're going to feel like, 'Wow. I disobeyed fear.'"

NPR noted that Rejection Therapy actually utilizes exposure therapy, where “you force yourself to be exposed to exactly the thing you fear, and eventually you recognize that the thing you fear isn't hurting you.”

If you make rejection your goal, can it actually become fun — like a real life treasure hunt? Only one way to find out...

While there’s no way around the fact that rejection hurts and is unavoidable ( due to reality), that doesn’t mean it has to knock us flat. And if these ideas don’t help, there’s always my personal favorite ace in the hole: actual therapy. If you find yourself crushed by rejection, know there are tools that can help us figure out how to keep on keeping on.

If you like this article, please share it! Your clicks keep us alive!
Tags
self-care
rejection
science
mental health