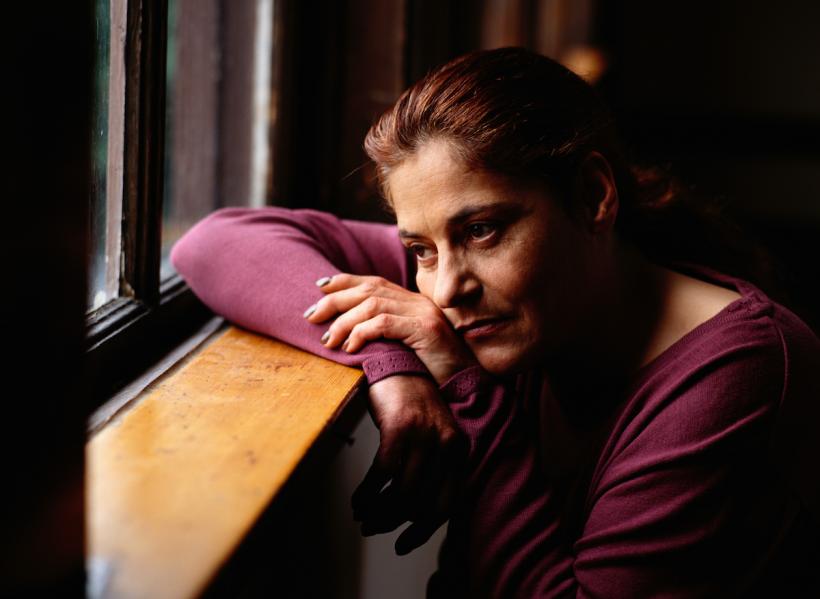 I brought up other instances the other women had shared with me about the double standards we face at the halfway house. Image: Thinkstock.

Letters From The Inside is an ongoing series featuring Amber Batts, who was convicted of sex trafficking in Alaska, and sentenced to 5 years in prison.

I have been in the halfway house now for over two months.

It has gone by quickly. I work at Denny’s, as a server. I sleep. I look out the window with my other roommates.

I am in a 4-bunk apartment. I have three roommates: a drug dealer,an alcohol importer, and someone who's in for a felony DWI (driving while intoxicated). If we wanted to, we could be quite the enterprising posse.

We are all so very different, but each of our strengths support where the other has a weakness. We are supportive, usually kind, and two of us cook some kick ass meals. (I am not one of them.) Our apartment is spacious, and we keep it clean.

It’s the nicest there is, for the minority that we are: women.

You do the math.

Until recently, I had not experienced any adverse issues at the halfway house. I know a few other women that received write-ups for minor things, like talking to the men or getting off the bus at the wrong set. I heard from others about verbal warnings for the same things.

So, not until I received a verbal warning from the COS (Chief of Security) did I realize the full extent of the double standards to which women here were held.

It all started one day when I had signed out to go to work. I waited in the visiting room for the allotted time I could head out the door to the bus.

While I was waiting, two older gentlemen were called down for UA’s [urine tests] and told to sit in the visiting room as well. While there, one of the men, who also works at a restaurant, asked how Denny’s fared for the Easter rush.

After a brief conversation about work and the economy, I was called into the Security office by the COS.

This is how the discussion went:

“Batts, why you talking to the men?”

“We were talking about work, about restaurant stuff.”

“What is the policy about talking to the men?”

“OK. I am giving you a verbal warning. Don’t talk to the men.”

“Really? OK. Where would you like me to sit to wait — because I am not going back in there and getting a write-up.”

“Wait in the conference room.”

So, I sat and waited in the conference room, fuming a bit, because I knew I hadn’t done anything that deserved a verbal.

The conference room was a part of the Security Office; I was curious to see if the COS would give either of the men verbal warnings. I gave it 3 minutes and stood up to fill out a cop-out* to my case manager.

I would like to speak to you as soon as possible about the discrimination I am facing here at Glenwood Center because I am a woman.

I turned the cop-out in to the Security office window, where the COS received it and read it quickly (per policy, they aren’t supposed to read anything not addressed to them).

I heard her snicker to the other two security staff. “Oh, she’s a whiner.”

I left to catch the bus to work, grateful to be out of there. I didn’t return until 10 that evening. I showered and went to bed.

The next morning, I was called down to talk to the director and my case manager. I told them exactly what happened and was assured it would be dealt with. I brought up other instances the other women had shared with me about the double standards we face at the halfway house. There were many that had felt disillusioned and frustrated for some time.

Their response? “They [women at Glenwood center] need to bring up these issues as they arise, as they happen to each individual, so we can be aware of this. It isn’t OK for you to address without the specifics. We need to know who, where, and when, in order to address these issues.”

Since this happened, what I fear is retaliation has taken place. I could be wrong. I have been wrong before, and I am bound to be wrong again.

So, I thought I would share the timeline I've drawn up. You can come to your own conclusions.

March 28 — Given the verbal from COS regarding communicating with the men.

March 30 — Pass denied by case manager. Casey was not acceptable to be my “sponsor” for a pass due to a suspended imposition of sentence some years ago.

Note: Casey was approved for visiting while I was at Hiland Correctional Center and holds power of attorney over my household responsibilities (banking, mortgage) and power of attorney (POA) over my daughter as well.

March 31 — First funds request I have ever done, the one I had turned in a few days earlier, was denied. Was told to fix and return by 8 am next day. Returned with actual amount listed on the restitution amount, rather than 20% listed. Denied as LATE by case manager.

April 1 — PO responds to Casey clarification request. States wants paperwork showing legal guardianship over daughter before I can have any contact with Casey.

April 4 — Contacted PO and was told once a felon, always a felon. Given a memo by case manager asking if D.F. (my friend) had guardianship over my daughter.

Given a NO CONTACT ORDER upon return from work (1:40 am) regarding D.F. not being able to bring daughter to visit or on passes; was told POA is invalid for visiting and pass purposes.

April 5 — Director said it would take longer to file guardianship papers in court than I would probably be at the halfway house. Told by the director she was surprised I wasn’t on electronic monitoring.

(By the way, I had just had a pass with my daughter and D.F. the Sunday before all of this occurred, and D.F. was able to bring daughter in the visit regularly with the POA on record.)

If you ever feel halfway houses are an easy way to do time — or that they're a waste of money that don’t do anything to deter the criminal from offending again, you should know that numerous inmates feel it is easier to go back to jail than it is to deal with the little rules and frustrations many halfway houses have ingrained in their milieu.

*A cop-out is a “request for interview” or a form of written communication.