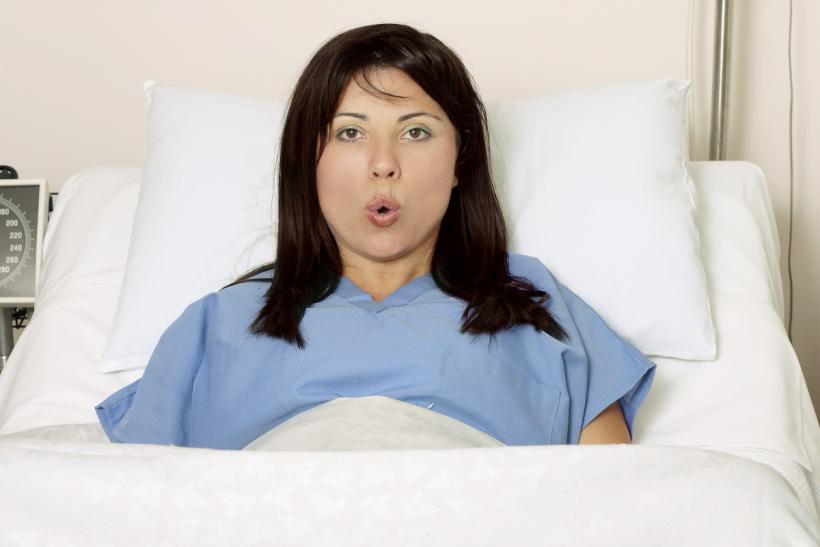 My epidural made me stop wanting to die. Image: Thinkstock.

Getting that epidural was one of the scariest moments of the process of getting that baby out of me. Having it in, though, was literally the best thing.

“Should I get an epidural?”

If you are pregnant, and preparing to birth your beautiful child into this beautiful world (congratulations, by the way!) this might be a question you are asking yourself.

It turns out, there is no shortage of opinions on the way that pregnant people should give birth. Folks are quick to share their feelings about birth with you, regardless of how well they know you, or whether or not they have personal or professional experience with birth.

One person just finished watching The Business Of Being Born and simply cannot stop quoting it at you, while another person thinks doctor always knows best and anything other than a fully medicated hospital birth is irresponsible.

And then there are the folks who cannot fathom why a birthing parent might not want pain medication — unless, that is, they’re trying to be a hero.

The reality is that birth is intense, and it is a moment of life that encompasses so many different things.

It is, at once, a normal and natural function of the human body that is usually safe (these days, anyway), and a moment of life that can easily turn dangerous and deadly.

So when I read the recent Jessi Klein’s New York Times piece, “Get The Epidural,” I can see where she’s coming from, to some extent.

Of course she has big opinions about giving birth, and especially about her own birth — we all do!

And if you look at the history of birth, you do see a lot of self-sacrifice. Women (and the NYT piece assumes all birthing people are women, even though trans people exist and they do in fact sometimes give birth) were once denied pain meds during childbirth. Not because those pain meds were considered unsafe, but because pain in childbirth was punishment for the sins of Eve, obviously, so interfering in that pain was wrong!

My epidural made me stop wanting to die. That was, and continues to be, a very good thing.

And while I don’t, to my knowledge, know any living people who believe such a ridiculous idea today, attitudes of female self-sacrifice remain in our culture. In the world of online parenting writing, for example (a world in which I am thoroughly immersed!) a pretty high ratio of what’s out there amounts to “being a mom is the hardest, but that’s just the way it is.”

We laugh at, and to some degree celebrate, the fact that we are often sleep deprived, at our wits’ end, and unhappy.

And, for some of us, that celebration of hardship starts with birth. We compare birth stories like war stories. Twelve hours of labor, 32 hours of labor, three hours of pushing, we fall into the trap of trying to one-up each other.

So yes, I can see why, to a parent-to-be who is enthusiastically anticipating pain relief, the refusal of an epidural might seem like a bit of a hero complex. And maybe for some people it is!

But it’s none of your goddamn business.

The fact is, there are many legitimate reasons someone might want to avoid getting an epidural besides a desire to be a hero. Maybe the person is terrified of needles! Maybe the person wants to avoid the risks associated with epidurals (and there are some risks, though the risk factor isn’t terribly high). Maybe the person feels that being able to move around during labor is a higher priority to them than pain relief! Maybe they don’t want to give birth in a medicalized environment in the first place.

In my case, I had been fascinated with birth for literally a decade before I had an opportunity to give birth. I was excited about doing it, and I wanted to experience it fully for whatever it was, and for me that meant no drugs. It also meant that I wanted to give birth in my home (with an excellent midwife and a hospital backup plan because sometimes bodies do weird shit).

My body did weird shit. Five days after my labor began, and 24 hours after my water broke, I found myself in a hospital corridor talking to a kind nurse who’d asked earlier, “Did you want to maybe think about an epidural?” in the sweetest way possible.

By that point, I either wanted to talk about an epidural or death, and I really didn’t care which.

I got the epidural.

Getting that epidural was one of the scariest moments of the process of getting that baby out of me. Having it in, though, was literally the best thing. I am unapologetic about that. I want to write a sonnet about that epidural. I cannot remember the anesthesiologists name, but if I could, I would have sent him a card and flowers on my son’s birthday. You, sir, if you are reading this, are a national treasure.

My epidural made me stop wanting to die. That was, and continues to be, a very good thing.

So, should you get an epidural? I have no freaking idea.

For some birthing people, an epidural helps them loosen up and get things (like having a baby) done! For others, it’s an intimidating medical procedure that they’d rather avoid.

Much to my surprise, I turned out to be a little from both columns. Personally, I’m glad I got the epidural. But that does not make me qualified to decide what anyone else needs, or should do, for their own birth.

Get the epidural if you want it or need it.

And if someone gives you shit for getting the epidural, that person is a jerk, and you have my permission to tell them so!

But also, if someone gives you shit for choosing not to get the epidural, that person is a jerk, and you have my permission to tell them so, too!

Getting a baby out of your body is pretty challenging, and no one should judge you for doing it the way that works for you and your kid.

If you like this article, please share it! Your clicks keep us alive!
Tags
policing pregnant people
The Business Of Being Born
birth
labor
epidural
pain
natural childbirth
c-section
shame
traumatic birth