Will My Anxious Child Ever Have Friends? 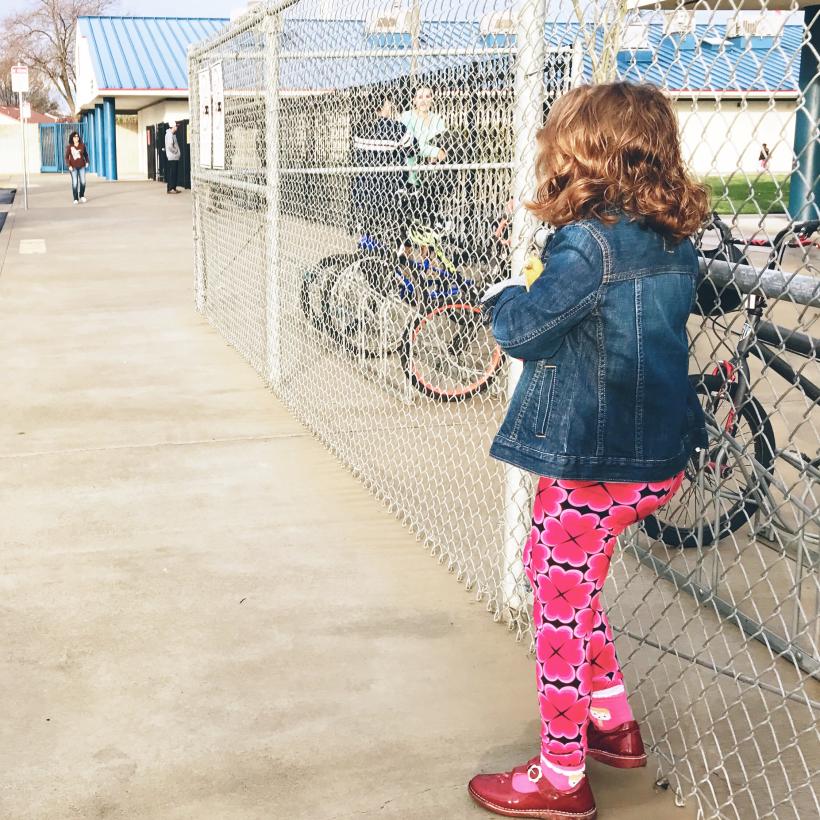 Ella has been in school 104 days. Her school marked the 100th day with a party; 100 cookies, 100 balloons, 100 kids dressed up like they are 100-years-old. We marked the 100th day by celebrating Ella’s willingness to walk into her classroom as part of the class, instead of sneak in at the end of the line.

Ella is my daughter. She’s 6-years-old. She should be bouncing off to her kindergarten classroom every morning with the 21 other 5- and 6-year-olds in her class — running around the play structure, waiting in line for her turn on the swings. Instead of bouncing, Ella just stands — against a wall, in a corner, by the fence.

In 104 days, she has progressed from wouldn’t step foot in the class or sit in a chair, to being at recess alone — well, almost. At 9:30 every day, I drive to the school to sit in the parking lot (about 50 feet from the playground she nevers goes to) and watch her like some kind of creepy stalker helicopter mom. I don’t do this because I want to; I do this because she insists.

She’s just not ready to do it without me near. She peeks through the chain-link at me, a quick check to verify that I showed up, as promised, then she’s back to being alone.

A few weeks ago, before she tried recess (mostly) alone, I was standing with her near the classroom and a tiny girl with black pigtails and pink boots approached us. Pigtail Boot Girl told Ella she liked her shoes (she was wearing the shiny red ones that day); Ella hid. 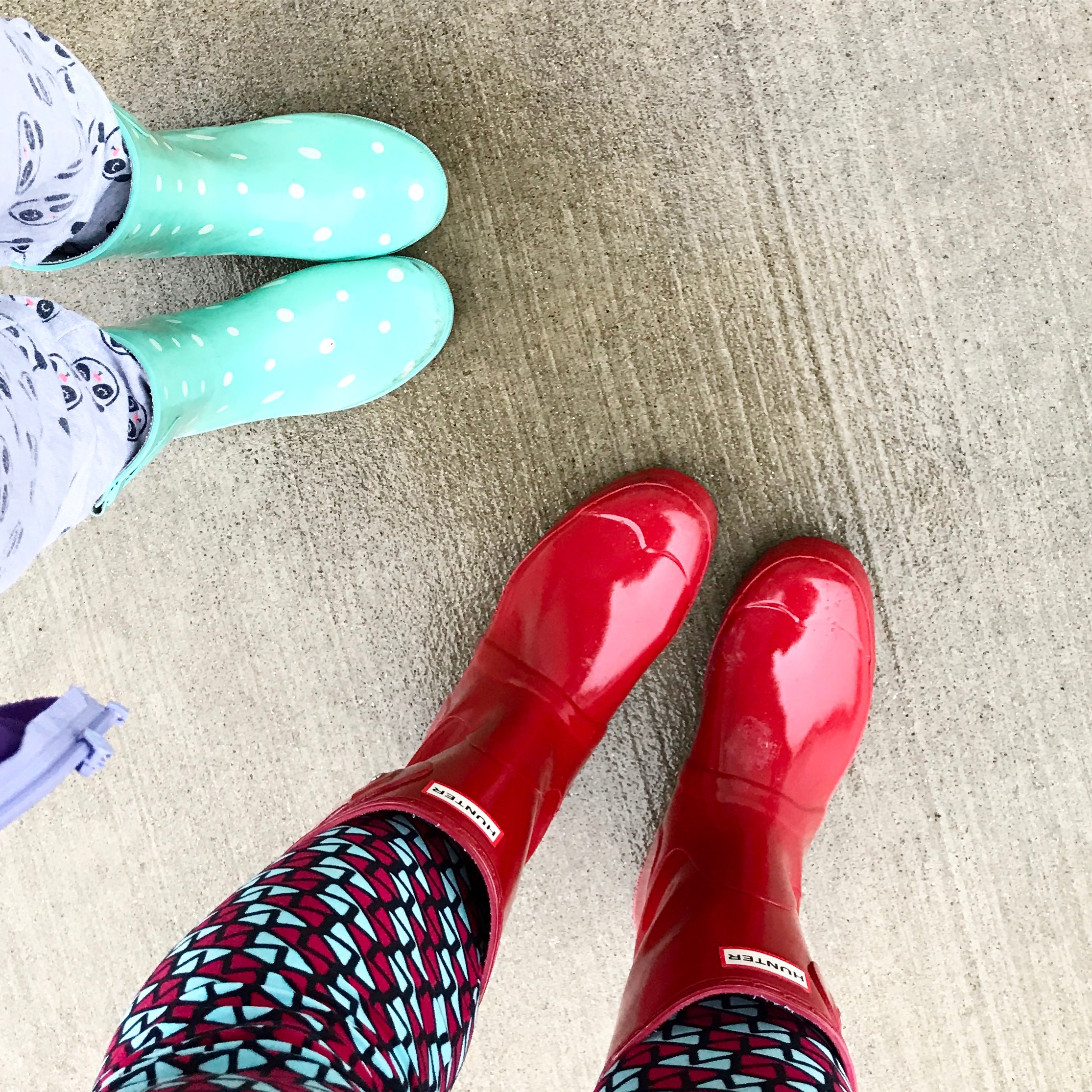 Hiding is Ella’s coping mechanism when being alone isn’t feasible.

After continued prodding (and continued hiding on Ella’s part), Pigtail Boot Girl asked what most of the 80 or so kinder kids are probably thinking, “What’s wrong with her?”

What is wrong with her?

One of the little boys from Ella’s class — we’ll call him Dylan — left his nearby soccer game to join our conversation. Most kindergarteners can insert themselves in any situation, I've learned.

“Her brain just works different than ours,” he says, then adds, with intensity, “OK?”

Intense Dylan with the spiky hair and blue Nikes, sits at Ella’s table (the ‘green’ one) and periodically reminds everyone he’s Mexican.

Dylan says, “Her brain just works different than ours. OK?” and disappears.

Leave it to a 5-year-old to drop some truth and then carry on with his soccer game like he didn’t just sum up our entire existence in eight words.

I’m thankful for Mexican-Soccer-Playing-Spiky-Hair-Dylan. I don’t know who told him that Ella’s brain works “different,” or if he even really gets what “different” means. But I know that on Tuesday, Dylan told Pigtail Boot Girl that Ella was different, that he did it in a way that just made it seem like a fact and not a defect, that he then continued to play soccer and tell other people that he’s Mexican.

Pigtail Boot Girl took Dylan’s information, combined with Ella’s clear indication that she didn't want to be bothered, and went on her way. I haven’t talked to her since then. Neither has Ella. The idea of trying to be friends with someone “different” might be more than a 5-year-old is meant to handle.

I’ve heard from other people (and the ultimate resource, the Internet) that kids with Selective Mutism will sometimes make one close friend who will speak for them when they cannot. Aside from Did-You-Know-I’m-Mexican Dylan, I haven’t seen any evidence of that.

What I see is Ella standing alone.

I see a lot of kids approaching her: noisy, hyperactive kids eating donuts at recess and bouncing off the play structure, trying to interact, and then giving up when she turns them away. I wonder, will there ever be one who won’t give up.

There is one girl in Ella’s class who might persist, if Ella would allow it. Lia is blonde and loud and told me last week that I looked like I was “getting pretty chubby.” Lia is annoying. Also, Lia is persistent (which is part of her being annoying). She talks to Ella every day, probably mostly because Ella is mysterious to her, maybe at least in part because she likes to comment on my clothing and/or increasing chubbiness.

So far though, Lia is the only kinder kid who hasn’t given up on Ella entirely.

This week, Ella’s home writing assignment was to share two things she loves about her best friend. I know though, that Ella doesn’t have a best friend, so this assignment is not only impossible, but painful, too.

When her big sister, Kelsey, sits with her to complete it, Ella says Lia is her best friend. When Kelsey asks why, Ella says, “because she talks to me.”

This makes me happy, and crushes me, all at once. She has a “best friend.” Her definition of “best friend” is loosely defined as someone who talks to her. I think about Ella calling Lia her best friend and I wonder who Lia wrote about.

I’ve never heard Ella speak to Lia, or anyone in her class, outside the teacher. The teacher says she participates, she’s improving. I wonder if this isn’t just a thing teachers say to keep parents from freaking out. I wonder if Lia’s parents worry about her having friends. If I had to guess, I’d say no — because Lia is persistent. Persistent kids won’t be left alone by the door for 20 minutes every morning.

Ella is not persistent — at least not at school. I don't know what this means for her today. I don't know what this means for her in the future, as she grows and expands and can't always stand alone. It hurts to be the mom watching from outside the fence, but I'll stay there until she's ready for me to go, whenever that it. I'll watch her stand alone and feel the lump in my throat that arises every time I think of her struggling to do what every other kid does everyday without fanfare. I hope someday I'll watch her play with Lia.

If you like this article, please share it! Your clicks keep us alive!
Tags
parenting
selective mutism
Special Needs
school
recess
friendships
kindergarten