The Obesity Code: Your Fat Is Not Your Fault. 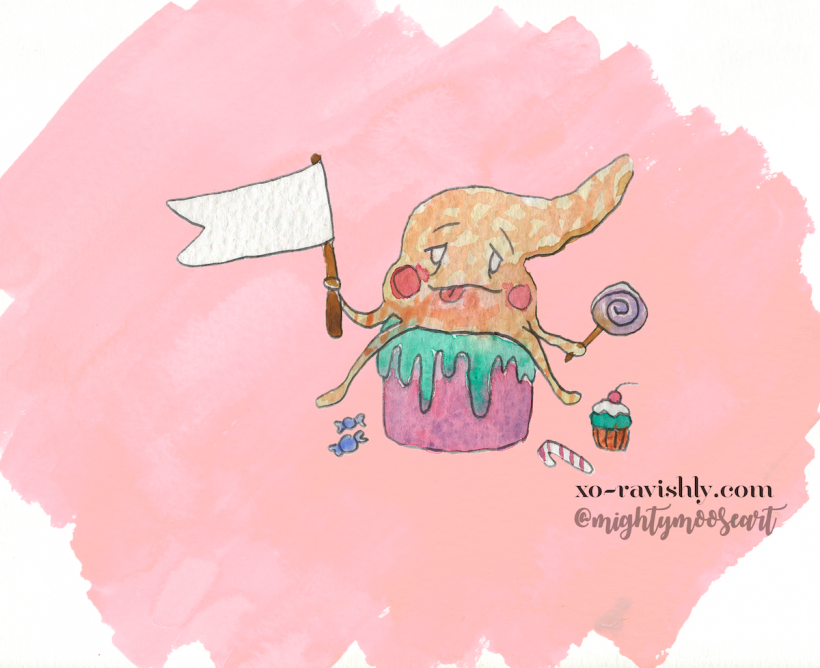 If you are in ED recovery, please be mindful of your health as you read this. The dietary changes discussed in this article should not be attempted by anyone who has suffered from at eating disorder.

If you’re fat, and you believe your fat is not your fault, you're in the minority; you're also correct — at least partly.

Don’t tell the internet this, because information like this — true and also truly groundbreaking — makes people burn with the fiery hatred of a thousand suns, and then take that white hot heat to Facebook/Twitter/their only occasionally read blog.

Ask me how I know.

It’s pretty infrequent that a book blows my mind. I’ve read a lot of books; it takes more than just well-structured sentences and a command of the English language to excite me. Sometimes, when my current reading list bores me, I take to Amazon or Powell's front page (I wish I could say it was always Powell’s, but I’m a slave to capitalism) and browse current favorites.

That must be how I found The Obesity Code by Jason Fung. I wouldn’t have sought it out; most books like this are utter garbage and not worth my $18.99, even if they have same-day prime shipping.

Here’s the dilemma I find myself facing pretty much every time I think about fat/weight/diabetes/bullshit sold to us by the media/mostly Weight Watchers: What is true? For every scientific study around weight and health proving A, there is a scientific study proving whatever is the opposite of A — let’s call it B.

The A people all say to the B people, “SEE. I told you so and I have the data of a thousand tiny mice heart attacks to prove it.” The B people say to the A people, “I see your mice and raise you a thousand medium-sized monkey heart attacks.” The rest of us who fall somewhere in the middle between A and B, and are really just trying to get to the bottom of the thing, throw up our hands and cry because we realize that the answer to life’s problems is to eat a cookie while on a treadmill.

But what if I told you that you’ve probably exhausted your pancreas? What if I told you that the way you’ve been taught to eat, the way even our trusted doctors have taught us to eat, isn’t helping us? That it is actually making us fatter and sicker and more desperate for solutions that will only compound all of this nonsense?

Let’s review some of the things we’ve learned about eating:

The '70s and early '80s taught us all (well, those of us who were alive) that fat was bad and carbs were good. The companies that fed us — Nabisco, Kellogg's, Kraft — started making loads of sugar-y carb-y things and labeling them as “FAT FREEEEE!!!!” like fat-free is some sort of grocery badge of honor.

We know now that all of fat-free nonsense was a bullshit sandwich that we devoured while we filled our cupboards with things masquerading as “food”, in a largely failed effort to get our fat under control.

Would it surprise you to learn that the “weight problem” in America really took off right about the time our government decided that we should be eating less fat?

Correlation does not equal causation, I know. But it’s a pretty compelling piece of evidence either way.

Would you think I was conspiring against the fluffy syrupy goodness that is a pancake paired beautifully, married in brunch-y bliss, with a mimosa at Sunday brunch if I told you that Kellogg made up that whole thing about breakfast? Because I love pancakes as much as anyone has ever loved pancakes, but Kellogg? He was just a sexually repressed prude who exaggerated the importance of breakfast because he thought it would suppress sexual desire/stop people from getting frisky with themselves.

If only Kellogg knew what was coming for him.

What if I told you that consumption of fat doesn’t not necessarily equal the accumulation of fat? Science and humans have proved this. (This does not refer to Oreo fat. That’s another thing entirely.)

What if I told you that everything you’ve been taught, every extreme effort you’ve gone to has only made you fatter?

That’s what I’m telling you now.

Your pancreas works all the time, dumping insulin into your body every time you eat a muffin or whatever. 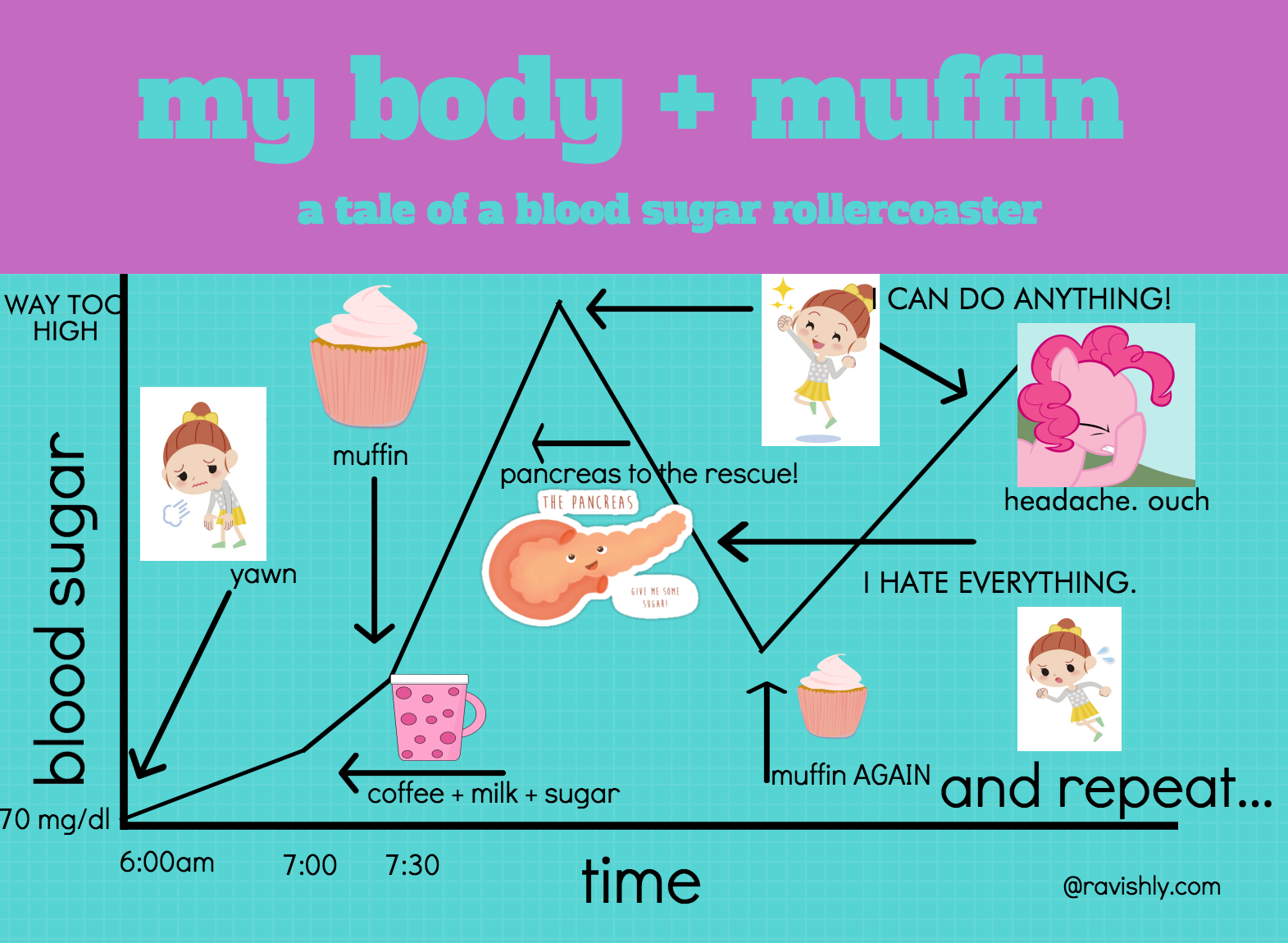 Ladies and Gentlemen (but most Ladies), nephrologist (which is fancy for guy-who-deals-with-kidneys [people with diabetes problems often have kidney problems]) Dr. Jason Fung:

“A recent study suggests that 75 per cent of the weight-loss response in obesity is predicted by insulin levels. Not willpower. Not caloric intake. Not peer support or peer pressure. Not exercise. Just insulin.”

Let me sum it up for you real tidy like. I won't include all the science-y links because I think what you most care about is the information, and if you're reading this you hopefully trust that I'm not making shit up:

You are exhausting your pancreas. We are all exhausting our pancreas by feeding it all day long. When we've exhausted our pancreases thoroughly, and flooded our blood with insulin, we can, and often will, develop insulin resistance. Once that has happened, and once your doctor is done freaking out and giving you low-carb food, you get more insulin by way of injection.

HOLD UP. You've developed a resistance to insulin and we've just responded by giving you more.

Does anyone but me see the critical flaw in this treatment plan?

If you were allergic to shellfish, we would not give you more shellfish and just hope you didn't die of anaphylaxis. "Here's a lobster! Don't DIE!" That would be not only stupid, but negligent.

I know if you've gotten this far, you are probably thinking, "Jesus, woman, what's the answer?"

The answer is intermittent fasting.

Before you freak out (I freaked out, so I think that's an expected response), pause to think about fasting as a practice. Besides it being downright biblical, it makes sense. When you give your body and your pancreas a rest from their frantic production of insulin and other hormones, it acts as a sort of reset. Instead of your pancreas working OT for you all the time, it gets to sleep when you do, and wake up whenever you eat your first meal.

Dr. Fung has a number of scientifically legitimate studies (involving actual humans) and a practice that puts his money where is mouth is.

How does all this play into our weight? And what is Leptin anyway?

It's very Science-y, but let me sum it up for you so this article isn't ten pages long: Leptin is your body's fullness signaler. It's produced by fat cells and tells your brain you've got enough fat stored to last the winter and should put down the sandwich. Insulin, which we know is produced and released in response to muffins, when chronically high, effectively shuts off your brain's ability to see the leptin. And yes, when your brain doesn't "see" the insulin, it doesn't know that you've had enough sandwich.

This happens again and again, and now we've got a cycle. Increased Insulin ⇒ inability for the brain to see Leptin ⇒ increased hunger ⇒ fat. The more insulin you have and the more body fat you have, the more your body thinks you're hungry. And I don't need to tell you the rest.

Great news, Joni. BUT HOW DO I FIX MY INSULIN?

The answer really is as simple as not eating all the time.

The answer is as cut and dry as letting your body do its own reset. Eat your food in a 8-10 hour window, don't restrict your calories, and the rest of the 14-16 hours, you rest, your pancreas rests. Your hormones reset, your insulin resistance resets (and ultimately you probably also lose weight, but what does it matter if the alternative is being chained to an insulin pump until you die).

I personally haven't done anything with this information except share it, because I am not about to trigger the monster that is my eating disorder. This admittedly isn't for everyone, because we are all different humans with different wants and needs and bodies. But I'm sharing this with you because it could quite literally save your life.

I'm sharing it with you for all the times you made to believe that you were gluttonous or lazy, and for all the times the world told you that your weight was your fault and if you just "ate less and moved more" you'd be thin. Because that is quite possibly a complete load of guilt-laden crap that is actually causing you way more harm than your weight itself.

If you like this article, please share it! Your clicks keep us alive!
Tags
pancreas
eating disorder
Food
diet culture
health
wellness
bodies