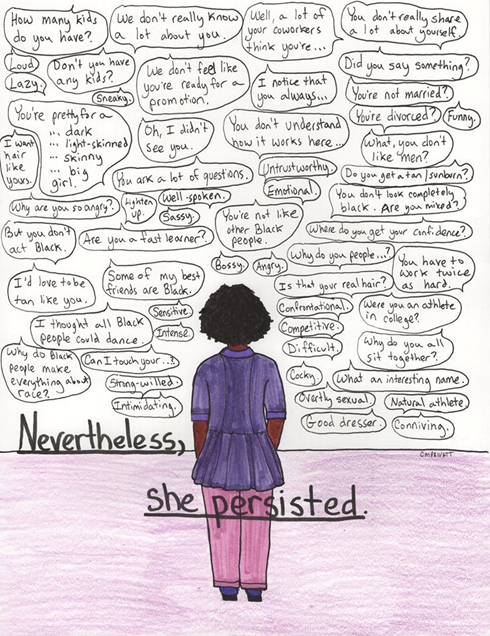 A few weeks ago, Senate Majority Leader Senate Mitch McConnell unwittingly coined this phrase. It was deeply felt and quickly claimed by women from coast to coast.

The phrase's impact and instant popularity were surely not what McConnell intended when he chose his words, as part of an explanation as to why Senator Elizabeth Warren had been silenced mid-speech while addressing the Senate. Warren had been reading a letter written by Coretta Scott King, widow of Martin Luther King, in opposition to the nomination of Jeff Sessions for a federal judgeship.

Warren was silenced at that moment. But this only helped her later gain a much wider platform from which to be heard. Thus, the power of “Nevertheless, she persisted” began to grow.

Women everywhere have been reminded of their own personal strength and resilience. From memes to t-shirts, tweets to tattoos, coffee mugs to original artwork, “Nevertheless, she persisted” has become the latest feminist battle cry. And it’s given an already existing group (women) a greater sense of unity and inspiration — the irony of it all is just one empowering aspect of the story.

ShaVonne Randolph, a single mom of two from Maryland, recently shared an inspiring post on Facebook. It featured her daughter Raven Matthews, a twenty-year-old Health Science major at The University of Maryland.

Randolph shared this photo of Raven and the following, proud mama, words: 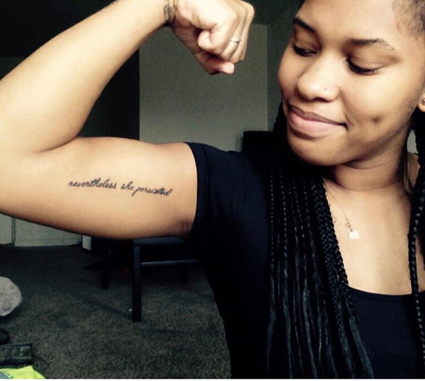 “Nevertheless, she persisted.......
- Was told that after transferring schools 10 times before 7th grade that she wouldn't get into the magnet program - accepted into Poolesville High School Humanities Program
- Was told "oh UMD is very competitive so you should apply to other schools" - accepted into UMD scholars program and the 9 other schools she applied for and will graduate debt free!!
- Was told "you shouldn't do sports because your asthma is too bad" - excelled in POMS, Cheerleading, Softball and Gymkana
- Was told kids from teen moms usually become teen moms themselves - almost 21 and NOT EVEN A SCARE!!
- Was told children from single parent households never succeed - read above!!
My daughter won't let anyone or anything STOP HER!! NEVERTHELESS, SHE PERSISTED!!!”

According to Raven, she felt an instant connection to the words “Nevertheless, she persisted.” She told Ravishly: “Once I heard the statement, I said, ‘That’s me!’” ShaVonne agreed. Raven is a determined young woman who doesn’t let obstacles or naysayers stand in her way. ShaVonne supported her daughter’s choice to get the quote tattooed on her arm and went with her to have it done.

Throughout her childhood, Raven had many assumptions made about her and limitations put upon her based on race, gender, and socioeconomic status. ShaVonne noted such attitudes toward her daughter even more so when they moved to a predominantly white neighborhood. She suggested neighbors made judgments about Raven, based on what they had seen on TV. ShaVonne explained: “When Raven was twelve, we moved to a predominantly white neighborhood and I guess the stigma of a black girl from a single parent household was what was read or seen on TV. Thank goodness Raven had one teacher who looked beyond the stereotype and saw how smart Raven was.”

But it wasn’t only white members of the community underestimating Raven. ShaVonne said: “Believe it or not it was both races!” 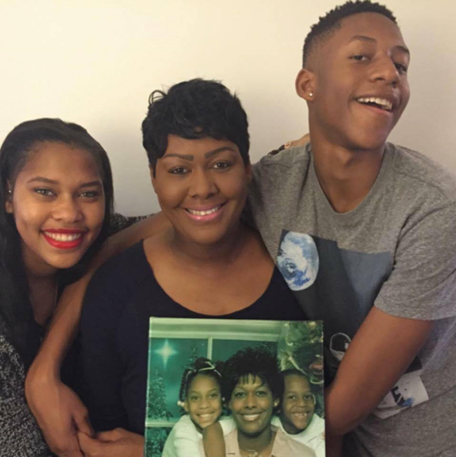 ShaVonne, whose 18-year-old son, Ryan, has enlisted in the Air Force (set to start boot camp later this month), has worked hard to raise her kids well. As a single mom, she often put herself last so her kids could have opportunities. And her dedication to her children has not gone unappreciated.

When we asked Raven what keeps her motivated to "persist," she responded: “My mom! She has sacrificed so much for my younger brother and me.”

As a former teen mom, ShaVonne Raymond persisted despite the obstacles and prejudice she faced along the way. And now, her two adult kids are both working successfully to achieve their goals.

We are honored to feature Raven Matthews as this week’s inspirational Lover & Fighter. You are a resilient and determined young woman, Raven, and your new tattoo will never let you forget that! Maybe next time, you should take your mom to get herself a matching one.

If you like this article, please share it! Your clicks keep us alive!
Tags
Nevertheless she persisted
Senator Elizabeth Warren
feminism
overcoming obstacles
inspiration