Relationships Aren't Built For Selfish People; If They're Doing These Things, Run! 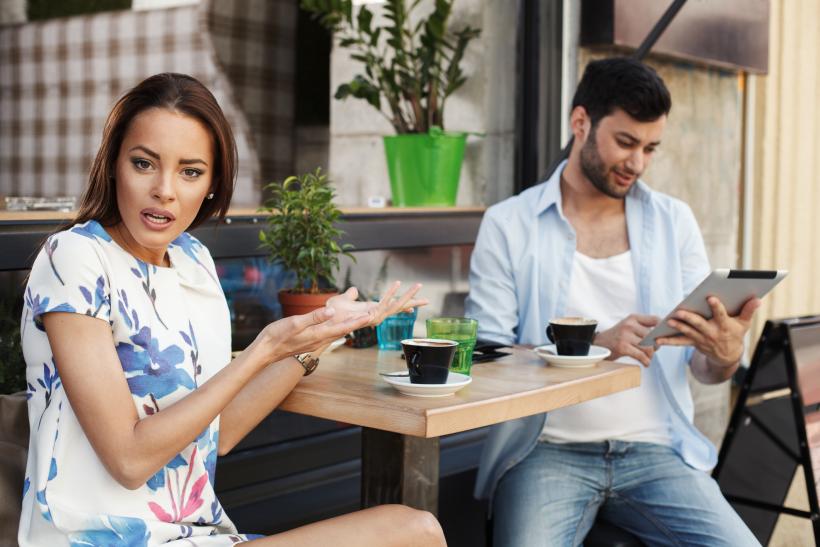 Do NOT ignore the signs of a selfish partner in a relationship.

There's a scene in Uptown Girls where Molly's ex approaches her wanting her back, but she refuses. "Ever since we met it's about what I'm doing wrong... but I’m not the one with the problem. You are, you and your selfishness. All you do is take. I’ve got nothing for you right now, so... maybe it’s time to start thinking about someone other than yourself.”

I saw this movie when I was a little girl, and little did I know that it would become my reality as an adult. It's like I stepped into the scene, but wasn't strong enough to read Molly’s lines. Instead, I waited until the guy walked away from me. I saw the end before we even started... but decided to give it a shot anyways.

Once my relationship with this selfish person ended, I surprisingly felt relief when I walked away from his apartment, almost like I just had a tapeworm extracted.

I was free again.

For months, I wasn't strong enough to remove him, even though deep down I knew having him with me was wrong. For a long time he would take what I not-so-jokingly termed “3-5 business days” to text me back. I was lucky to get a response in anything less than an eight-hour minimum lag time. Meanwhile, he would get mad at me if I took two hours to respond.

To see each other, he would have me commute an hour and a half, and then walk a mile to get to him. He only met me at the train station once, and it was because I asked him to, not because he offered. This guy picked the shows we watched, and the food we ate. He was selfish in all of the little ways, and it turns out, the big ones too.

Truth be told, I never fully felt comfortable being with him — ever. I couldn't talk to him after I had a bad day because I knew he would be too “busy” to hear about it or take the time to comfort me. I always had to run and ask my friends for advice before contacting him because I knew he was all for him, and never for anyone else.

Unfortunately, it took me some time to accept that relationships just don't work with selfish people.

In the end, this dude kept telling me how he cares about me. Yet, no matter how many times he repeated those words, I couldn't believe them once. He couldn't care about me. How could he possibly care about anyone? The only person a selfish person can ever truly care about is himself. To ask me to stay in his life, so he could “have his cake and eat it too” was the final confirmation that he was 110% team him.

This article is a nod to the leech I let suck my emotions dry, and a warning for anyone dating someone who exhibits these selfish ways.

Here are the red flags that you’re dating an inconsiderate partner, and should run while you still can!

1. They make you come to them.

They never try to find a compromise or meet somewhere in the middle. They want to do as little work as possible because if not, they are doing something selfless, which is not who they are. They don't want to inconvenience themselves for someone else. They will make you come to them, always.

2. They don't try and fix things that bother you.

If you tell your partner something makes you upset, he should make an effort to fix the problem so you won't get hurt again. A selfish person won't care about your feelings, and will keep hurting you.

3. They make plans on their schedule without giving any thought to yours.

In other words, they always do what's best and convenient for them, but never both of you as a unit. They let you know what they're doing at the last second because if something better pops up that's in their interest, they'll take that route instead. This is because they don't care about you, they care about them. And when you are around, they will still be doing their own thing.

For example, they will do an activity while you're there that they could have done on their own time like work out, shower, or fold laundry. They only pay attention to you when it strokes their ego, or makes them feel good. That also means they contact you when they feel like it. And when you ask for the bare minimum in return, it will be all too much for them to handle because considering anyone else's feelings is just NOT in their nature.

4. They are the masters of excuses.

They're “too busy” or “tired,” or didn't have their phone on them, aka they don't care to take two seconds to respond to you because doing so does not serve them. If you were to send them a naked picture, however, that person would respond right away because it works in their favor to do so — in order to get more from you.

You see, it's another opportunity for them to profit (unlike a real conversation where that person has to also give in return).

They will continue to take everything they can from you, whether that be consoling, attention, sex — anything and everything until you're gived out. The second you put your foot down on giving, they are already out the door. Because they aren’t built for compromise, and solutions when the only thing they see when looking out into the world... is their own reflection.

Once a selfish person has seen all you have to offer, or the relationship is coming to a point where they need to start giving, they will call it quits because it no longer serves their interests alone. When that happens, it's time for them to leave and become someone else's parasite.

If you like this article, please share it! Your clicks keep us alive!
Tags
Relationships
Sex
Love
advice
selfish partners
bad boyfriends