Ask Erin: Can I Ask My Boyfriend To Dump His Best Friend? 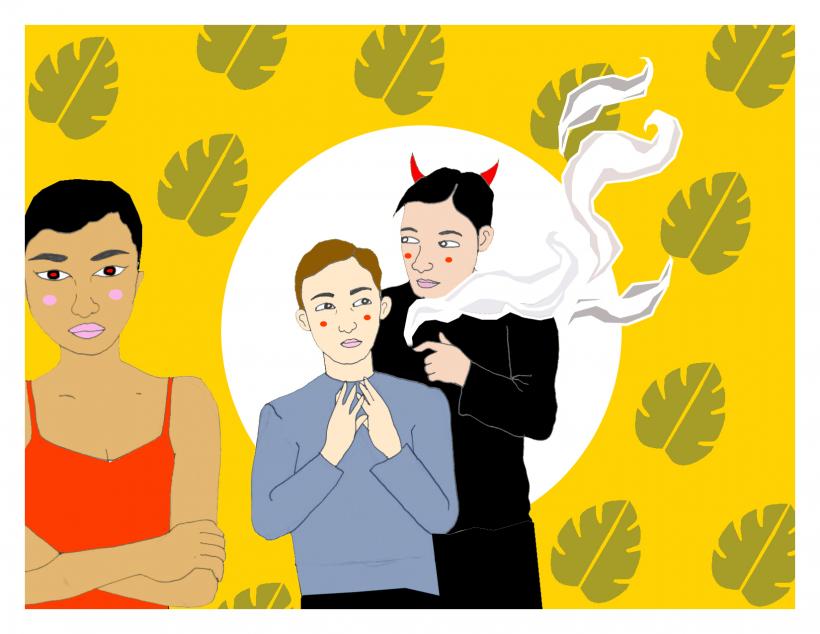 So last year I found out my boyfriend of nine years was having an emotional affair, sending texts to other girls he shouldn’t have, and generally being pretty douchey.

I found this out because I read texts between him and his male best friend talking about this stuff.

I know, a massive breach of privacy. To try to defend myself  — I was really suspicious because he was going out a lot more at night, staying late after work, never leaving his phone out of sight, and was being really cold with me. I tried to talk to him about my suspicions, but he would deny it and walk off. (He later admitted he was walking off so he could delete suspicious texts from other girls.)

Anyway, so I did read his texts with his best mate who I knew he would talk to if anything were going on. In the texts, the friend was joking about the situation and my boyfriend liking other girls, inviting my boyfriend to visit him to meet other girls, talking about them being single together, and even said: “haha imagine if your girlfriend read this.”

I was really hurt because I’d spent a lot of time with this best friend, gone on double dates with him, cooked him dinner, had him stay over at our house. I also have never prevented my boyfriend spending time with him whether its lads weekends away or nights out.

My boyfriend and I have done A LOT of work to repair the relationship, and I now trust him again. But I hate the fact he is still friends with this man because he clearly has no respect for me or our relationship. He hasn’t even asked my boyfriend how things are between us after the shit hit the fan.

Can I ask him to ditch this guy as a friend?

I feel for you. It’s a tough situation to have negative feelings about your partner’s best friend. But before I address your question, we need to look a little deeper.

You need to separate your anger towards your boyfriend from your anger towards his best friend. Of course, it hurts to know that his friend knew this information, cosigned it, and seemingly encouraged it. When I was in a relationship where my partner had cheated, I remember that feeling of finding out who had known. It burns. BUT…

Your boyfriend, not the friend, is the one who’d committed to you.

Although you said that you trust your boyfriend again and you’ve worked together to repair your relationship, I think there’s more work to do. The residual anger you have is being redirected at the best friend. I’m not saying this friend is a great guy, but he didn’t do these things to you.

You also mentioned that the friend hasn’t asked about your relationship — how it’s going. I’m not sure how you know that. I am assuming that he’s told you this.

Here is what I would do: Get real honest with yourself about any residual resentment or trust issues you have with your boyfriend. I am a big believer in clear and direct communication.

I think you need to talk with the best friend — a non-confrontational, but honest talk. It’s okay to tell the friend that it hurt to find out that he knew about the cheating and perhaps encouraged it. But don’t blame him for your boyfriend’s actions.

If you ask your boyfriend to dump his best friend, you’re likely not going to get the response that you want.

So if you decide to do that, you have to prepare yourself for how you will feel and what you will do if you don’t get what you want. I think that with a little compromise and a lot of direct, clear, calm communication, you can get to a place where you’ll be a bit more comfortable with him.

The information within Ask Erin should in no way be interpreted as medical advice because I’m not a medical professional. But I am here to help — to share with you the wisdom I’ve gained after years of making mistakes. If you have a question for me about relationships, addiction, dating, friendships, depression, parenting, sex, consent, what I’m watching, what I’m reading, Amblygonite, or anything at all, use the contact form below or email me at  askerin@ravishly.com. As always, your anonymity is golden. Lastly, I’m so excited to share with you my Ask Erin Self-Care Guide, free when you sign up for my weekly newsletter. xoxo

If you like this article, please share it! Your clicks keep us alive!
Tags
Ask Erin
relationship advice
infidelity
emotional affair
Trust