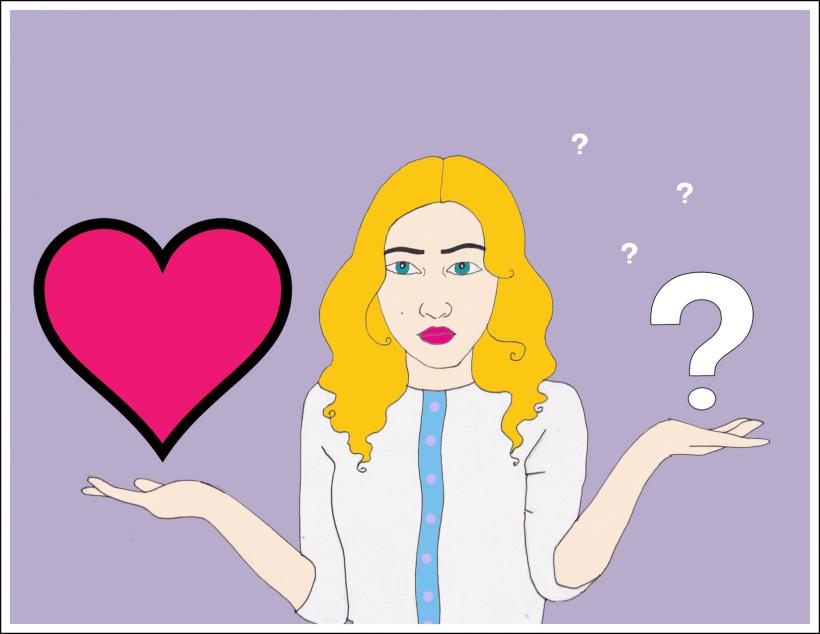 I’m a heterosexual cis woman and had been trying to figure out how I felt about him for a while because it didn’t feel entirely platonic. (Artwork: Tess Emily Rodriguez)

A few months ago, a trans masc friend with whom I’ve grown very close asked me whether I might be interested in dating. I’m a heterosexual cis woman and had been trying to figure out how I felt about him for a while because it didn’t feel entirely platonic.

I had enough uncertainties that I initially told him no — it seemed disrespectful to our existing relationship to move forward if I wasn’t all in.

There are many practical reasons why that’s a sensible choice, including that he lives in another city. But I kept having doubts about whether I was doing the right thing. We’ve continued to talk about it over the past several weeks and recently decided to start seeing where things go.

I’m curious to see what might happen between us and really relieved to have stopped saying no when that’s not where my heart is. But I’m confused by the fact that I don’t know where this falls on a few vectors that normally line up clearly for me: emotional intimacy, romantic attraction, and physical attraction. I feel very emotionally close to him, possible romantic interest, and uncertain of whether or not I’m physically attracted.

A healthy and strong physical connection in a relationship is really important to me. But to make that more complicated, I have a lot of past sexual trauma and have taken the last six years (!) off from dating to work on being less afraid of men, sex, and physical intimacy. I’ve been working with a great therapist for the last year+ and am making real progress.

He and I have very open communication and have talked about all of these concerns, including my uncertainty around whether or not I’m physically attracted to him. We had a super honest chat about it, and he understands and still wants to test things out. But I’m still so confused! I’m already weird about my own body and am worried I’d be weird about his body too in ways that could be damaging to his sense of self and our friendship.

He, like everyone, deserves to have his body and gender celebrated as a core part of who he is.

That’s true in general, but especially in a romantic relationship. I respect, trust, and am drawn to this person, and am really afraid to be harmful. I know that people inadvertently hurt each other all the time and that it’s part of the risk of getting close to someone. But this feels different. I’m scared of the possibility that a potential rejection might be on the basis of gender, reinforcing dysphoria and just generally feeling shitty to both of us.

(Which: I’m not totally sure whether having a genital preference makes me inherently transphobic??? I don’t feel like it does but received feedback from one friend who implied that. This would all be so much easier if I were queer! But I’m not.)

In addition to talking to him about this, I’ve spoken with my therapist and several friends. But I want to sharply limit the amount of emotional labor I ask of him while I figure this out.

I guess my question is: how do I deal with my fear of being a terrible person to someone I really care about, in order to find out what this could be?

I want to start by telling you that it’s clear from your email how thoughtful you have been and continue to be as you explore this possible relationship.

Whether it’s with him or someone else, I applaud you for taking your time, for being considerate, and for working on healing from sexual trauma.

The work you’ve been doing is the groundwork for a healthy relationship.

There is no way to know how you will feel about him sexually. I believe that the chemistry will either be there or not, and that has little to do with genitals. We get caught up in thinking about attraction to genitalia, and that’s true to a certain extent. But that physical chemistry we feel comes from our nervous system and brains. We become sexually attracted to people through a combination of — intelligence, humor, personality, pheromones, and, yes, physical attraction.

Try, if you can, to remove genitalia from the equation.

You feel close to him emotionally, you may have romantic feelings towards him, but you are unsure if the physical attraction is there. The same could be said of you and a cishet man, or any other person, regardless of gender.

Wanting to figure out what you feel would be a part of the process with anyone you date.

I appreciate so greatly that you do not want to cause him harm or pass off additional emotional labor as you work to clarify your feelings. You can do so respectfully by being thoughtful, communicating clearly, and evaluating what you feel for him, separate from his gender identity.

It sounds like you are doing those things already. Working through this with your therapist is the right move. Your instincts are working, telling you what you need to do to be respectful of both of you.

Now, to directly answer your question:  “How do I deal with my fear of being a terrible person to someone I really care about, in order to find out what this could be?”

Do what you’ve been doing. Stay open and honest with him, with your therapist, and with yourself.

He has told you that he’s willing to take the risk. I believe this is worth exploring. If you find that it’s not working for you, or the physical attraction is not there, communicate that. You can do that without making it about his gender.

The information within Ask Erin should in no way be interpreted as medical advice because I’m not a medical professional. But I am here to help — to share with you the wisdom I’ve gained after years of making mistakes. If you have a question for me about relationships, addiction, dating, friendships, depression, parenting, sex, consent, what I’m watching, what I’m reading, turquoise, or anything at all, use the contact form below or email me at  askerin@ravishly.com. As always, your anonymity is golden. Lastly, I’m so excited to share with you my Ask Erin Self-Care Guide, free when you sign up for my weekly newsletter. xoxo

If you like this article, please share it! Your clicks keep us alive!
Tags
Ask Erin
cis/trans relationships
dating while trans
Transgender