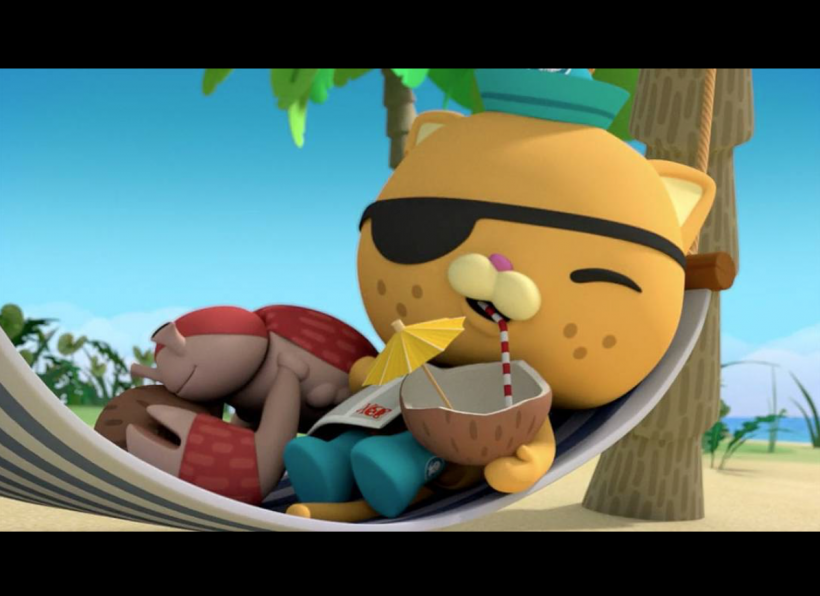 One day, my daughter wandered up to me: “Mom, did you know that the Mariana Trench is the deepest, darkest place on Earth?” (Image Credit: Instagram/disneyjunior)

Before I had children, I envisioned myself as a perfect mom.

You know how this goes. Though I’ve never once baked cookies outside of Christmas, I pictured myself regularly getting my momly groove on in the kitchen — pristine tots with ringlets and bobby socks singing,rosy cherub cheeks upturned to the heavens, while we frosted hand-crafted sugar cookies designed from out their endless depth of artistic wonder and boundless talent.

We would be museum regulars, obviously.

We would read in colorful nooks filled with oversize cushions, the smell of peppermint popsicles all around, tasteful, magical unicorn kisses sprinkled about.

I mean, this is how you think you’ll be.

One activity I furiously chided in these ludicrous daydreams was the watching of television. Heavens to betsy, NO. My kids would be doers, not passive recipients of the chaotic, acid-trip deluge of neon and auto-tune that characterizes most kids’ TV sedatives shows.

Reality, though. If I might rework Jeff Goldblum’s cautionary warning from the original Jurassic Park: Reality finds a way.

Mainly, you need a break. I’m going to emphasize the word “need” here, because that’s what it is. A need. A requirement. A non-negotiable life survival situation.

So, I read up on children’s television with one burning question in mind: was it all bad? Were there, perhaps, gradations on the TV-not-good spectrum?

And it turns out, there are.

I love that the conflict is centered around whether or not they’re able to rescue some exotic marine creature, not Dashi and Peso's argument over toothpaste that morning (or whatever other kids’ shows have their characters brouhaha about).

For starters, jump back and consider the fact that television is far less problematic than, say, an iPad. The designers behind tablet games and apps are working in a highly dubious ethical manner, and as a parent with experience here, I’ve witnessed my kids mildly upset when the TV gets turned off. But I’ve seen full blown breakdowns if you take the iPad away. (There’s no more kiddie iPad in this house.)

But back to the point at hand, some television shows really are better than others.

One quality to look for is a show free of intrapersonal drama. Studies have found that most kids’ television shows center a character vs. character conflict. It’s like real life, and everyone makes up in the end, so it must be good, right?

Wrong. Most kids don’t follow the connection between, say, a sibling fight over a favorite toy, and the eventual conclusion that sharing is caring, we love each other deep down, let’s all sing Kumbaya now.

So that was Step One for me in determining what my kids could watch. And it makes it easy, because it rules out a lot. Everything from Sofia the First to Arthur (Arthur, for crying out loud!) really centers intrapersonal conflict. Watching it led kids to exhibit more aggressive behavior after the fact.  And that’s not what you want.

Step Two on the road to okaying a TV show: do my kids learn anything? Were they gaining exposure to the wider world? Were they coming away from each episode slightly better informed?

There are some really benign shows that are basically pointless. I don’t want to name names (Teletubbies, okay, no more names), but you know what we’re talking about here.

And Step Three: Do I like it? Do I find this show engaging? Can I theoretically sit through an episode with them?

And the show that best answers all those questions, I’m so excited to tell you, is Octonauts.

Octonauts follows a group of international animals who work in an underwater lab together. Their motto: Explore. Rescue. Protect.

The three main characters are Captain Barnacles, a British-voiced Polar Bear; Kwazii, an Australian-accented cat; and Peso, an adorable penguin with an accent whose origins remain elusive (alright, I really can’t place it).

Related: Brace Yourselves, Kids Of The '90s, Nickelodeon May Bring Back Your Favorite Shows

We first stumbled upon this escapade in cuteness and aquatic learning last summer. We were visiting my parents, and took a chance On Demand with this Disney program. The episode was about a lost baby flamingo in a swamp, and the mission of Captain Barnacles and Kwazii to find and rescue said flamingo.

We were hooked. And not just us. When my best friend, who doesn’t have any kids herself, came to visit, not only did she watch Octonauts with the little ones, she later admitted to wanting to watch the show on her own.

I took my daughter to the aquarium in Miami, and she casually observed, “Look Mom, that’s an urchin.”

One day, my daughter wandered up to me: “Mom, did you know that the Mariana Trench is the deepest, darkest place on Earth?”

I love that they learn. I love that Octonauts has all these different accented creature. (My daughter’s favorite is Tweak, the resident mechanic, a bunny from the deep South.) I love that the conflict is always centered around whether or not they’re able to rescue some exotic marine creature, not whether or not Dashi and Peso had an argument over toothpaste that morning (or whatever other kids’ shows have their characters brouhaha about).

I also love that the television show is based on a set of children's books.

You probably already know about this show, but I’ve been surprised by how many of my friends with kids don’t. That some poor child is stuck watching mediocre claptrap when they could have Octonauts is honestly the reason I wrote this whole piece.

So if you’re looking for a TV show you can put on for the kids and feel less guilty about, or just a happy romp through the ocean for you yourself to enjoy, may I present: Octonauts.

If you like this article, please share it! Your clicks keep us alive!
Tags
Television
Kids
Octonauts
Disney