Beyond Before & After: We Do Not Think Nice Things About Ourselves 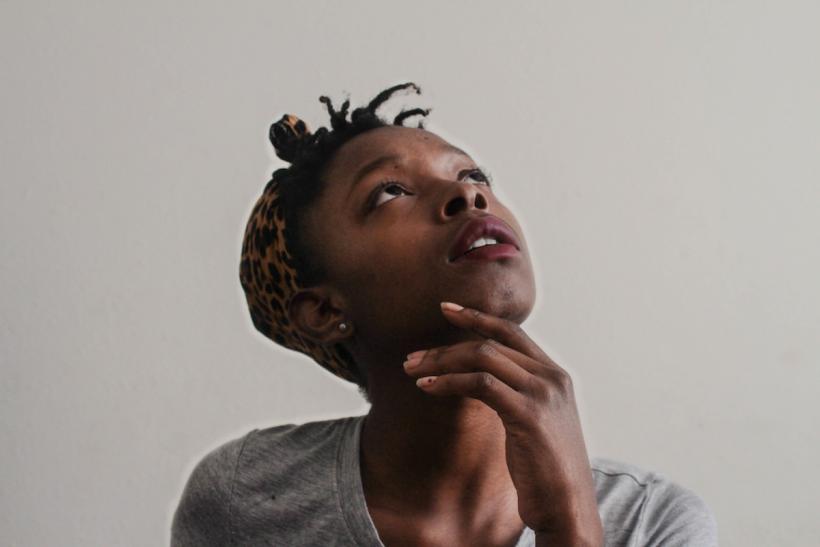 My bathroom is in my bedroom — well, not literally IN, but a part of. The toilet has its own little closet-room, but the tub and shower are just out there for everyone (including unsuspecting teenagers looking for Q-tips) to see. When I get up in the morning, I stretch and head that way, creaking and popping like the old lady I’ve become, first past the giant mirror, then past the scale.

It’s there, in front of said giant mirror, that I actually register my first thoughts about my body. The thoughts I don't even take time to register are the ones I have when I first stand up: "Am I bloated? Has my underwear crept under the fold of my belly? Should I wear leggings? Probably."

The morning thoughts vary from day to day — a few positive, but mostly not. I may see the curve of my waist and think, "Gurl, you bangin." But mostly not.

Even though many, even most, of the thoughts are fleeting, they are still thoughts. Still there. Still taking up brain space and intellectual power.

Mostly, I pass over the Gurl-You-Bangin Curve and see instead the curtain of skin that hangs below my bellybutton and over my underwear — evidence of the six humans that grew in there. I might pause to think, "Well, you sure took the days of beauty for granted" followed by the mantra, "Cosmetic surgery is stupid and expensive," and then further the thought, "What is there that can successfully tighten this deflated abdominal skin, besides the fake wraps everyone is trying to sell on Instagram. Are the wraps fake? Yeah, they’re probably fake."

Then the thought, "Why do I care?" And then the self-deprecation — first for the first thought and then for the second.

The second negative thought I have about my body happens after I leave the tiny toilet closet-room and stand either in front of or on the scale. Some days (most days) I tap it to zero and set up and think one of two things: "Still weigh the same as last week/yesterday. Phew! Guess that pie never did catch up with me. YAY PIE!" or, "Girl you better watch that pie. BOO PIE."  If the latter is what pops in, I’ll go straight to either, "Diets are stupid" (on a good day) or, "Maybe I'll continue to lose weight without dieting toward my set point — or is THIS my set point?!"

The scale and I still have work to do.

Negative thought three happens when I look for something to wear — if I decide to wear anything but leggings (which is honestly pretty damn rare).

I’ve been up less than half an hour, the sun is barely peeking over the tip of the snowy Sierra Nevadas, and I’ve already internally named at least three ways that my body is a disappointment.

Two Wednesdays ago was like every other Wednesday — shrouded in mid-week desperation — except that day was unusual because I had the usual thoughts and then stopped to acknowledge them. And that’s when this idea was born.

By noon I’d lost track. So I started again, until 4 when I again lost track. By bedtime, I’d lost track yet again, so I resolved to start again the next day. All told, I restarted probably eight times over the course of a week. I was surprised (alarmed?) to find that I was thinking about myself negatively more often than positively.

Even though many, even most, of the thoughts are fleeting, they are still thoughts. Still there. Still taking up brain space and intellectual power.

In 18 waking hours, I counted well over 30. Or I lost count somewhere around 30.

And I'm body positive. I don't loathe myself. My body doesn't cause me any real grief, at least not consciously. That's what makes this shit so profound. My eating patterns aren't disordered. I'm recovering from exercise bulimia and, with the help of my therapist and some serious pharmaceuticals, I'm stable. My relationship with the gym is, at least for now, stable. I'm not fearful that my husband will leave me because I'm fat. I'm generally at peace with my body, its size, and the aging process. I think? I thought.

About halfway through the week of losing track and restarting, and being shocked at the sheer number of shitty things I was thinking, I started to recruit volunteers to count with me — just tally the number. Give yourself a tick mark for every negative thought and report back in 24 hours. My volunteers ended up ranging in age from 17-74, straight and plus size, straight, gay, queer, men and women, parents and non-parents, doctors, lawyers, students, two real estate agents, moms home raising kids, moms working outside the home... the list of differences could go on and on. What I'm saying is that I talked to A LOT of people.

And the results began to roll in.

Just kidding. The hypothesis is that folks are unable to behave normally under a circumstance in which they are being observed. Which is to say that asking folks to record their thoughts might actually induce more thoughts. I can’t quantify this one way or another, so we’re just going to assume folks shared their thoughts honestly and that those thoughts arose as they normally would throughout a given day.

As the results rolled in, I found myself shocked...and also not at all shocked.

So here’s the data and some highlights:

Overall, all but the zero guy thought at least SOMETHING about their body that was negative, most of us said many things. Most of these people aren’t activists (but there are a few). They are just the people you see every day. The people who take care of your pets and teach your kids, just the most regular humans.

The outlier (besides that dang zero guy), a dear friend of mine, tallied 52 thoughts, mostly all about her body function. She has spina bifida and a neurogenic bladder and bowel (which is exactly as bad as it sounds). She has to self-catheterize daily since she can’t empty her bladder fully (and no one likes pee in their pants). She occasionally loses control of her bowels. If she has diarrhea, well, she has diarrhea. In her pants. She always always carries Imodium.

"Do I smell? I showered, but I still smell pee. Oh wait, now I smell poop. I gotta go home."

"Can you see my arsenal of Depends and Poise pads through these jeans? I better wear a dress."

I love this woman dearly. When I read her message to me, I cried, both because I love her and because I feel really stupid for caring about my stomach curtain. It seems like it would (or should) be so damn easy to just feel gratitude for a body that functions in a way that doesn’t hinder us, but it’s not. If it were, no one would care about their sagging stomach.

They’d just be glad they didn’t shit their pants.

If we could empathize with the people of Aleppo, the nations without food, the places where there isn't even drinkable water, and the people in our own neighborhoods — women like my friend — would we be able to forget about ourselves? Is that possible? Possibly. Is it likely? No.

What’s happening instead is that women are having an average of 26 negative thoughts about themselves. If you sleep 8 hours (HA!), that’s 1.6 thoughts an hour, and what’s really pathetic is when I see 1.6 per hour, I think that’s actually not that bad (as I’m over here one every 15 damn minutes). The dudes aren't even a fraction as obsessed with their "flaws", but they aren't immune either.

What to say about all of this? Being a human being right now kind of sucks. I mean, we have penicillin and vaccines so we don't die of things like Typhoid and the Cold Plague, which is cool, but also beauty as a social construct is kind of mentally screwing us all out of living a peaceful life in these skin sacks that carry us around. Even some of us who consider ourselves "healed" are only surface healed. When you dig under the Instagram posts and the articles about being naked, we are (translation: I am) still thinking about stomach curtains and food and fat.

I can't solve all of this in an article. Boy if I could, I sure as heck would. What I can say is: "You aren't alone."

For every shitty thing you think about yourself, there is someone somewhere having the same shitty thought about themselves. Also, I can tell you this, I know all of you. Every one of you who volunteered to help me with the non-scientific study, I know in SOME way, and I have never seen the things in you that you see in yourself. Your saggy stomach has not even crossed my mind. Your barrel chest, skinny chest, man boobs, small boobs, acne, nose, freckles, thighs, have never made me think less of you — or of you at all, because I've probably never even noticed (except if you have small boobs, which I definitely have noticed because I long for breasts that don't need a bike helmet to hold them up).

What I can tell you is that you're more than your body. You are more than the skin covering your bones, which house the most important parts of you — your heart, your brain (even if it's kind of screwed up). I can tell you that your body is the last on the list of things you are; even if you see it as the first thing, it's not. Even if I can't believe that about myself all the time, I can believe it about you.

If you like this article, please share it! Your clicks keep us alive!
Tags
BB&A
Beyond Before & After
tally
negative thoughts
experiment
body image
Body Positive