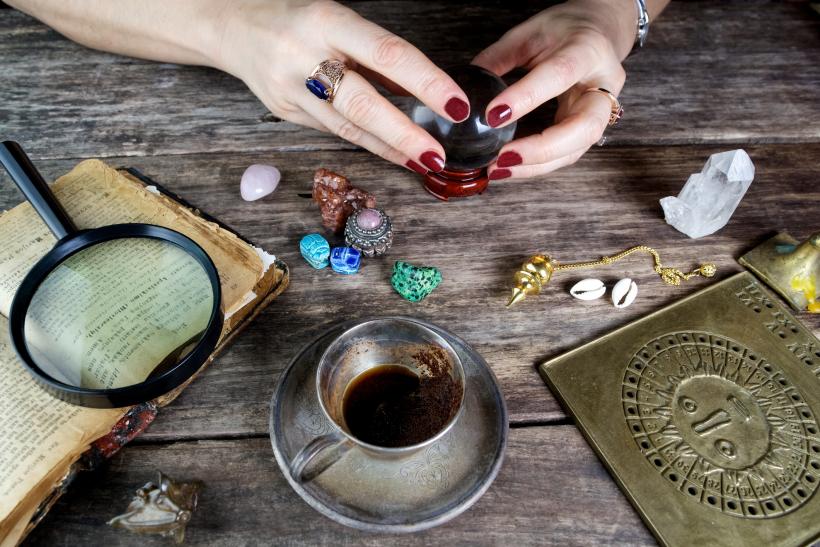 We’re sitting at the dining room table when my wife and I try to explain Halloween to our two-year-old. We took him trick-or-treating last year, but it seems unlikely that he’d remember that (although his memory often surprises me, so who knows). In the next room, our family altar sits, with a few seasonal harvest related trinkets, next to a pile of miscellany that I really need to take to the upstairs closet one of these days. We are two witches trying to describe a key part of the American secular childhood to a kid who sometimes interrupts conversations to shout “rock and roll!”

I try hard to think about what the world must look like from his perspective, to remember that he has no context for any of this.

“It’s a special day when you dress up in what’s called a costume… a costume is a special outfit you can wear to pretend to be someone you aren’t… or something you aren’t.” I’m not sure I’m doing this as well as I’d hoped. My wife nods hard then adds “Like, you could dress up as a dino, and pretend to be a dino.” This suggestion elicits roars of laughter from the toddler in the high chair. The idea that he might dress up as a dinosaur being, apparently, the most ridiculously funny thing he has ever heard. “It’s fun!” my wife says with a smile.

We list off a few other ideas (bear? truck? lion?) but he finds everything to be just as absurd as the dinosaur idea. I’m pretty sure we’ll have to chat another day, when he suddenly looks up at me with wide eyes. “Bunny?” he says, in his adorable and perfect baby voice. “Are you saying you want to be a bunny for Halloween?” “Yes.” “Ok, then we’ll make you a bunny costume.” “Yes.” He repeats, full of toddler conviction. I feel suddenly really proud to have managed to explain this to my kid, and to have a costume idea that was all his, no less.

But something is bothering me. “You know…” I say, looking into his wide blue eyes, “There is another special holiday, that actually happens on the same day as Halloween, and it’s very important.”

I’m a witch. I started practicing witchcraft at the tender age of fifteen, after my parents finally connected our clunky desktop to the internet, and I was able to read about comparative religion to my heart’s content. My personal faith has grown and changed a lot since I bought my first Wicca book (if you’re curious, it was Wicca For the Solitary Practitioner, By Scott Cunningham, though I no longer recommend his work because of how casual he is about cultural appropriation). I no longer specifically identify as Wiccan, but I’m still pretty darn pagan, and I’m still a witch, a kitchen witch.

I still deeply need to observe the holy days on the wheel of the year. Samhain takes place on October 31st, or November 1st, depending on who you talk to. It’s the older Celtic festival on which Halloween is (probably) somewhat loosely based, and like many pagan holidays, neopagans have pieced together bits of what we know about the history and mixed that with a lot of guesswork. Samhain is about transitions, specifically the transition from life to death, and the transition from autumn to winter. For many witches and other pagans, it’s one of the holiest days of the year, and some consider it to be a “pagan new year” of sorts.

How am I supposed to teach my child about the sacredness of change and death while he’s running around in a Bunny Costume collecting candy, though?

For me, Samhain is about respecting on the sanctity of death, a particularly tall order in a culture that seems to largely want to forget about the reality that we all die. On Samhain, we reflect on loved ones who have gone before us, and also our own mortality, as we see it reflected in the changing seasons around us. It’s the last of a series of harvest holidays… and it’s time to settle in and get ready for winter. You may have heard that on October 31st the “veils between the worlds” are thinner than usual. For me (though I obviously can’t speak for all witches) that doesn’t really matter… what matters is that life and death have always lain side by side, two halves of one whole.

A tree can be growing and dying both at the same time, and on Samhain, that reality feels more obvious and solid.

My first Samhain after my grandmother’s death, I took time to reflect on her life, and her transition out of it. It gave me the space I needed to process the loss of a woman who had been my hero my entire life. I told stories about her and celebrated her life, and I listed her name for the first time with those who had passed on before.

And now, on that holy and sacred day, my kid is going to dress up as a bunny and get mini snickers bars from the neighbors.

Usually, I manage to embrace the contradictions of my life pretty fully. I’m ok with the fact that I’m the hippie mom on the block who also keeps Oreos in the pantry. I’m done feeling conflicted about being a witch who sometimes goes to a Zen temple. But this time of year, it sometimes gets hard, and as my kid grows, it’s getting harder.

For most of the other pagan holidays, the struggle is just to find the time and space to celebrate them. As a member of a minority religion, I know I can expect to have December 25th off work for Christmas, but getting the 21st off for Yule might be tricky. I want to decorate eggs for our family altar before Ostara (the spring equinox), but most of my friends and family won’t be ready to think about such projects until closer to Easter. I find workarounds; I’ve been doing this for a long time. I try to share my faith with my child and show him that our holy days can be just as special as those that are officially sanctioned. But at the end of October, the conflict becomes starker.

Christians love to complain about the secularization of Christmas, the way the focus on presents takes away from the true meaning of the day. How am I supposed to teach my child about the sacredness of change and death while he’s running around in a Bunny Costume collecting candy, though?

I grew up celebrating Halloween, dressing up and going trick-or-treating with my best friend. My mother had these ancient hardboard and paper decorations, silly ghosts saying “boo!” in comic book style speech bubbles, that she put up every year. I remember it fondly. I remember the smell of pumpkin, the way the carving knives were never sharp enough, the way the seeds and “guts” felt in my hands and how I begged my parents to please do that part for me. As a Midwestern kid, I also remember being pissed off on the years when it was snowing and my mother wouldn’t let me go out in my costume without my winter coat over it.

I don’t want to deprive my child of these magical memories — I just also want to light candles and talk about our ancestors, and I’m not sure the two things are compatible. So, I’m observing another tradition of motherhood: I’m worrying about it.

Last year, my kid was only a year old, and I promised myself that I would find a way to do both holidays in one day. Instead, we put the finishing touches on our family costume (we went as Peter Pan, Wendy, and Tinkerbell) just as the neighbor kids showed up in theirs.

Before we knew what hit us, we were tucking our child in for the night. I exhaustedly turned to my wife and asked where the day had gone.

This year, I’m not sure how we’ll handle it. But I do know one thing for sure. This year, on October 31st, I’m dressing up as a witch.

If you like this article, please share it! Your clicks keep us alive!
Tags
Halloween
Samhain
Wicca
Wiccan
Witch 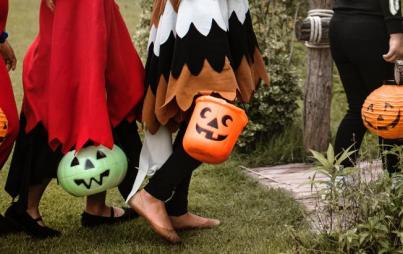