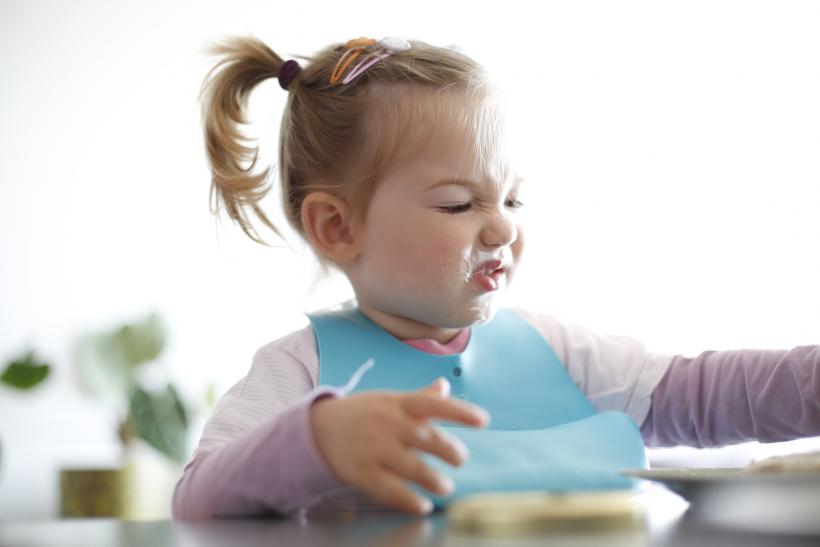 I love toddlers. They’re creative, weird, opinionated, and stoked to learn about their world. However, there’s no denying that parenting a toddler can be challenging. Toddlers live on the cusp between babyhood and childhood, and all the things that make that fun and exciting also make it hard as hell.

Life with my toddler is no exception. We have bad days. There are epic meltdowns. I have stood in a pile of blocks crying “why can’t you just put your pants on?”

That said, there’s one battle that I don’t have with my toddler — the battle over food.

It’s an accepted truism of parenting that feeding a toddler is hard. When exhausted parents gather to compare our wounds and shake our heads in dismay, food always comes up. Phrases like “I can’t get him to eat anything!” and “She’s decided she only eats chocolate!” are not uncommon. Parents are constantly trying to find things their kids will eat, and they’re resigned to the fact that mealtimes will be a struggle.

I was one of those extremely picky kids, the type of kid who has a “foods I don’t eat” list way longer than her “foods I do eat” list. Growing up, I dreaded mealtimes because I knew they would come with the pressure to eat “just three more bites” and the pleading to “just try it!” I was terrified of new foods and suspicious of most foods. I frankly just hated eating, and the more I hated it, the more stressed out my parents became, and the more pressure they put on me.

It was a vicious cycle, and not one I was eager to repeat with my child. I wasn’t sure what else to do, so I was thrilled when a friend turned me onto the work of Ellyn Satter, a registered dietitian and family therapist with almost 50 years of clinical experience.

Here are six tips that can serve as a basic outline of how most parents can strategize to help their kids eat “better” and to calm the heck down when they don’t. Most of them come from a combination of Satter’s work and my personal experience.

This is by far the single most important thing to remember if you want to stop having mealtime fights with your toddler (or any age child). As parents, we get to decide a heck of a lot of things for our kids, but we don’t get to decide what or how much they eat. If that sounds radical to you, it’s because it kind of is.

Most of us accept that part of a parent's job is to make sure their kids eat enough of the right things. Here’s the thing though — if you believe in practicing consent with your kids (and I do) then they need to be able to consent to what goes into their bodies. There are obvious exceptions to this, like medications, but at the average meal, the illusion that a parent needs to force one or two more bites into a kid is just that — an illusion.

Toddlers are at a developmental stage in which they are desperately trying to exert some control over their lives. A really basic place they can exercise control is deciding what they are going to eat and what they aren’t going to eat.

Ellyn Satter refers to this as the Division Of Responsibility In Feeding, and it is the cornerstone of the rest of her work. The basic idea is that parents are responsible for the what and the when of meals, and kids are responsible for whether or not they eat and how much. The average two or three-year-old is more than capable of handling that responsibility if we just give them a chance.

2. Stop Being Your Kid’s Caterer.

Here’s the trick. When you give your kid responsibility over their own eating, you have to keep up your end of the bargain. That means the parents decide what is for dinner. The goal here is to give your kid the opportunity to sample a wide variety of foods without forcing them. That doesn’t work if your three-year-old is demanding mac and cheese every single night, and so that’s all you’re making.

Plus, as any parent knows, toddlers are quick to change their minds about what they want.

In her book, Secrets of Feeding a Healthy Family, Satter recommends offering at least one familiar option at every meal. I like that, because it removes some of the pressure but also allows parents to cook what they want without being limited to the kiddie menu.

The key here is that you make the decision and then stick to it. If your kiddo says “I want something ELSE!” you don’t run back into the kitchen. Instead, gently remind them all of the foods in front of them are their options right now, and if they don’t eat them, there will be another chance to eat soon.

Of course, none of this really works if your three-year-old is munching granola bars all day. A kid who grazes morning til night often isn’t hungry and has no motivation to try new foods. This is probably the hardest part of this particular feeding strategy and the one that turns parents off the most: you need to have set family mealtimes.

I won’t bullshit you here — this is work, especially if it isn’t your norm already. But it is important and doesn’t have to be as daunting as it seems. Lots of people think “family meals” sound impossible and old-timey, but it doesn’t have to mean that Father gets home at 5:00 and Mother has dinner on the table by 5:30! All it means is that when it is time to eat, whoever is home sits down and eats together.

For a growing toddler, three meals and two snacks per day is typical. Generally, you want about two-three hours between meals and snacks so your child isn’t starving and crabby. In my family that looks like breakfast sometime between 7 am and 8 am, a midmorning snack at 10 am, and lunch around 12:30. Our two-year-old still takes a nap, usually around 1 or 2 pm and is up again by 4:30, at which point he has another snack. We have dinner as a family around 7 pm, but families with an earlier dinner time might need a before bed snack too.

4. Work On Your Poker Face.

It doesn’t always seem like it, but toddlers really want to make their parents happy. They pick up on our stress, and sometimes they internalize it. If you are pleading with your child to eat their baked potato, that’s putting pressure on them and not allowing them full responsibility over whether or not they eat it. Similarly, if you are stage whispering “I don’t know what we are going to do she’s not eating!” to your spouse, your kid is going to pick up on that. Young kids can get the idea pretty quickly that they have to eat things “to make mommy happy,” which is pretty much never why they should be eating.

Stop, take a deep breath, and keep your feelings about what your toddler does (and doesn’t) put in their mouth to yourself. Remember to respect and trust your child, and when you can’t do that, fake it til you make it.

Likewise, do not demand that your child try “just a bite” of something before rejecting it, don’t go on about how hard it was to prepare and how all your hard work is going to waste, and don’t shake your head while mournfully announcing “you’ll be hungry later.” Just try to stay calm, and enjoy your own meal. Hopefully, you made something you like.

5. Comfort Yourself With Cold, Hard, Research.

I’m just one mom, but these ideas didn’t come out of nowhere. Satter has researched them extensively and seen results with real families in real time.

What Satter found time and time again, was that parents were panicked the child was eating too much or not enough or not the right things because they were focused on individual days or individual meals. When analyzing children’s diets, Satter asks for a week-long record of what the kid ate: “The food record generally looks pretty strange: a bite of this, a cup of that, no vegetables, lots of vegetables. However, I consistently find that the week’s intake adds up to a nutritionally adequate diet.”

Personally, I like to remind myself of that every time I watch my two-year-old tear vegetables off a slice of pizza.

Toddlers love predictable routines, which means that once you establish a regular meal schedule, your kiddo will probably look forward to it. Unfortunately, that also means that changing routine is a little rough. If your kid is used to being able to run to the pantry and grab a bite to eat whenever, they’re going to be frustrated with set meal and snack times at first. But just like with any other routine change, if you stick with it, they can and will adjust.

These recommendations aren’t all that far off the beaten path of what is usually recommended for feeding toddlers, but in my experience, they are different than what most parents do. I won’t promise that this will turn your child into some kind of mythical gourmand who loves steamed vegetables and finds candy to be far too sweet — that probably isn’t going to happen.

From my perspective, it breaks down like this. Sure, my toddler doesn’t always eat everything that’s put in front of him. That’s normal. But he’s getting enough nutritious food to eat, he has a good relationship with food, he trusts himself, and we aren’t fighting. Seems worth it.

If you like this article, please share it! Your clicks keep us alive!
Tags
Kids
toddler
Food
eating
mom
motherhood

Candles Or Candies? Celebrating Halloween As A Mom — And A Witch
David Minerva Clover