How OCD Has Shaped My Relationship With Food 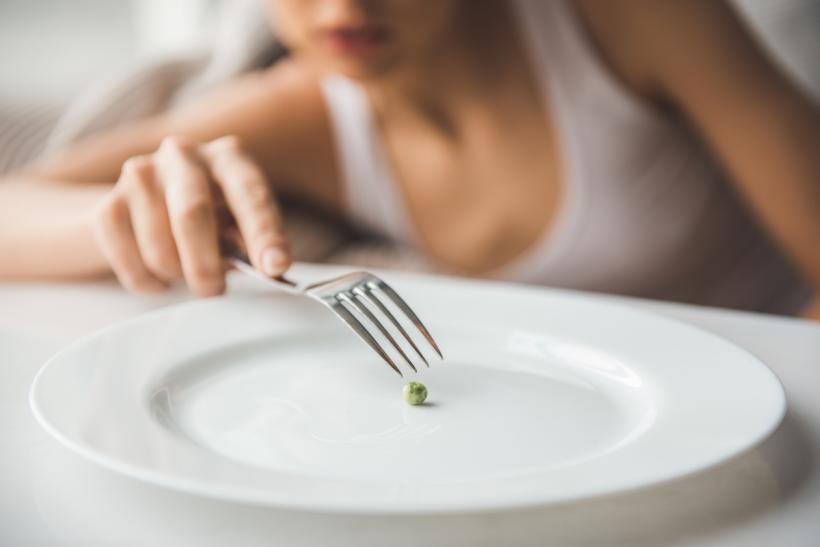 I haven’t had an appetite for almost three years, but last week I ate a full plate of beef stir-fry so good that my eyes brimmed with tears at the joyful taste of it. I ate three meals and snacks that day — at least, I think I did. I don’t really have to keep count anymore. I don’t keep a score, either. It has taken me a very long time to get to a place where I can do any of those things with regularity.

I don’t have a name for how I feel about food, and that makes understanding it very difficult for me. It does not settle neatly into any clinical eating disorder diagnosis, though I have no doubt that it is a disordered way of eating food. I struggle to find language that describes the messy tangle of thoughts and memories that weigh down every spoonful. If I had to tell you about my relationship with food in a sentence: I am totally and completely obsessed with it.

Most people would probably tell you that they are obsessed with food; we literally can’t live without it, so we think about it all the time. We talk about it, moralize it, try to eat less of it. And for me, obsession is almost inevitably followed by compulsion. This pattern is so consistent, in fact, that I can label most obsessions and compulsions as such without too much difficulty. I can be aware of it, stay watchful out of the corner of my eye. But when it comes to cultural obsessions like food or weight, it can be hard to separate my disorder from the world's disorder. The compulsions are harder to spot, and therefore harder to stop.

And the obsessions are just so easy — because food is everywhere: in our pantries, refrigerators, religions, holidays.

My weak appetite was the result of a mental breakdown I suffered just after leaving for college. I had panic attacks so intense that they caused uncontrollable vomiting spells. What little food I managed to eat didn’t stay down long enough to do any good, so after a while, I just gave up on eating entirely.

When all was said and done, I went nearly a week without food. I lost fifteen pounds that month — which I probably wouldn’t have noticed were it not for all the congratulations I received once I returned home. “You look so good!” people would say as they passed me by at church. My appetite never quite seemed to recover. To this day, the sound of another human vomiting turns my bones into ice.

There are few words capable of describing how it feels to vomit when there is nothing left in you to give up, to feel your body ache for relief from the muscle spasms and stitches tied into your gut. It makes joyful eating something attained only in delirious, half-starved fever dreams. It is not an easy experience to recover from.

This is not the first time my appetite has ghosted me, and it’s certainly not the first time nausea has governed my diet — or my life. My parents joke that as a baby, I could throw up on command, a defense mechanism that was quite literally sick and twisted. That pattern continued throughout my childhood and into adolesence, morphing from petulant childhood outbursts into neurotic and compulsive purging. While I (thankfully) don’t remember much of my earlier daliances with anxiety- or tantrum-induced vomit, the scenes of it that I do recall all circle around one location in particular: church. I can remember wailing against the rough, textured wallpaper in the hallway outside the nursery, so scared that my mother had disappeared and left me with strangers who cooed songs that we sung much better at home. How the nervous butterflies in my stomach turned leaden and collapsed into a knot of terror in my gut.

"Any time I ate more than I thought I was supposed to (which was often), I was wracked with unspeakable guilt."

It's the very same hallway that I stood in as an adult, defeated and ashamed in the wake of my breakdown. “Well, that’s a nice consolation,” I remember one woman saying after asking me about how I managed to lose so much weight so quickly, a shrill laugh forced through the corners of her mouth as she gaped at my suddenly shrinking waistline.

Mormons are not a thin people, something I was well aware of growing up. We can’t have coffee or alcohol, so we reach for ice cream instead. Our food is laden with cream and potatoes, cheap and hardy meals fit for big families with small budgets. But the same Word of Wisdom that bars us from smokes and booze also encourages a diet of little meat and plenty of fresh produce and grains. As a kid obsessed with rules and righteousness, this lesser known edict plagued me with every indulgent bite I ever took.

It meant that the ice cream we ate so often — that I loved so much — was sinful and bad and forbidden.

I took Fast Sundays to be our penance for falling short of God’s code of conduct. On the first Sabbath of every month, members are supposed to fast for two meals. Some women joke that this helps them with their diet. I took it to mean that a meal skipped was a meal God would approve of, and thus began a long and troubled history with compulsive fasting.

Two meals is a lot of food, especially for a kid. My fasting was fraught with failure, and I awaited God’s mighty punishment whenever I slipped and took a gulp of water from the drinking fountain or hungrily gobbled down mountains of toast the minute I got home. Any time I ate more than I thought I was supposed to (which was often), I was wracked with unspeakable guilt.

And yet, there was something about fasting that I found alluring. The ache in my stomach was louder than the ache I felt in my head, and it was a way of hurting that followed the rules. Fasting was not a sin; in fact, it was the opposite. Whenever that familiar childhood nausea returned, I’d skip a meal and give it to God in my head. “Please bless my family and friends and me and everyone else I love that we will not die today or tomorrow or the day after that,” I’d plead. “I didn’t eat breakfast, and I don’t think I’ll eat lunch either.” Fast and prayer quickly became the currency I used to barter with God, whose shadow always hung forbiddingly over my internal latticework of death anxieties and fervent compulsions. Vomiting was what happened to me when I did something bad, something that made me clean after I had made myself dirty with bad food or bad thoughts. And the best way to avoid vomiting was to avoid eating altogether, something God seemed to be a pretty big fan of in its own right.

I practiced this scrupulosity for most of childhood, and I still struggle with remnants of it today. I cannot separate food and weight from religion and obsession, even after having left the Church entirely. It makes skipping a meal a moral feat. A lost appetite something to be heralded by thin and beautiful angels. Sunken cheeks and delicate bones folding into the face of God.

My appetite has made its return slowly but surely. I take a handful of pills every night that help stop me from praying and fasting and looking over my shoulder for God’s watchful eye until I forget what I was praying or fasting for in the first place. When I feel like I can’t eat, I like Kit Kats and Blue Gatorade and breakfast cereal. I eat them without looking at their nutritional information, without evaluating their cosmic worth before taking a bite. To me, eating them is an act holier than fasting could ever be.

One of the newer pills I take makes me hungry, which has led to a lot of progress in my journey to a healthier relationship with food. The psychiatrist was surprised when I told her that the side effect would be a positive for me. I’ve since gained the fifteen pounds back, plus five or ten more that I try to celebrate with the fervor and enthusiasm I used to reserve for rigid compulsive behavior. I am bigger and softer than I used to be, which is how I like to imagine God on the days I feel adventurous enough to believe.