At the risk of exploding comment sections everywhere with rage, I am about to critique yet another thing I have not seen (I don’t need to remind you about "Inside Out," do I?).

This story’s full of some crazy shit. @debbyryan is Insatiable. August 10. Only on Netflix. pic.twitter.com/MrsWMrKyYf

Bye. I’m done here. You don’t need me to say anything else do you?

You don’t need me to tell you that a show whose premise involves a chubby girl being punched in the face and having her jaw wired shut as a result, which then results in her dramatic transformation from a fat teenage outcast to a culturally-ideal Prom Queen, which THEN results in her getting some kind of (yet to be revealed) revenge, is stupid. Do you?

First of all, getting punched in the jaw only very rarely results in having your jaw wired shut.

Secondly, you can bet your sweet ass if my jaw was wired shut I’d be pouring some mother-flipping milkshakes in there on the regular. Because let’s be real, when ever in your whole life are you going to be able to say “I HAVE TO EAT ONLY MILKSHAKES” besides when your jaw is literally wired shut?

FINALLY, this is stupid.

Do you have an eating disorder? Have you ever? Know anyone who has?

Ask them how it started.

Does that sound extreme to you?

How about running three hours a day?

Or throwing up the food you’ve eaten?

Or taking laxatives until your body is empty of fuel?

What about not eating at all?

I know what your outraged-at-outrage-fingers are about to type: "But she's getting revenge! It's about how the bullies sucked! So it's ok!" Tell me, how would you feel if an actress you've grown up watching on Disney Channel wore your body as a suit? How would you feel knowing that you cannot take your body off with a costume change? That your body is only worthwhile as a stepping stone for character development? My guess is that you'd feel pretty shitty. Maybe even shitty enough to wish your jaw were wired shut.

And while we're at it, shout out to Teen Vogue for being less politically proactive than we thought. 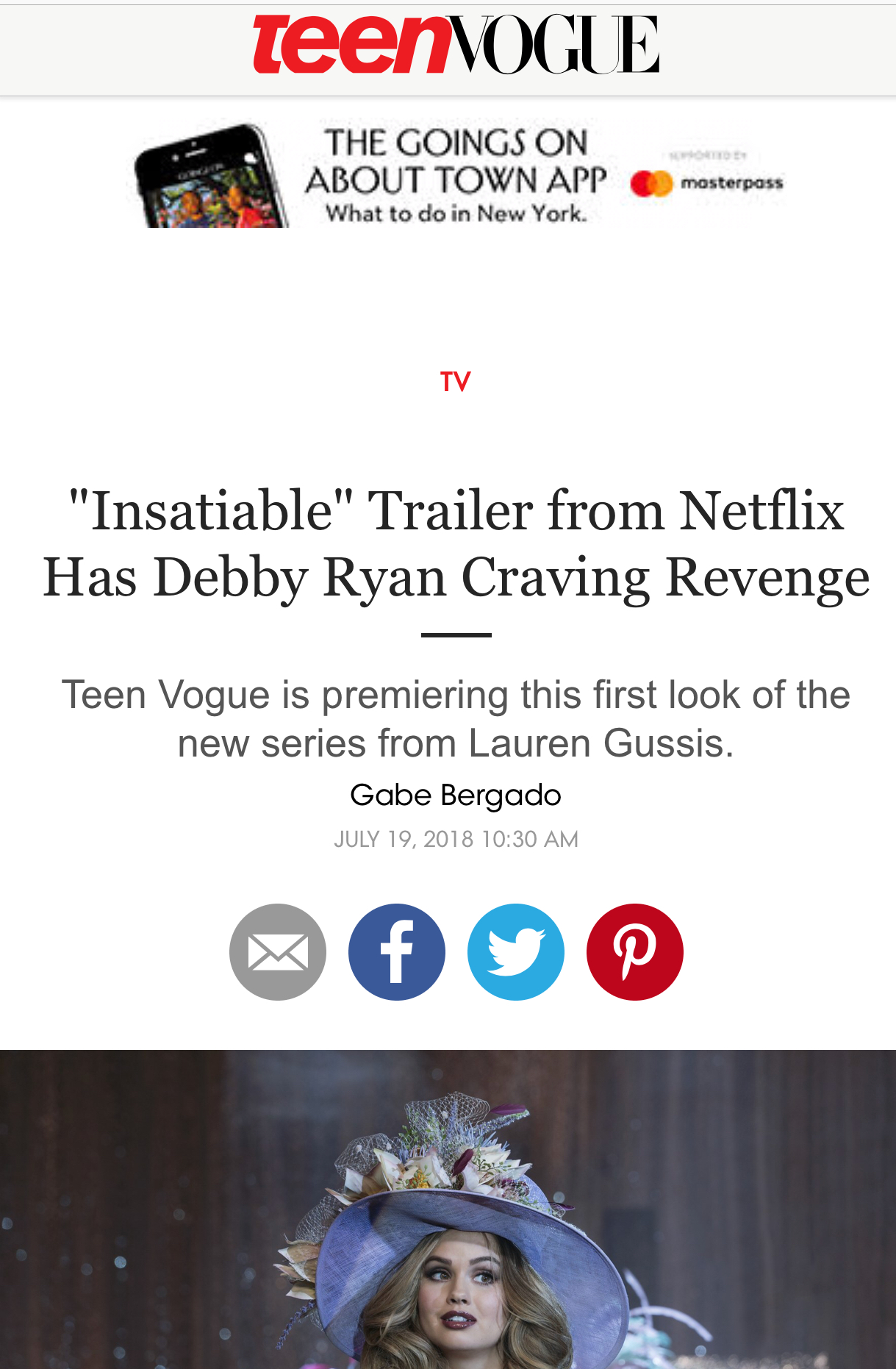 Shame on you, Teen Vogue. You're better than this.

If you're really trying to distance yourself from the rail-thin, white cis beauty standards of the fashion industry, taking the cash to endorse this show is not the way to do it.

Even if this ridiculous show doesn’t send girls (and women) down the path of a liquid diet — and it will, mark my words — the continuing narrative around fat people being powerless and prey to the popular kids is harmful and also really played out. Get some new material, Netflix.

If you like this article, please share it! Your clicks keep us alive!
Tags
Netflix
fat shaming
Insatiable
show
TV
media
eating disorder