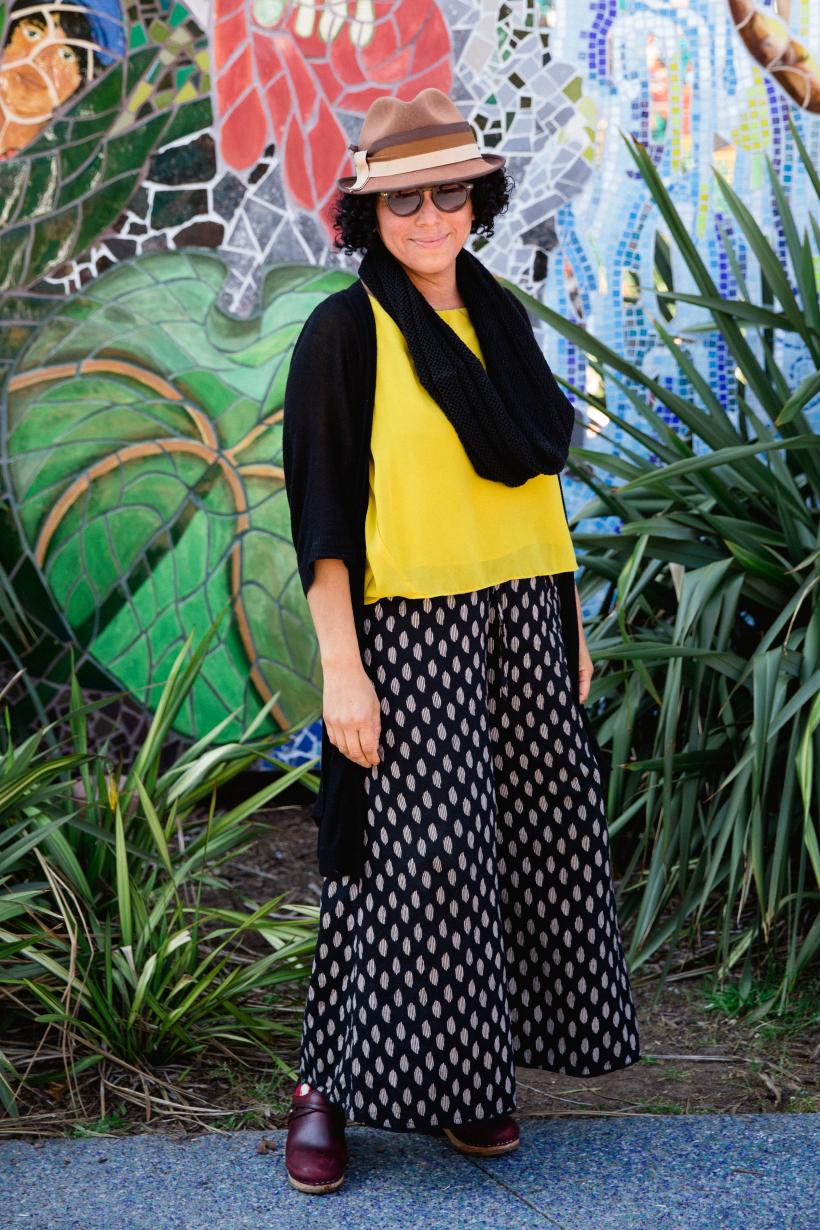 We're going to the park.

Is this your kids' favorite neighborhood park?

Maybe, it's definitely the one nearest all the food and so I think they appreciate being able to get tons of snacks all along the way. I think that's what they really like about this spot.

So you're generally hanging out in the park and enjoying the day?

Yeah! We basically eat like six times up and down the street. We get ice cream, we get pupusas here, we get pan dulce, we get coffee—or rather I get coffee! So basically we're just foraging.

What do you like about being a stay-at-home mom?

I get to spend time with my kids! I get to play a lot, but yeah it's hard work! It's lovely but it has its moments where it's beautiful. I get to capture all of the moments of their discovery of themselves, each other, and the world and it's beautiful! You also just have to pair that with the mundane tasks of making sure they don't jump into puddles that are disgusting!

Are you a local?

Yeah, when I was little we lived in Daly City, and used to come out here a lot. Now I live here and the Mission is like my home. We go to church and go shopping here, and family lives in the neighborhood.

What are the challenges of city life and having kids?

There's no nature! This is their jungle right now. There's also a lot more topics that I probably wouldn't want to talk with my kids about but I do because we encounter it when we're walking down the street. So I think urban kids know probably more about the world than they should at such a young age.

What's something you've had to address lately?

Death. We ran into an altar of someone who had passed away, and there was a fire on 22nd & Mission. So both of those events actually sparked a lot of conversation. I mean, I don't know, maybe you'd encounter that anyway, but that's some of the stuff that we ran into—literally—just walking down the street. Like, there was a fire here! And someone told my daughter, someone died in that fire! So we had to have a discussion about it, and that was a little more than I expected at her age. She just turned four so I was like ahhh! [laughs]

I was just going to ask how old your kids are!

They're two and four.

[Her daughter runs up and gives her a flower.]

So where are your favorite places to hang in the area?

I really like McLaren Park actually, which is not in the Mission. We drive out there because it's tons of open space, and it kind of feels like you're not in the city. But then other than that, we really love 24th Street. This is where we hang out. There's thrift shopping, there's other parks, and culturally it exposes them and reminds me to speak more Spanish. So we're all just getting exposed to more culture, period. We appreciate that.

Where are your favorite places in particular from this neighborhood?

La Palma, which is that Mexicatessen down the street.

Yeah! And also seriously, just like everything and anything you want is good there. Also the fact that you can get groceries right there, and then all the panaderias. There's actually one panaderia right next door to this park [points to La Mexicana Bakery], that has the best quesadillas, which are Salvadoran sweet breads that have cheese in them. It's mostly sweet, but there's a hint of cheese in there. They're delicious, and they're the best ones that I've had.

I'm from El Salvador, I was born there. Yeah, not everyone knows about quesadillas so I always have to explain it a little. My mom makes them, and those are also very good! I think I'm just re-living my childhood with my kids in some ways. There was also a time when I lived in SF when I was the age that they are now, but that was on Polk Street, which was kind of grimy from what I remember? [laughs] And I remember my mom taking me to Golden Gate Park a lot. And I think basically that I live in the city, and I try to expose my kids to parks where they feel like they get some access to nature, but this is really where they're growing up.

Just losing my patience. Having a short temper. The kids are just getting more independent and so sometimes they'll just think that they can do more than I think they're ready for, so I have to struggle between letting them experience stuff without losing my temper about it.

[Daughter runs up to show her mom some pinecones she found.]

Pinecones! Those are really beautiful!

What is some good advice you've gotten lately?

I just read the book Wild, and that was really good! I'm also like an undercover witch [laughs]. I say that because I do herbal stuff and then I do a lot of ritual stuff. That's probably truly my obsession.

Probably because people always told me I looked like a witch when I was younger! [laughs] And I was like, yeah? Well I'm going to learn some shit to really scare you then! So in high school, I was like, you think I'm a witch? Ok, here you go! And I would just throw things at people where they would be like, ok don't mess with her I think she might actually be a witch! And as time went on I realized that there was just some magic about the mystique of being a woman who was scorned and then powerful! [laughs] So then I just learned that there's practical uses for herbs and medicine that can be made at home. A lot of the spiritual traditions of using herbs in your home are totally about having a clean home and having herbs that are protectors of your home and your family. It's become more practical in use, but in the beginning it was totally just the power trip of it! [laughs]

What are most interesting herbs you've come across?

The most interesting are the flowers. Just picking the most beautiful blossoms out of a field and making medicine from them. Sensory-wise, not only are they beautiful to look at and smell, but to know that you can also distill something that is beneficial to you in some way is just magical to me. That's really the magic of working with plants.

Is there a particular flower that's your favorite?

My favorite just in terms of practicality is Chamomile. I know it's like the most common thing, but that's what makes it so amazing to me. You can find it anywhere and it has so many uses! I also forage, so for the kids, part of why I like being in nature is because I get to teach them about what plants are helpers and which plants are ones that you should stay away from. I also ask my grandmother about stuff too, and the stuff she tells me is totally witchy! Ruda—I don't know if you know that plant but you'll see it in a lot of the Mexican shops at the front door. It's this really strong smelling plant that is about protecting you and keeping evil away. I always remember that as a kid as being like an evil witch plant! But really I've learned to love the smell.

I also wanted to ask you about your personal style!

What is a mom look, really?

Exactly! What is a mom look? What do I think a mom looks like? If I were left to my own devices, I would be wearing Victorian gowns every day of my life.

Do you have some in your collection?

I have old ones that I don't wear any more because they're so delicate! You can't take them anywhere. And anyway, I'm fussy so I rip lace, which is what I like to do with Victorian outfits that I find. So that's not really practical any longer. So I've cultivated a more relaxed look. This is why people thought I looked like a witch, of course! I had big, dark curly hair and then I would wear crazy Victorian outfits, and people were like, you're a fuckin' witch! [laughs]. So that phase ended and I think I'm just influenced by other eras. I'm kind of into a more of a 20s influenced look right now. And also having a lot of protection because I spend a lot of time outside in the sun.

As for my outfit, everything is pretty much thrifted! I think the scarf is the only thing I bought at a store. I had to eBay the clogs, because I wanted to find just the right ones. I love clogs because I'm short!

The apple-patterned socks are a nice touch too!

Actually I was like, hold on, let me take off my socks! Because it was colder this morning!