Mommabare: How Do I Talk To My Kids About Depression (And Why)? 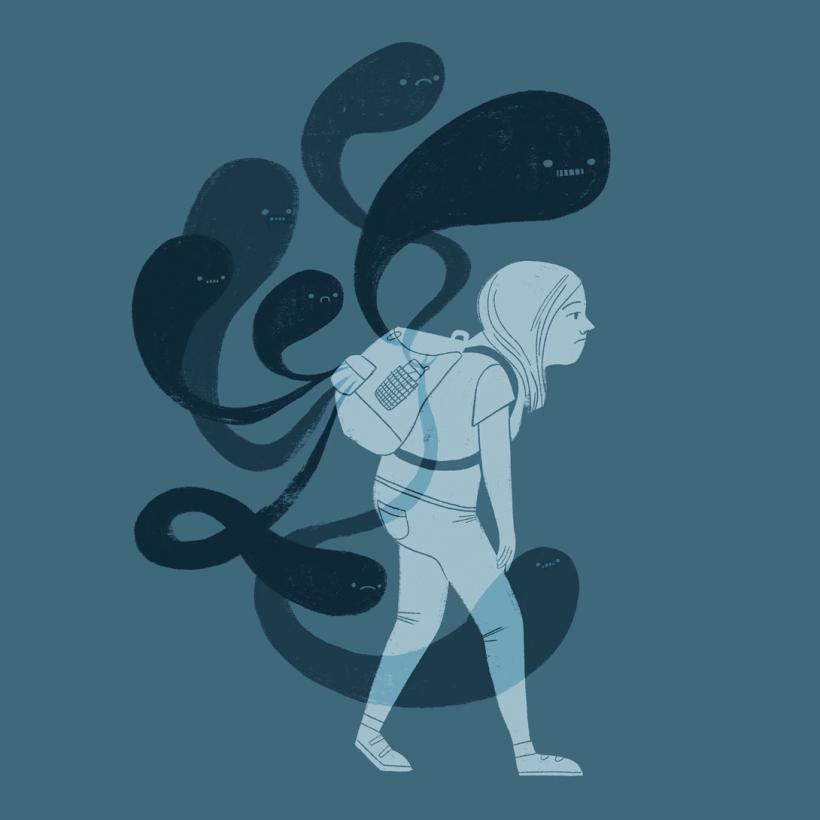 Chances are pretty good that at some point they are going to be depressed. (image credit: Julia Green)

Welcome to Mommabare, the place you come to talk about the things that should have been in the parenting manual that absolutely did not come with your kids.

I remember when my mom first talked to me about depression…

Just kidding, parents passed out on the couch can’t talk.

My mom was bipolar. She had Bipolar Disorder. Being bipolar meant that sometimes she was walking around the neighborhood, drunk and braless, half of her ass hanging out of an impossibly short sundress, with her porn-erect nipples poking through the terrycloth embarassing 8-year-old me, and sometimes she was passed out on the couch — either drunk, high, or just unwilling or able to get her shit together long enough to take care of the one kid she didn’t abort (it’s me).

I love her anyway. But she was a real caution-tape-disaster-area of a human being. (She’s not dead. I’m just referring to her in past tense because I haven’t seen her in seven years.)

She never talked to me about depression, probably because she was A. not equipped with sufficient language to do so and B. too depressed. When I had kids, I swore I’d do better than her (which wasn’t hard, but still). Part of doing better meant talking with them about uncomfortable things — things like why their grandfather is so deliberately racist, herpes, the lure of the ganja weed, and mental health.

What else would I have done?

I have also floundered, fallen, failed, and generally fumbled my way through raising five humans while trying to figure out how to even be a human. Neither of which I have perfected, both of which I am still getting up and doing every day.

Why should you talk to your kids about depression?

Well, because chances are pretty good that at some point they are going to be depressed. And even if they aren’t, they WILL encounter someone who is.

As many as 16.2 million Americans have experienced at least one major depressive episode (that’s 6.7% of the population). And adolescents are at an even higher risk, 12.8% among kids age 12-17.

You can pretend it’s not there, like that time I ignored a bladder infection so long it became a kidney infection, but at some point, you will not be able to hide from it. And believe me, it’s better to be prepared than writhing in your bed with the fiery burning pain of E. Coli making its home in your ureters.

Hopefully frequently, and ideally before you’re on the sofa in three-day-old yoga pants that smell like chow mein and sorrow, eating  your feelings, which apparently taste like a pint of Ben and Jerry’s Chocolate Fudge Brownie that you hid in the back of the freezer two months ago on a day that you didn’t want to crawl into a dark, dank  hole and die a thousand deaths. Before then.

The great thing about kids is they don’t need the layers of bullshit we apply to everything. The facts are enough for them. As is always good policy with children, answer questions as they are asked, and at the level they are asked.

For example, if your child asks you why you look sad, you don’t have to create a scale model of serotonin and detail the physiological mechanism whereby the synapse transports said serotonin along a superhighway of neurons in your broke-ass brain.

You can just say, “I am sad because the country is a dumpster-fire and our president keeps pouring Kingsford lighter fluid on it like he never saw the caution that is printed in bold on the back of the canister about how it will explode right in your face” OR “I’m 43 and don’t know what I’m doing with my life besides failing at raising you and paying taxes, and we are one paycheck away from living in a tent behind the Walmart” OR “well, I don’t know why I’m sad. I just am.”

I don’t know is an okay answer.

I think we don’t like “I don’t know” because we feel like in our vast life experience we should be able to explain things like selective serotonin reuptake inhibition, but our kids don’t expect that. And if they do, that’s why God invented YouTube and people with sophisticated recording equipment and mic pop-filters and loads of spare time and nothing better to do with it.

If your kids are old enough to understand that you have hormones in your brain that tell your body to do things like eat and pee and not run into traffic, then tell them about the hormones.

Kids are the purest of all humans. Truly. They could probably do a better job of explaining your depression to you than you can them. The key to talking to kids is to be open to the conversation.

That means you really need to remind them that if you are sad, it’s not because of them. And for the love of god, if it IS because of them, just don’t say anything. Take that shit to your therapist. My mom once told me that she wished she aborted me because her life would have been worth something if she hadn’t been a mother.

But also they aren’t so jaded that they think everything is a lie. They will believe you when you tell them that it is okay and normal to be sad, that sometimes you need medicine to help, sometimes you need to talk about your sad feelings with other people, and that if they are sad, they can talk to you.

If you’re having this conversation with older kids, go ahead and talk about suicide. Don’t leave out the ugly parts. What’s more terrifying than feeling utterly hopeless? Thinking no one else in the world feels utterly hopeless. Tell them about the kid you knew in high school who took a bottle of sedatives. Tell them about the time you stared down a bottle of sedatives yourself. Tell them that’s a scary feeling and not one you have to live with but also not one that is exclusive to them.

Being a teenager is downright miserable at times. Don’t forget that.

And don’t forget to keep talking. You’re doing your best. What else would you do?

If you like this article, please share it! Your clicks keep us alive!
Tags
Mommabare
Depression
parenting
Kids
talking
conversation
mental health
advice