What I Wish Other People Knew About OCD 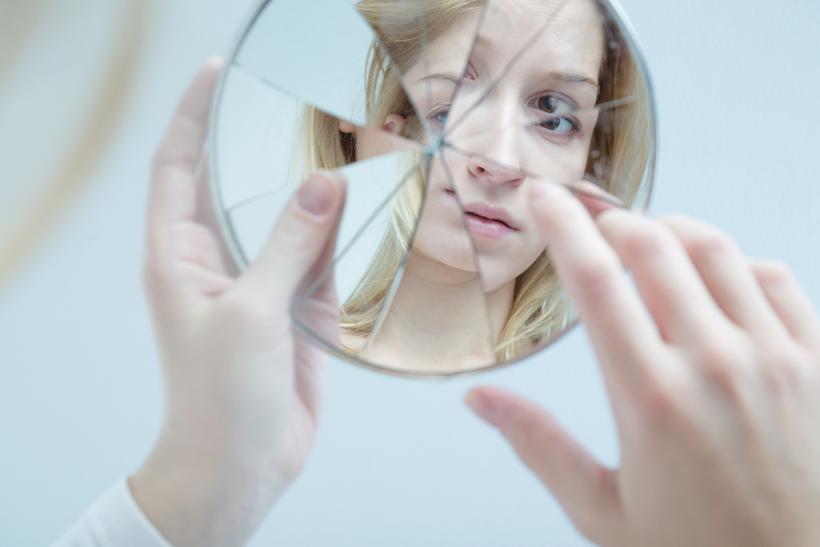 It starts like an itch. Something feels wrong, and I need to make it right again.

I stumble home from a party half-drunk and fully stressed out. Parties are hard for me — there are a lot of people, nobody has the same music taste, and I can’t take so much as an ironic JELLO shot without buckets of former-Mormon guilt pouring over my psyche. But I still try to go to them because they make me braver and I get to let loose with my friends in a way that I never thought I’d get to when I was growing up. Still, a night out is incredibly draining, and I typically spend the next 36 hours replaying every single thing I might maybe possibly have done wrong or awkwardly.

It starts like an itch. Something feels wrong, and I need to make it right again.

I reach up (with my right hand — always the right hand because it’s, duh, “right”) and blindly search for the pull string in the dark, trying to turn on the light so I can find my way to the bathroom and wash what’s left of my makeup off my face. The itch gets worse. When I find the string, I pull. And then I keep going, turning the light on and off in sets of three. The itch isn’t gone, so I keep going, forgetting why I even wanted to turn on the light in the first place. I let out a sigh of relief involuntarily, the steam of obsessive energy leaving my body in a long exhale. I keep pulling on the light. 15 times. 30 times. I get worried my landlord will be woken by my makeshift strobe light and switch to tapping my phone after setting it down on the bookshelf.

I wait for the compulsion to run its course, exasperated with myself for needing something so silly and unusual to decompress. But I allow myself the indulgence of these aimless compulsions; after a full night socializing and doing things that generally feel Not Allowed by the strict moral code I’ve spent years burning into the contours of my skull, my OCD has had enough of being pushed to the backburner. It’s time to be a broken record again.

OCD is tailor-made for iceberg metaphors.

All other people can see are the compulsions, and even though they look pretty awful from the outset, they are nothing compared to the frozen behemoth underneath the water. And like icebergs, OCD is always there, lurking beneath the glassy water in wait of unsuspecting sailors. In most cases, including mine, people are born with it. Our brains can’t let things be, so we live in cyclical thought patterns — stuck, frigid, and frozen in a world better suited for fluid currents of water.

Some of my compulsions are like nervous ticks. I do them almost from muscle memory, as routine and commonplace as brushing teeth. They are embarrassing to admit to, but ultimately innocuous coping mechanisms built up over the years. They probably started out as externalizations of specific obsessions, but now they just help keep the aimless obsessiveness that is my brain’s default setting abated. I call them maintenance compulsions — the tapping, the counting, the checking. Often when a compulsion moves to this “maintenance mode” of sorts, it means that it’s on its way out entirely — either gone forever or left dormant until life demands another ritual to keep the universe in balance. This is the part of OCD that is easiest to talk about. It’s something a lot of people can relate to; everyone has passing ticks and peculiarities they pick up along the course of their life, and while I may have more than most, the Internet can easily show you that I’m not alone in finding satisfaction and release in a properly locked car door. But then there are the intrusive thoughts, the unrelenting moral code, the rituals that eat up hours and days.

On those days, you don’t go to the party at all. You stay home and pick at your face for four hours instead.

I have countless scraps of drafts in which I attempt to write about this — about what lives at the heart of OCD — and I can never manage to write something that does the bastard justice. I see memes about myself all the time, pencils set straight and M&Ms separated by color with the caption, “I have CDO — it’s like OCD, except the letters are in the right order,” and I want so badly to be able to say, “No, that’s not what it’s like — this is what it’s like.” But that’s about as far as I ever manage to get before I put down my phone in frustration — with my right hand, tapping in sets of three until I calm down.

I think that part of the problem is that OCD so often feels like reaching toward something you can’t quite name.

It defies words by its very nature. Those memes are so infuriating to me because they present a disorder simple enough to be stereotyped. If I had the words for why I have these compulsions, I probably wouldn’t have them anymore.

I have OCD — it’s like CDO, except there’s no alphabet in sight and I’m trying to beat myself in a spelling championship. Trying to make order in a world that literally depends on chaos. Trying to find peace in a tap, a number, a light switch — anything at all.

If you like this article, please share it! Your clicks keep us alive!
Tags
#OCDame
OCD
mental illness
anxiety
social anxiety
stress
Stigma