I Just Realized Why I Hated My Stepfather, And It's Not Why You'd Think 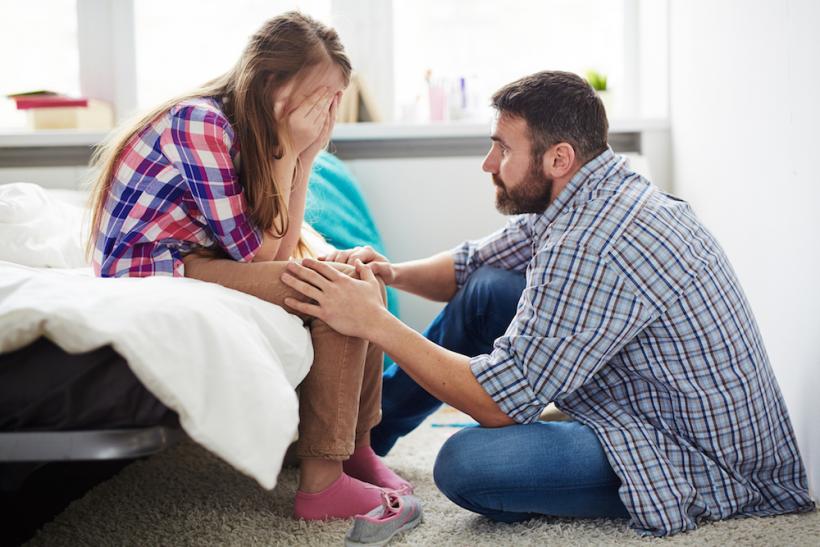 Isaac Estes was the first boyfriend I ever had who tried to put his hand up my shirt. We used to “hang out” at my house a lot. We spent a lot of that “hanging out” time, making out — me waiting for someone to walk in, him trying to get his hand up my shirt to my barely-a-breast breast through my barely-more-than-a-training-bra bra. My stepfather had what he called an “open door” policy, which did not mean what the term “open door” usually implies. His version of “open door” was more like, leave your door OPEN ALL THE TIME. I hated my stepfather. How was I ever going to get a hand up my shirt?

The “open door” policy was only one of the reasons I hated Bill. I also hated Bill when he found Isaac and me breaking the “open door” policy very thoroughly on top of my peach and gray comforter and drug Isaac out of the house by his collar. I hated him because he smelled like body odor mixed with Old Spice and because his white dress shirts had yellow sweat stains. I hated him because he was losing the hair on top of his head but was hairy as an ape everywhere else. I hated Bill because he loved my mom so much, much more than anyone had ever loved her.

I hated Bill because he loved me.

That sounds like a stupid reason to hate a person; 13-year-old girls are stupid sometimes.

The real reason I hated Bill, under all the layers of sweat-stained shirts and cigarette smoke and cupboards full of groceries and taffeta dresses for high school formals, was that he wasn’t my dad.

My dad was gone.

After my mom ended their marriage, she married another guy, Bill the First (not the Bill I’ve been talking about, another Bill, it’s complicated). She moved me into Bill the First’s house with Bill the First’s daughter Rusheen. Rusheen was a little older than me, and she liked to lick the bottom of her ice cream bowl, which my mother reprimanded her for repeatedly. My mom married Bill the First in the summer, I guess. I remember the lemonade stand we had on the corner with the kids next door. The lemonade stand landed me on the front page of the paper, looking adorable and very 1979 in my yellow terrycloth spaghetti strap jumper and my Dorothy Hamill hair. I remember the forbidden licking of the ice cream bowl and how I hated Rusheen and her stupid name and her stupid father. I remember I missed my father.

I hated him because he was all the things that I wanted my father to be.

My dad got remarried, too — to his high school sweetheart, Debbie. He was not much over 30 then — which is kind of weird to think about, now that I’m almost 43. Debbie moved to California from Ohio, which seems like a definite move upwards, but as it turned out, she hated California and missed her Catholic mom and her little brick house (and also apparently humidity and locusts). So Debbie went back to Ohio and took my dad with her.

While my dad was in Ohio being married to Debbie, who had a terrier named Mandy (after the Barry Manilow song), I was in California living with my mother and Guy of The Week/Guy of The Week’s Kids. Eventually, Guy of The Week number six or so, Bill the Second (heretofore referred to as just Bill, for clarity's sake), turned into my stepdad. I wore a pink satin tea-length dress to their wedding and had my hair in an overzealous perm. I did it happily, I guess because I liked dresses and having someone do my nails, and I guess I must have liked getting my hair done, too — which seems unlikely given the actual disaster that it was, but anyway.

Bill was all the things my dad wasn’t — professional, college educated, a UCLA fraternity Bro. He was terrible at making pancakes, great at being romantic, and just… there. Mostly he was there. Present.

If I had hated my dad, all of this would have been so much easier. But I didn’t.

I did everything but hate my dad. If anything, I idolized him. And not hyperbolically like, “you’re so great, dad” but actually, like Zeus/Venus/Krishna/random Greek god/dess — that person who the Bible explicitly says you are NOT to put before God. I think I was about 40 before I realized that he left me in California with my mother who I hated while he went to get a fresh start with a new woman, curvier and more gentle than any other woman I knew. I was about 40 before I thought that maybe I ought to have been mad at him for it.

Of course, age 40 is not the age at which you want to start being angry with your father. As an adult, I see the tough circumstances and decisions he was faced with, including being married to my mother. I know he did his best; I love him dearly. But this isn't an essay about how precious my relationship with my father is; it's an essay about the hurt heart of a 13-year-old girl who missed her dad then, and now realizes that somehow loving him so desperately turned into hating Bill so fervently.

It’s easy to hate a man who is being all the things the man you love most when you’re 13 is not.

And that is why I hated Bill. It wasn’t shirts or his ties or the way all of my friends thought he was cute that made me hate him. I hated him because when he asked me where I wanted to go to college, I said UCLA, and he immediately bought me sweatpants with “U C L A” written vertically down the leg.

I hated him because he was all the things that I wanted my father to be.

It wasn’t until I watched my kids with their stepfather, their version of Bill, that I really started to put it all together. I had to be divorced and remarried to see in my husband now so much of what was in Bill in 1986.

Now, through Matt, I see so much of Bill. I see a man who deeply and desperately loves a woman who happens to have children with another man. I see a man who knew what he was getting into and, despite being warned, decided to take on parenting someone else’s children, and even to do it gladly. I see a man willing to give up vacations and guitars and driving a new car so he can send kids that weren’t supposed to be his responsibility to college. I see “open door” policies and high school formal taffeta.

When I married Matt, and the kids screamed how they hated him, I heard my own small voice saying, “Where is my dad?” I saw my own anger toward my mom for ruining my family and the sadness I felt every time Bill showed up for something my dad did not. In Matt, I see Bill. And in both of them, I see men who were willing to be hated and to keep loving regardless.

My mother and Bill have been divorced 23 years, which is three times longer than they were married in the first place. Bill lives just a couple of miles from me and, because we share my sister, we’ve never been out of touch. A couple of years ago, I called Bill because I wanted him to know that I knew I was shitty to him. I wanted to tell him I was sorry for taking out on him all the pain and frustration I didn’t have words for when I was 11 or 13 or 15. I wanted to tell him that in the bizarre way the universe works, I see now through my kids what I couldn’t see then through myself.

If you like this article, please share it! Your clicks keep us alive!
Tags
stepfather
stepparent
divorce
blended family
parenting
Kids
families