The Sexist Drivel of X-Men: Why Can't Women in Comic Book Films Catch a Break?

Like many a glorious geek this Memorial Day weekend, I curled up inside a dark theater, watching mutants battle machines in the blockbuster nerd-fest film X-Men: Days of Future Past.

Minor spoiler alert! Days of Future Past follows Wolverine as he travels back in time to thwart Mystique from a deadly mistake that ultimately leads to a mutant apocalypse. And what, pray tell, prompted Mystique to make said mistake? Her damn emotions, which cause her to lose all reason and succumb to a crime of tear-streaked passion.

To stop Mystique, a crew of all male heroes band together to talk some sense into her, with characters literally imploring Professor X to "shut her down" using mind control. Naturally, she's also at the center of a love triangle (actually, more like a love square), since no woman can be a protagonist without multiple love interests to make her more "interesting" unhinged.

Oh I know what you're thinking: "Nikki, this is one X-Men film—there are plenty of other cool, badass female characters too, like Storm and Rogue!"

Except that the much-maligned X-Men: The Last Stand (remember that gem from 2006?) had pretty much the exact same sexist plot. Are we sensing a trend? 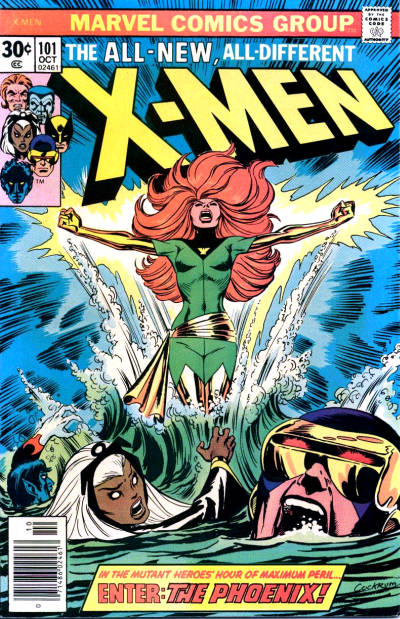 In The Last Stand, mutant Jean Gray—like Mystique—must be tamed by her more reasonable male peers. Except in her case, when she loses control of herself, she turns into "Phoenix," a batshit crazy she-monster capable of mass destruction.

To stop the crazy woman from acting crazy, Professor X represses Gray's powers. But ultimately, he can't fully restrain her, and like a souped-up version of every man's nightmare, she penetrates Professor X with her wild eyes until he disintegrates into a pile of dust.

It should come as no surprise that X-Men gleefully runs with the same tropes of emotionally overwrought, out-of-control femininity that have been playing at your local cine-plex since the beginning of film.

After all, this is a stereotype with roots in the biblical origin of our very species; it was irrational Eve who fucked up everything for everyone when she lost control of good sense and took a lusty bite of the forbidden apple.

It's just that women already have to contend with so much uber-patriarchal bullshit in comic book films, which are headlined by men every single time and routinely relegate ladies to snoozy love interest roles (Example A: Jane Foster in Thor. Example B: Peggy Carter in Captain America. Example C: Mary Jane in Spiderman. The list isn't pretty and far too long. Need we go on?)

Is it really too much to ask that when a female does have a prominent role, she not be depicted as a super-powered version of an unreasonable woman on her mutant period?

If you like this article, please share it! Your clicks keep us alive!
Tags
X-Men: Days of Future Past
Jennifer Lawrence
comic books
sexism
mystique
jean gray