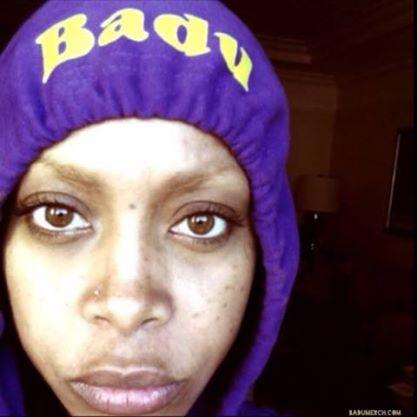 Erykah is busy putting the "Bad" in her Badu. I know, it's a little early for awkward wordplay, but alas it's all too appropriate. As a society we're all still riding high on #YesAllWomen phenomenon, so it's even harder than usual to remember that us vagina-toting lasses are just as capable of humiliating themselves and others with some good old-fashioned sexual harassment.

Case in point? The normally lovely Erykah Badu. Recently the "You Got Me" singer decided to take some utterly odd nastiness to the screen. When a TV reporter got on camera to talk about something utterly stupid (read: the ongoing antics of Shia LaBeouf), Badu seized the day and jumped behind the reporter's shoulder. She then made a vagina from her fist (a third-grade favorite!) and penetrated it with her pointer finger!

Oh and then she lunged at him and tried to kiss his face.

The bottom line is if the situation were reversed and a male singer made perverted gestures and then tried to smooch a sister on live television . . . someone would of tackled or tasered his ass. But poor Mario? All he gets is a lousy tweet.

Mostly this whole thing is just so weird. Maybe she was drunk. Or high. Or both. Or maybe she and Lebouf are in cahoots with their utterly pathetic "performance art." Hard to say. But it does server as a reminder that despite ongoing social injustices between the sexes, that doesn't give us permission to harass men.

(Even if we think people using the news for drivel like LeBeouf is punishable by finger penis.)